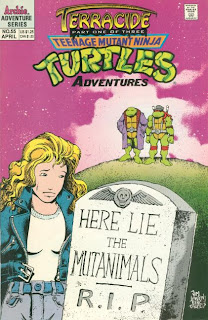 “Terracide, Part One of Three”

Chapter One: Fire in the Sky 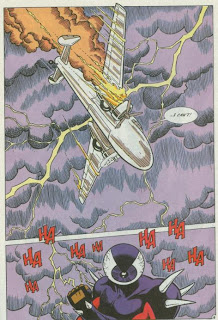 Over the ocean, Dead-Eye flies his hovercraft, shrieking about history belonging to those who create it. Inside a nearby cargo plane, the Turtles, Ninjara and Splinter rest up on their return from Israel. Ninjara tries to assure Mikey that his blindness will clear up in a few days, but he’s still in the dumps. Suddenly, an energy bolt strikes the plane and it goes down into the water. Dead-Eye laughs, victoriously.

Chapter Two: The Mutanimals are Dead!


Having just returned from the future to check up on the Mutanimals, future-Raph and future-Don find their friends slaughtered. They’re shocked, as the Mutanimals weren’t supposed to die until much later, meaning that someone is changing history. Suddenly, Slash emerges from the waves, remembering the Turtles (rather, their younger selves) from his previous battle with them and mistakes them for the killers of his friends. Slash pounces and ruthlessly defeats both future-Turtles. He is about to deliver the killing blow when Candy Fine, Mondo Gecko’s girlfriend, intervenes. She explains how the Gang of Four killed the Mutanimals after an attack from Scul and Bean. Slash relents and helps the grieving Candy bury her friends. 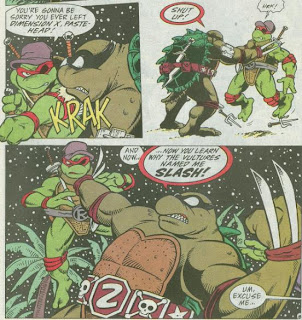 As Candy and Slash grieve, future-Raph asks future-Don if their coming back in time might have affected history and led to the deaths of their friends. Future-Don is certain that they’d done nothing wrong, as he remembered from his youth that future-Don helped the Mutanimals build their base and nothing bad came of it. He’s positive that someone is screwing with the time stream.

Leaving behind Mondo’s grave, Candy and Slash take a ride on Man Ray’s jet, the Strato-Ray, intent on returning home to New York. As future-Don pilots the jet, he realizes that Man Ray never even got a chance to test it out. Remembering that today was the day they took a cargo plane back from their first battle with Animus, future-Raph suggests they buzz the plane and startle their younger selves. Listening to air traffic control, however, they learn that their plane went down and the pilot and Michelangelo were picked up by the Coast Guard (something else that wasn’t supposed to happen).

Beating the Coast Guard to the rest of the wreckage, they find their younger selves, Ninjara and Splinter clinging to the debris. Candy and Slash help them inside the Strato-Ray and they take off before the Coast Guard arrives. The Turtles are excited to see their future selves, but their reunion comes with grim news: the Mutanimals are dead. The Turtles are shocked to hear this, and future-Don lands the Strato-Ray on a nearby sandbar so they can formulate a plan to rescue Mikey. 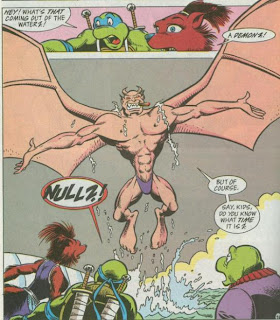 As soon as they disembark, however, the winged, cigar-chomping figure of Null rises from the ocean (in a speedo, unfortunately). Null vows to end the world, starting with them. Revealing that he orchestrated the deaths of the Mutanimals, he orders the Gang of Four to kill the Turtles and their friends in the same fashion.

*Slash references his battle with the (younger) Turtles from TMNT Adventures #25.

*Man Ray’s jet, the Strato-Ray, was another discarded vehicle design from the aborted Mighty Mutanimals animated series (although there, it was called the "Sea Ray" and may have been a sub).


“Megadeath” was the nauseating manure that nourished the stunning blossom that is “Terracide” (laid that on pretty thick, yeesh).


For as mean-spirited the conception and badly executed the final product “Megadeath” was, there’s no denying that “Terracide” did everything it could to make lemonade out of the lemons it wound up with. This was an ambitious and shockingly dark tale, built from several older plot threads and accelerating TMNT Adventures from a kid’s book that dabbled in grown up subjects to… well…

This is heavy, Doc.

Null is THE villain of TMNT Adventures. Forget Krang, forget the Shredder, forget Armaggon; forget them all. All the greatest and most daring storylines of the series were centered around this guy and he never disappointed. It often surprises me how fans tend to forget him entirely. In all the conversations I see online regarding what villains fans want to see transitioned into other universes or continuity mediums, you’ll get the usual suspects like Krang and Agent Bishop and even Hun, but Null tends to wade around the bottom of the barrel alongside, I dunno, the Dragon Lord from “Next Mutation”. And when fans think of the “best of TMNT Adventures”, they invariably resort to “The Future Shark Trilogy”. But what about the Mighty Mutanimals miniseries? “Divided we Fall”? Or, on topic, “Terracide”? All superb stories, each better than the last. All starring Null as the feature villain.

People ask me what TMNT villain I would like to see transitioned into a new comic or cartoon and I say “Null”. Of course, they respond with “Who?” and then I sigh.


In a way, I can understand the necessity for “Megadeath”. Murphy (Clarrain) needed a means to show that “the stakes have been raised” and now even characters established as early as the fifth issue of the series were suddenly mortal and could have their ticket punched at any moment. I felt it was done for shock value of the lowest common denominator, but it was shock value that served an important narrative function which paid off for the readers invested in the material. As I said in an earlier review, “the ends justified the means”


Now that long-standing characters were getting bumped off by a villain competent and cruel enough to successfully kill his enemies, you’re suddenly left wondering just how far this book was willing to go. Contrary to being the “arch nemesis” of the Turtles, Shredder never killed a damn one of his foes and most of his defeats were purely comical, even in this book (when last seen, he was vanquished by a random flood). Null was beaten twice by the joint efforts of the Turtles and the Mutanimals. So what does he do? He starts killing them. He doesn’t try to kill them. He kills them.

Right then and there, you know that Null isn’t like the other villains to appear in this book. He doesn’t shake his fist in defeat, swearing to “get them next time”. When he comes back, he takes his enemies out in strategic, efficient fashion. No elaborate, time-delay death traps. No long monologues before the fatal blow. Just ambush and slaughter.

While this sort of thing has been driven into the ground in Marvel/DC comics (killing a character is shorthand for “shit just got real”), this was new territory for TMNT Adventures and not something expected of a children’s book. And I think that’s why it has more genuine weight to it than “Jean Grey is dead. Again. Big deal.”

What’s even better about this issue alone is the build-up of tension. The Turtles’ plane has been shot down, someone’s mucking with history, the Mutanimals are dead, Slash is crazy, Mikey’s been abducted by the Coast Guard and Null’s back with a vengeance. That is a LOT of conflict to take-in in 28 pages, but Murphy paces it out well and the trouble begins at a low simmer and builds to a frothing boil by the end.


Allan’s art is grand and it’s great to see him take another swing at Slash. If you go back to the original “Slash trilogy”, that was when Allan first started on the book and hadn’t refined his style, especially for the Turtles, and everyone looks kinda fugly. By this point, though, he’d gotten his look down to a science and Slash is awesome as all Hell, thanks to it. Talbot’s inking doesn’t complement Allan’s style very well, and at a glance I almost mistook the flashback pages he inked for Jim Lawson art. I get the reason for it, so that the flashback would share the same texture as “Megadeath”, but I’d much rather see Allan’s take on the events unmolested than altered to look like Lawson’s.

Page 6 is incredibly grim; the corpses of the Mutanimals littering the beach, with their eyes open in blank stares, smoke rising from their wounds as they soak in puddles of their own blood. Yikes, dude. Apparently, Archie’s editorial refused to let the blood be red and Grossman was forced to make it black. While the logistics of black blood is stupid, I can understand the reasoning behind it; huge puddles of red gore would have just put things over the top for this children’s comic.

Anyway, “Terracide” is a great storyline spawned from a terrible one. Regardless, I felt the tradeoff was worth it. This first chapter alone was a great piece of storytelling with a lot of heart, action and memorable characters, both good and evil.

Grade: A- (as in, “And because you all got so upset with my Furrlough reviews, this one’s for you, furries…”) 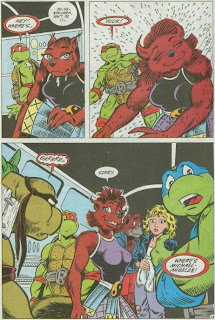