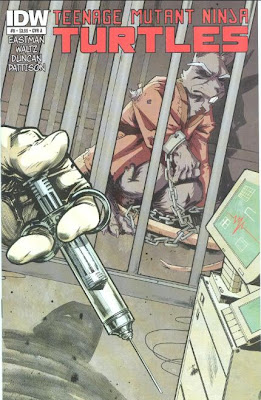 Down in the lair, April does her level best to make sense of the TMNT’s origin as well as the part she played in the whole thing. Unfortunately, the Turtles don’t have time to let her get up to speed at her own pace, as they need to find Splinter and fast. Don inspects the Mouser remote and recognizes it as the same tech he encountered when Baxter Stockman tried to nab him at the Expo. They decide that Stockgen is the best place to go. Mikey wonders about the ninja that Leo fault, but he brushes them off as another matter for another day. The Turtles then turn to April and ask if she can use her inside knowledge as an intern for Stockgen to get them into the high security area. She promises to try. 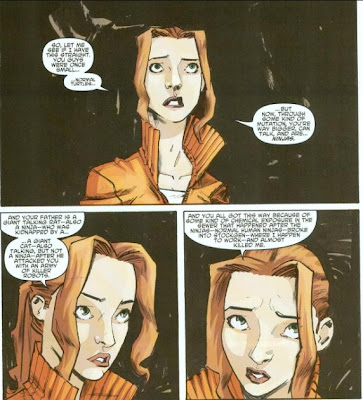 At Stockgen, Hob enjoys toying with the bound and caged Splinter while Chet nervously takes a phone call from Baxter Stockman-himself. Calling from his limo, Stockman tells Chet and Hob not to operate on the specimen until he and his guests arrive. Knowing he’s on thin ice, Stockman assures General Krang (and his two Stone Warriors) that everything is going according to plan.

Outside Stockgen, April leads the Turtles and Casey to the least-guarded entrance. April offers to stand watch while the five of them go inside and rescue Splinter (much to Leo’s disapproval). As for the "getting inside" part, Don has that covered. Repairing a Mouser, Don uses the remote to cause it to break into the security control room and run amok. As the guards flee in terror, the Turtles and Casey sneak in. Taking out some more cameras and guards, the Turtles work their way to the basement where Splinter is being held. However, before they can rescue their father, they must first endure a Boss Battle! A giant laser-spewing Mouser guards the door, but it’s no match for the rage issues of Casey and Raph, who total it in record time. 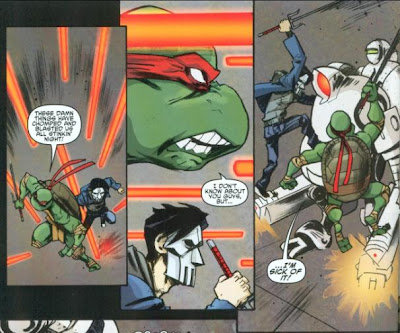 Opening the vaulted door, they find Splinter’s cage smashed, the rat missing and both Chet and Hob knocked out on the floor. As Chet comes to, Leo interrogates him, demanding to know where Splinter is. Chet explains that other ninja broke in and kidnapped him. 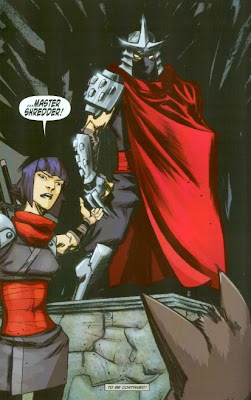 Elsewhere, in some secret chamber, Splinter’s blindfold is removed by the female ninja named Karai. Karai introduces his kidnappers as the Foot Clan and orders Splinter to show respect to her grandfather: Master Shredder.

*This story is continued from TMNT Microseries #4: Leonardo. The story continues in TMNT (IDW) #10.

*Don references the device Stockman used to track him from TMNT Microseries #3: Donatello.

*This issue was originally published with 3 variant covers: Cover A by Duncan and Pattison, Cover B by Eastman and Pattison, and Cover RI by Ethan Nicolle and Noah Maas.

Counting the Microseries and the Infestation II miniseries, it took 15 issues for IDW’s TMNT series to get to the Shredder. That’s like, the antithesis of Mirage’s TMNT. Or something.

But what’s important now is that we’ve finally got the Shredder. And everything is right with the world.

If there’s one constant of the TMNT multiverse, it’s that Splinter gets kidnapped at the beginning of a series. He was kidnapped in the first season of the Fred Wolf cartoon, in the first two issues of the Mirage comic, in the first issue of the Image comic, in the first season of the 4Kids cartoon… That freakin’ geriatric rat just can’t take care of himself! I felt the banter between Splinter and Hob fell a bit short of, well, anything meaningful. Just Hob mocking him and Splinter swearing that his sons will, like, totally be there to rescue him. Aaaaaany minute, now.

I was sort of hoping for a reprise of Splinter’s earlier dialogue with Hob at the beginning of the series, trying to urge Hob away from the darker path he’s following. I mean, why does he hate Splinter? Because he gouged his eye out while protecting his sons? Because he’s a cat and Splinter’s a rat? Hob’s lust for vengeance is as shallow as a kiddy pool and it would be gratifying to see Splinter reach him and lead him away from his path to self-destruction. Or at least try. But really, I just think anything would have been better than, “Gonna cut you up!” “No you’re not! My kids’ll save me!” “Nuh uh!” “Yuh huh!”

Aside from that bit of pissing and moaning on my part, I dug most everything else in this installment. I like this April, I really do. I made a snarky joke earlier about an “antithesis to Mirage”, and while I only half-meant it when I chided the gradual introduction of the Shredder, I actually do mean it when I say that IDW’s April is the exact opposite of Mirage’s. And in the best way.

If you read my reviews of the earliest issues of Mirage’s TMNT, you’ll find that I’m pretty brutal in my evaluation of their April. Honestly, she’s just terrible; a simpering do-nothing that curls up in a fetal position and cries because she’s so useless and oh God how I hate her. I suppose you could say that every version of April outside of the Mirage comic is the antithesis of Mirage-April, as every other version of April has at least been an adventurous, take-charge character to varying degrees. But IDW’s April is a bit different. She’s a cowering victim in all of one issue; her first appearance. Following that, she immediately takes action to better herself and make sure it never happens again. So by this point in the story, she’s not about to sit at home crying while the boys have fun. And her standing watch outside Stockgen has more to do with her having less experience in actual combat than the others, not because she’s some useless girl.

I’m glad that April’s finally been folded in with the main cast of the book, as that means we’ll be getting to see more of her. And I definitely want to see more of this April.

The giant Mouser was neat, but kind of corny, too; like a video game boss. In fact, I was tempted to call it “Mother Mouser”, like the enemies from the TMNT games on the NES, but relented when I saw the sketch design named it “giant Mouser”. Hmph.

Lastly, we have the Foot Clan. Karai popping up was a big surprise, as I hadn’t expected to see her of all characters this early in the narrative. She claims to be the granddaughter of the Shredder, so it looks like her familial relationship with him from the 4Kids series has been imported (she had no relation to the Shredder in the Mirage comics). I’m all for it, as I found 4Kids Karai to actually be more interesting than Mirage Karai, mostly due to her blood-ties with the Shredder conflicting with her sense of ethics and honor. Mirage Karai was great in “City at War”, but after that she hardly ever did anything of interest.

As for the Shredder… Well, he sure looks badass, doesn’t he? We got spoiled on Duncan’s design a while back when the image of issue #10’s cover was released online, but it’s still pretty sweet. We still don’t know for sure if he’s the scar-faced Foot Soldier, but I’m anticipating some sort of twist when it comes to Shredder’s identity. And anyway, if the Shredder is Karai’s grandfather… then who is her father?

As always, I’m chomping at the bit to find this stuff out.

Grade: B- (as in, “But Old Hob should really stop buying his pants at the same joint as Bruce Banner”.)
Posted by TMNT Entity at 10:52 PM