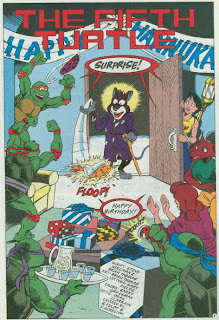 Down in the sewer, Splinter is set to enjoy a quiet night alone with his favorite double anchovy and black olive pizza (as the Turtles and Ninjara have gone to visit April). Stepping into the living room, though, he is shocked: The Turtles, Ninjara, April and Oyuki have thrown him a surprise birthday party! As the night of festivities carries on, Splinter mentions offhandedly that he’s been a mutant rat for so long, he’s almost forgotten how it feels to be human. This intrigues April… 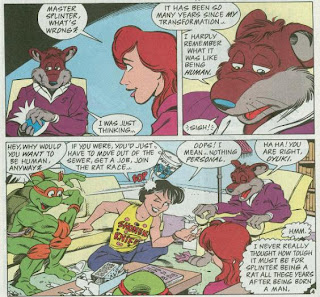 The next day, Oyuki heads out to visit Kato in the hospital while April follows up a lead she recalled about an anti-mutagen being developed by a company called Genterprises. She eventually learns that the company was bought out and changed its name to Mergenterprises. Visiting the corporate headquarters, she’s greeted by a young intern, Perri Grey, who offers to give her a tour. Unfortunately, the head researcher, Dr. Koss, storms in and terminates the tour, kicking April out of the building.

As she leaves, April spots a familiar man: Tim London, one of the Shredder’s ex-henchmen and a known repeat felon. Watching him unload barrels of dangerous mutagen in the guise of a bakery delivery, she decides things are worth looking into. Sneaking in later that night, she bumps into Perri in the hallway. Perri agrees that things are suspicious and the pair investigate together. They listen in on a conversation between a strangely emotionless Koss and an unknown individual, discussing using the mutagen to create their own anti-mutagen but for sinister purposes.

Suddenly, a Grem alien comes around the corner and spots them. The mysterious person Koss was talking to is revealed to me M’Dar, the Number One of the Grem. April and Perri attempt to flee, but they’re captures and brought to the testing lab and thrown in cages. M’Dar has his Number Two (B’Zar) and Number Three (E’Vel) spray their new test subjects with mutagen, transforming April into a mutant snapping turtle and Perri into a mutant flying squirrel. M’Dar determines that the mutagen is ready for use on a Grem soldier and E’Vel volunteers. As the Grem leave to finish their scheme (and prepare to add the mutagen to the chemical components to create an anti-mutagen), April and Perri try to figure a way out. Perri uses her slinky squirrel anatomy to squeeze through the bars while April uses her powerful jaw to cut through them. Heading to the roof, Perri glides them to safety and April leads the way back to her friends for help. 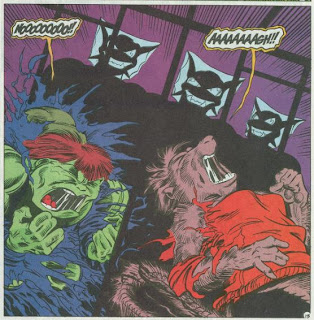 Down in the sewer, the Turtles are shocked at April’s new look. Donning a white bandana (and lending Perri a nightstick), they head back to Mergenterprises along with Splinter to stop the Grem.

With Koss having been taken away to undergo further brainwashing, the Grem finish applying the mutagen to E’vel and await the results. The Turtles, April, Perri and Splinter burst in through the skylight and a battle with the aliens (that can ignite themselves in flames) ensues. E’Vel suddenly storms the scene, having been mutated into a giant, unstoppable monster. As the Turtles and Splinter struggle with E’Vel, April and Perri decide to finish the anti-mutagen. With Perri working the nozzle, April empties the vat with a fire hose straight at E’Vel, returning him to his old Grem self. The Turtles then take down M’Dar and B’Zar, ending the threat. 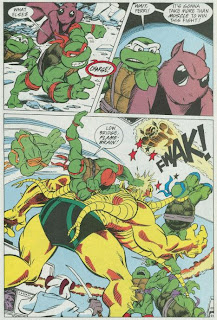 Finding the Grem’s spaceship, Don remembers how their friend, Carol Sagan, reset the controls to send them back where they came from. As the Grem fly back to the furthest reaches of space, the Turtles ask Perri how things are going. Perri says that Koss is getting his mind back, though he’ll take some deprogramming. There’s a bigger problem, however: There’s only enough anti-mutagen left to restore one of them.

The Turtles are happy the way they are (not wanting to be ordinary turtles again), so April asks Splinter if he’d like the anti-mutagen. He declines, saying that he has grown used to being a rat. April is willing to cope with her new reptilian body, but Perri won’t let her make that sacrifice, splashing her with the last of the anti-mutagen. As April returns to normal, Perri says that she thinks she may one day be able to recreate the anti-mutagen and use it on herself. And even if she can’t, she sort of likes being able to glide. Mike, though, thinks that April looked a lot cuter as a turtle.

*Splinter’s birthday was established in this series as being May 11th.

*At the party, you can spot various Easter Eggs such as Renet’s time scepter leaning against a wall as well as a rather ill-planned gift… a cheese shredder.

*While making idle conversation at Splinter’s party, April references the events of The May East Saga as having been nothing more than a nightmare.


*Kato was injured by Johnny Yen in April O’Neil #2. That means he’s been in the hospital for over a year. Yikes.

*The Turtles last fought the Grem in “The Wrath of the Fire God”. They last met Carol Sagan in "The Ghost of 13 Mile Island".

Well, it’s nice to see the TMNT Adventures Special series go out on a high note, as “The Fifth Turtle” is certainly one of their more memorable chapters.

Script-wise, it isn’t particularly hot, as there’s little coping involved for April as she becomes a mutant turtle. She doesn’t really join the TMNT in battle (opting to work a fire hose, instead) and there’s overall very little exploration of her new abilities or circumstances. And she’s restored fairly quickly, too. I understand that with only 28 pages, they had to fit in a set-up, a conflict and a resolution, so a bit of squandering is something of a given. Actually, this might have made a better two or even three-issue arc in the TMNT Adventures ongoing, whereas the idea is rather rushed and wasted as a one-off TMNT Adventures Special story.


And that’s really the only knock I can make against it; that it was a good idea not given enough space to properly develop. The Grem are likewise pretty awesome villains that never got a fair shake (making only two appearances) and Perri’s one of the few characters introduced in these Specials that I’d have enjoyed seeing more of (they gave her her own distinctive outfit and weapon, leading me to believe they wanted to either use her again or get some Playmates action figure mileage out of her). I guess if there’s any problem with the script beyond that, it’s that Ninjara completely disappears without explanation, and the fact that it revolves around Splinter’s birthday makes placing it chronologically very difficult (something an editor should have realized).

Brian Thomas really aces the art in this issue and it’s been great watching his style develop over the course of TMNT Adventures (he’s been at it since almost the very beginning). He is really, really good at conveying motion and chaotic frenzy in his action sequences and there’s just an awesome fluidity to the pages. He’s right up there with Chris Allan, Ken Mitchroney and Michael Gaydos as one of the best artists to work on the series.

Perhaps best of all is that he doesn’t stress the femininity of April’s mutant turtle design. She basically looks just like one of the TMNT but with a sharper beak and a white bandana. No big eyelashes, no hourglass figure, no exaggerated breasts… She’s basically the anti-Venus De Milo in design. And I’m fine with that. Giving a cold-blooded, egg-laying reptile breasts is beyond idiotic.


“The Fifth Turtle” suffers, I suppose, from having a gimmick to its story (“Hey, what if APRIL got turned into a TURTLE!?”), but it’s mostly just guilty of squandering that gimmick. TMNT Adventures Specials were no stranger to their own brand of multi-issue storytelling, so it really would have benefitted from spanning two books instead of being crammed into one. That aside, it’s a fun tale with some wonderful art and action. 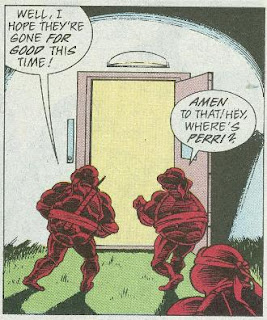