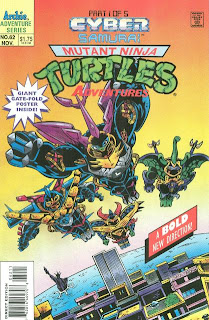 It’s the year 2094. In a high tech lab, Verminator-X succeeds in hacking into the Hubble II space telescope. With it, he spots an approaching alien space craft. This intrigues him. 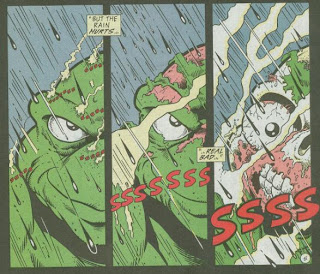 Elsewhere, Raph stands atop the corpses of his enemies (the Shredder, a Foot Soldier, a Malignoid and Armaggon). As he revels in his victory, a sudden downpour of acid rain begins to melt away his flesh. Raph welcomes the pain and celebrates as he is reduced to little more than a skeleton. Raph suddenly wakes in his bed and describes the nightmare to his coyote-woman/girlfriend, Mezcaal. Mezcaal suggests that it’s a message from his subconscious, showing him his inner self.

At Turtleco, Don struggles to remove all the modifications Armaggon made to his timeslip generator. As he begins to disconnect the human brain hooked up to the device (unaware that it belonged to Adolf Hitler), the portal shows him a picture of Nazi Germany toward the end of WWII. Confused, Don shuts off the generator when he gets a call from Leo. 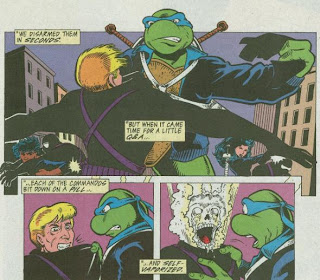 Calling from his dojo, Leo says that something strange is going down. He and four of his students (Nobuko, Miles, Carmen and a mutant baboon named Bob) were on patrol when they caught four robbers stealing some gyroscope parts bound for a space station. Before Leo could question their motive, the robbers each bit down on a pill that vaporized their flesh, committing suicide. Don agrees that the matter bears investigation and offers to pick up Mikey while Leo grabs Raph. 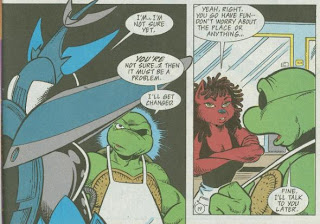 At Gabrielle’s Orphanage, Mikey is taking some time to work on a new piece of art (a sketch of April as an angel). Suddenly, Don arrives at the window wearing a set of cyber samurai armor. He asks Mike if he’d like to help investigate some possible terrorist activity and Mike gleefully suits up.

At the Turtle Island club, Mezcaal is busy throwing some hoodlums out of the joint. Leo shows up in his own set of armor and asks Raph to come join their brothers on patrol. Much to Mezcaal’s irritation (as she has to stay behind and run the joint on her own), Raph suits up and leaves to join the party.

“April O’Neil: The Angel of Times Square, Chapter I”


It’s the year 1999 and New Years is just around the corner. In Times Square, a hustler named Hollywood Hoey is busy marketing his latest attraction: A real live angel. Just $100 to see her on stage. Oyuki is on the scene (now a full-blown news reporter) and asks Hoey point blank why an angel would appear on stage and why they would let him charge admission. Hoey simply shrugs the questions off, stating that the Angel wants to share her message before the millennium and perhaps help Hoey out along the way. 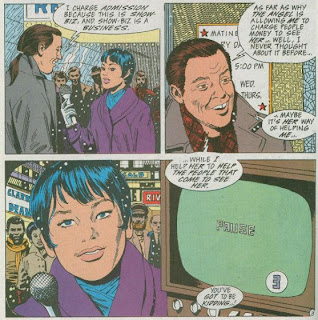 Later, Oyuki shows her report to April, who is incredulous to the whole thing, knowing full well that Hoey is a notorious conman. Oyuki agrees that the man is sleaze, but can’t argue with the results. She then shows April a tape of his satisfied customers leaving the theater, praising God and announcing that Hoey has performed a miracle. As April stares slack-jawed in shock, Hoey scoops up piles of cash before the camera.

*The Cyber Samurai armor has had several conflicting origins across the various TMNT mediums. It appeared in the Fred Wolf cartoon in the episode “Cyber-Turtles” and in the comic CBS Action Zone #1.

*This issue also included a bonus gatefold pin-up of the Cyber Samurai Turtles by Chris Allan, a pin-up of Ninjara vs. the Shredder by Matt Roach, and a bonus April O’Neil back-up story, “The Angel of Times Square” by Dean Clarrain and Gray Morrow.

In the “Hype” column at the end of this issue, Murphy (Clarrain) explains that the more mature quality of the “Dreamland” arc had to do with the fact that it stars, well, more mature Turtles. Older, that is. And Murphy certainly doesn’t waste any time making that apparent in the story-itself, as we begin with Raph covered in the blood of his slaughtered enemies before melting away into a skeleton. Then that’s followed up with him waking up in bed with his new girlfriend, Mezcaal, and you can probably guess what they were up to in there. And then there’s the whole Nazi Germany thing and the robbers committing a rather graphic form of suicide (I guess cyanide capsules just don’t have the visual oomph that vaporizing capsules offer).

At a glance, you’d never guess that this was solicited towards elementary schoolers.

It’s nice to get a Future-Turtles story that’s strictly the Future-Turtles. We don’t have to split any page time with the present day incarnations and their multitude of conflicts; we can take time to really focus on this future world and where our cast ultimately winds up a hundred years from now (er, 1994). My favorite aspect of the whole issue wasn’t any of the “gritty, mature, violent” stuff (as cool as it looked, thanks to Allan), but simply seeing what each Turtle does for a living now that they’re all grown up.

Their various occupations all seem perfectly suitable and a natural place for them to go now that they’re no longer carefree teenagers, but regular 9 to 5 working Joes. Well, kind of regular. In Raph’s case, apparently once you go canine, you never go back. Though I’m sort of left with this sensation that Mezcaal is sort of the Madeline Pryor to Raph’s Scott Summers. In the X-Men comics, after Jean Grey died the first time, Scott hooked up with Madeline because, “Hey, you look just like my dead girlfriend. Let’s get married!” I have to wonder if that’s a part of Raph’s motivation for dating Mezcaal (who has to be at least fifty years his junior, considering he’s over 100 at this point). “Hey, you look just like my dead girlfriend but with dreadlocks! Let’s open a club together!”

Mike painstakingly working on a memorial for April was rather heartfelt. Along with Image’s TMNT (Vol. 3), this storyline was one of the only ones to run with Mikey’s love of the arts, be it writing or drawing (something Mirage chose to willfully ignore). April has to have been dead for quite some while, but the fact that Mike is constantly erasing and starting over shows that he wants her memorial to be perfect.

The various fates of the Turtles in Archie’s future actually offer a great mirror to their fates in Mirage’s future. There’s something of a “cracked looking glass” between them, as the various fates in the Mirage universe are “similar but more depressing”. That’s not surprising.

As for the Cyber Samurai armor? Pure product placement, but Murphy at least admits to it in the “Hype” column at the end. I’ve always sort of liked the Playmates shilling in TMNT Adventures (I read a lot of Marvel’s Transformers and G.I. Joe books, back in the day), so I can’t say it bugs me. Mike’s helmet kinda makes his head look like a cow’s, though.

The back-up strip sticks to the theme of this main story, but following April’s future. Since her lifespan is far shorter than the Turtles, it can’t run parallel to the “Dreamland” storyline. Still, it’s great to know how she and Oyuki make out in the far flung future of 1999, particularly Oyuki becoming a seasoned reporter of her own merit. I always sort of worried about Oyuki in the comic, that she would inevitably regress back to being a punk or a slacker, so it’s comforting to know things worked out for her in the end.

The story-itself touches upon subject matter you wouldn’t expect to see in a supposed kid’s book (nothing new to TMNT Adventures, as I mentioned a few paragraphs ago). For a book that got in a lot of trouble a couple years before due to its religious subject matter, I’m surprised they had the guts to run this storyline. Gray Morrow’s art, on the other hand, looks better suited to something like “Mary Worth” and seems too weirdly “soap opera” for this comic.

Grade: B+ (as in, “But an advertisement in this issue reminded me how much I truly miss Garfield Ravioli”.)