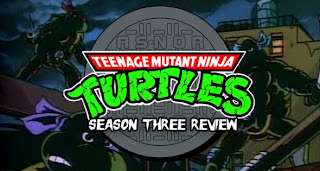 Got on another TMNT animated series kick, so I took a look back at the first 6 episodes of season 3 of the Fred Wolf cartoon for Adventures in Poor Taste.

I'd been dreading getting into season 3 for a while, as I remember it being a lot of bad scripts and a lot of bad animation and just a LOT of episodes in general.  To my surprise, at least in regards to this first batch of half dozen episodes, it wasn't so bad.  Of course, we haven't gotten to the worst of the season yet; not by a long shot.

And I'll never understand why the animation for "Turtles on Trial" was so damn good.  But hey, considering how ugly some of the later episodes in this season are going to get, I guess I'll just enjoy it while it lasts.