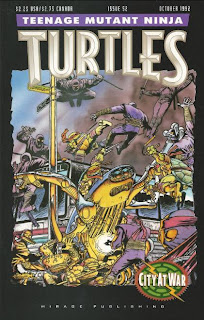 At a bus stop in New York, a businessman waits with a briefcase. 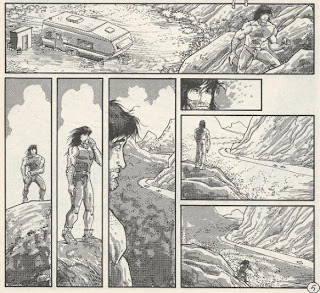 In Colorado, Casey wakes up in Gabrielle’s trailer.  She offers him breakfast, but his busted jaw isn’t feeling up to it.  She says she has to head to work, but Casey’s welcomed to hang around until he gets his stolen car squared with the police.  As Gabrielle leaves, Casey calls the police to report his missing vehicle, but quickly hangs up.  Grabbing a beer, he takes a look at the scenery around the lonesome trailer and goes for a walk.

In LA, April reads an edition of the New York Times covering the recent slaughter of a cult gang called “the Feet” resulting in a massive underworld turf war.  April suddenly flashes back to the time when the Foot burned down the Second Time Around shop and she and the Turtles barely survived.  Robyn snaps her out of it and suggests they go shopping and get their hair done.

Back in Colorado, Gabrielle returns to her trailer for lunch and finds that not only has Casey cleaned the place up, but he’s prepared lunch. 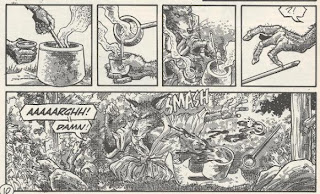 In the woods of Northampton, Splinter sits and prepares a cup of tea.  He loses focus and spills the ladle.  Enraged, he slaps the pot aside and curses to himself.

Meanwhile, Casey and Gabrielle have finished their lunch.  Gabrielle invites Casey to stay as long as he wants and the two kiss.

On a bus in New York, the businessman opens his briefcase which contains a portable computer with satellite internet link-up.  He hacks into the Con Ed system and changes the billing history of a nearby building to seven months past due.  At the Con Ed facility, they notice the flag on their system and cut the building’s power.  Inside the building, several Foot Soldiers are busy preparing some high tech equipment.

In Tokyo, Japan, the Japanese branch of the Foot have gathered in a conference room to discuss reports from the New York branch.  Apparently the New York Foot have broken apart into factions and are currently waging a war that is compromising the organization’s secrecy.  One of the higher-ups believes it to be folly to delay acting any longer, but a mysterious woman tells the group that in chaos there is weakness and it may be to their advantage to wait.

Back in New York, the Turtles take down some muggers.  Raph whines that they aren’t making any progress on their search for the Foot and that cleaning up hoods isn’t their job (meanwhile, the old man in the hospital is helped out of his bed by a nurse).  Leo reminds him that they need to be patient and wait for an opportunity to present itself. 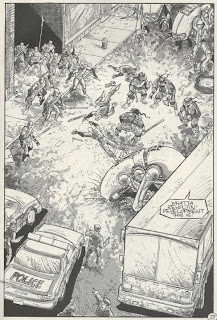 Suddenly, a van filled with Foot Soldiers drives by and drops off a huge bipedal robot with claws.  The robot attacks the bus carrying the businessman that shut off the Foot’s power.  Several other Foot Soldiers spill into the streets to attack the robot and all Hell breaks loose.  The Turtles join the fray and Raph eventually brings the robot down.  Just then, not only do the cops and more Foot Soldiers arrive, but so do two more robots.  Mike ponders if things could get any worse.

From a rooftop, a Foot Elite Guard watches the chaos.

*April flashes back to the destruction of the Second Time Around shop seen in TMNT (Vol. 1) #10.

*Back story on the mysterious woman from the Japanese branch of the Foot (Karai) can be seen in Tales of the TMNT (Vol. 2) #44.

*CHET ALERT: Robyn suggests she and April go to a sale at “Mr. Chet’s”.  When the Turtles confront the robot, a store named “Chet’s” can be seen in the background.  The name “Chet” was an Easter Egg snuck into several TMNT stories by the Mirage crew because… they just liked the name!

*According to the letters page, the Turtles are 16 years old at this point in the storyline.  That… doesn’t really gel with the timeline so far, though.  But really, whose keeping track?

That Gabe chick sure is easy, isn’t she?  Not that I dislike her or anything, but she’s almost dangerously quick to let a complete stranger move in with her.  Regardless, it’s actually an important moment for Casey, as this is when he chooses to let go of his Chevy, the material possession he’s been shown to prize over just about everything else in the world.  He says good bye to a childish infatuation and starts thinking about finding something of real value.

Sadly, most of the issues of TMNT Vol. 1 that illustrate Casey’s obsession with his Chevy were guest issues and are thus “non canon”, so the symbolism might be lost on readers who haven’t seen those less-reprinted and harder to find stories.

Anyway, one of the things you’ll notice about “City at War” is that it feels very “cinematic”.  There are establishing shots, long sequences without dialogue that set a tone or tell a story entirely through visuals and lots of rapid cuts back and forth between the characters and their arcs.  It’s one of the stronger aspects of “City at War”, as the decompressed pacing and the visual storytelling structure really lay on the atmosphere and heighten the tension of the sequences.

Lawson would try this approach in other stories of his, most notably “The Brain Thief”, and it wouldn’t quite work out as well.  I think the reason he can get away with it in “City at War” is because this arc is a whopping 13 issues long, with each installment running between 25 and 30 pages (sometimes more than that).  He has a LOT of room to work with and sparse out the drama and the action.  The approach doesn’t work quite as well in a 4-issue miniseries.

Splinter’s arc is finally worth talking about, as we can at last see that the breaking up of the family is beginning to get to him.  Looking strictly at the Volume 1 series (and not in issues of Tales that slot in-between them), Splinter’s been sort of an enigma.  He was an ever present source of wisdom and guidance during the early issues set in New York, but once the action moved to Northampton, he pretty much drifted off into the background (Guest Era issues aside).  We don’t see how being exiled from New York affected him in TMNT (Vol. 1) #11 and the Turtles return to New York to defeat the Shredder without consulting him at all in TMNT (Vol. 1) #19.  In a way, it’s as though he’s become obsolete in the lives of his children/pupils, who are now making major life decisions without running them past his scrutiny.  Splinter being rendered superfluous to the plot is slowly being addressed, as he’s now the one left directionless and has to cope with uncertainty.

As for the Turtles, I was amused by Raph’s statement that fighting street crime isn’t their responsibility; that the only thing that matters to the Turtles is taking down the Foot.  It’s a great spotlight on what differentiates the Mirage TMNT from their cartoon and more mainstream counterparts.  The original Mirage TMNT weren’t created to be superheroes.  They don’t go on patrol like Batman and fight crime.  Sure, they’ll get involved if they’re in close proximity to danger because they have functioning moral compasses, but they aren’t “guardians” of truth and justice.  They’re ninja.  They’re assassins.  And they’re at war with a rival ninja clan.  Any other adventures they partake in are either out of accident or boredom.

Obviously, that doesn’t paint them in a very marketable light and, yeah, I don’t think we’ve ever seen the Mirage Turtles walk away from helping someone in mortal danger.  But Raph’s dialogue still underscores one of the fundamental differences between the Mirage TMNT and the, well, more marketable cartoon and kid-comic incarnations.  They’re a warring ninja clan first and “superheroes” second.  If at all.

Grade: B+ (as in, “But messing with each other’s electric bills?  Now the Foot Clan factions are just getting petty”.)
Posted by TMNT Entity at 2:06 PM