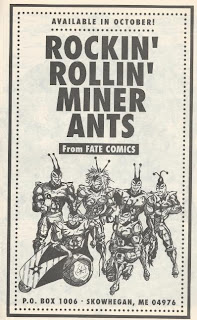 Using a picnic and some pizza, the villain Scorn sets a trap for his arch foes, the Rockin’ Rollin’ Miner Ants, as well as the Teenage Mutant Ninja Turtles.  The two teams take the bait and as soon as they’re in range a trap door opens, plummeting all ten of them into a pit. 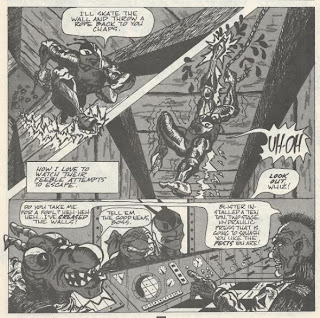 The Ant named Whiz attempts to use his super speed to race up the side of the pit, but Scorn has greased the walls and he tumbles back down.  Scorn then activates hydraulic presses to crush the do-gooders.  The Ant named Figure uses his superior intellect to realize that ants can lift fifty times their body weight and tells his teammates to hold the walls at bay.

As the Ant named TNT holds the walls by himself, the Turtles and the Ants escape the pit (then lift TNT out a moment before he’s squished).  Undeterred, Scorn unleashes the beetle mutant Blister to destroy the Turtles and the Ants.  The two teams handily defeat Blister and Scorn escapes in his rocket ship.  The Ants then hurl the defeated Blister after the rocket and I think it might have exploded or something?  I can’t tell.  This art’s really bad.

Anyway, the Turtles and the Ants promise to get together again sometime.

Jeez, what can I say about this thing?

Just that it's extremely amateurish.  The art is something a middle schooler would draw and the story is something an elementary schooler would write.  It’s not a matter of “stylistic choice”, either.  The characters can’t stay on model between panels, the perspective is always off, the layouts are simplistic and the balloon-like musculature and lack of stable composition just really, REALLY makes this thing look like it was drawn by children.  And that story… C’mon, just read it.  That’s the kind of TMNT comic you probably doodled on notebook paper when you were 8.

But the reality is that the creators of this comic weren’t children.  And the Rockin’ Rollin’ Miner Ants even got a 4-issue miniseries.  Go figure.