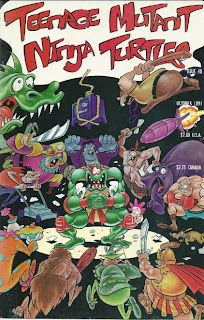 As Eastman and Laird introduce the story, Bessy and the bull she fell in love with last issue share a romantic evening together. 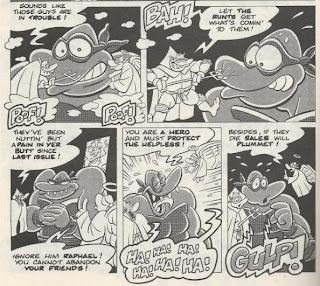 Back in Simpletown, the pickup carrying Raph, Jethro and the two aliens crashes through the barricade and scatters the townspeople.  Raph and Jethro are ejected through the windshield and into the safety of a nearby comic shop, while the aliens start firing their lasers at everyone in hopes of world domination.  Their rayguns break, though, and they’re attacked by the townspeople.  Raph has a crisis of conscience, wondering if the aliens are worth saving considering all the trouble they’ve caused.  However, he realizes that sales will plummet if they die (yeah right) and decides to save them.  Raph bores all the townspeople to sleep with a dissertation on man’s capacity for good vs. man’s capacity for violence, then grabs the aliens and hightails it out of town in the pickup.

They find the US Government airlifting the flying saucer away and covertly follow.  They’re eventually led to a top secret base and sneak in.  Meanwhile, Colonel Bullmoose welcomes President Bush to the base and shows him to where the “aliens” (the Old McDonalds and their dog) are being held.  The sinister Professor Eggbert is tormenting the old timers in the guise of an interrogation.  Raph and the real aliens watch from the air vents, but the squeak of a rat scares them all out into the room with the military.  Colonel Bullmoose shows his true colors, begging the “alien crocodile” Raph to eat the President first.  Professor Eggbert, in turn, bumps into his own torture machine and is electrocuted. 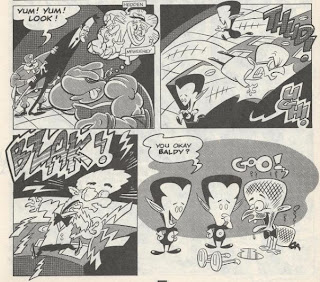 President Bush surrenders and promises to give the aliens fuel for their flying saucer.  While he cannot surrender the Earth to the aliens, he does give them to the deed to Idaho.  Satisfied with Idaho, the aliens pile into the flying saucer with Raph and zoom off.

Finally realizing he doesn’t know their names, Raph asks the aliens what they’re called.  They say that they’re “Nim” and “Rod”.  With the sun rising and the adventure over, Raph tells Nim and Rod to say hi to all their friends at the frat for him.  Nim and Rod reveal that they’re the only two members of the frat and the whole adventure was pointless.  Before Raph can strangle them, Nim and Rod beam him back down to his bedroom in the Northampton farmhouse.

Exhausted, Raph attempts to get some long overdue shuteye.  Splinter barges in and whacks him on the head with his staff, telling Raph it’s his turn to milk Bessy this morning.  Raph suddenly realizes he forgot all about Bessy. 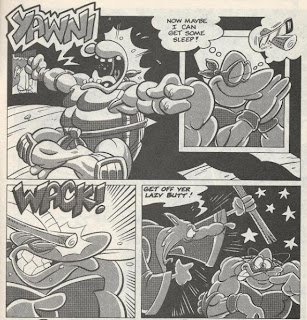 At the McDonald farm back in Simpletown, Bessy and the bull watch the sunrise and smoke some cigarettes, having finished what I can only presume was a night of satisfying bovine intercourse.  Nim and Rod weep for such a happy ending.  Fans weep for the $8.25 they wasted on these three issues.

*This story is continued from TMNT (Vol. 1) #39.  The Hedden/McWeeney incarnation of the Turtles would make one more appearance in TMNT Special: The Maltese Turtle.

*Having been published during the TMNT (Vol. 1) “guest era”, this issue is not a part of the Mirage TMNT continuity “proper”.

If my “reviews” for the last two installments in this trilogy haven't tipped you off, I am NOT a fan of “Spaced Out”.  Really, though, I just didn’t think each of these issues deserved an individual review as I’d only be repeating the same things over and over again, so it’s better to get it all done in one.

Look, I liked TMNT #34.  It was an enjoyable oneshot story.  But whatever happened to Hedden & McWeeney between TMNT #34 and the “Spaced Out” arc, it was definitely a change for the worse.  Their style is now unabashedly silly and surreal and their ideal mode of storytelling is the crutch of all lesser indie comics creators: “Stream-of-consciousness ran-dumb bullshit”.  “Spaced Out” is nothing but a string of goofy, unfunny jokes discharged in rapidfire succession with no point or direction.  It’s just one insipid gag after another until they’ve filled three issues.

I mean, there are a handful of amusing visual gags in this arc.  No knee-slappers, to be sure, but a couple panels that made me smirk.  Unfortunately, all the “A material” is spread out between agonizing stretches of corny gags and inane running jokes, none of which are even remotely clever, much less legitimately funny.  If Hedden & McWeeney had shrunk the storyline down into a single oneshot issue, “Spaced Out” might not have been so bad.  Even if a reader didn’t find the “A material” amusing, it would have only been one issue and that’s pretty harmless, all things considered.  But no.  They decompressed this shit out to three meandering, miserable issues and it just doesn’t feel like it’s ever going to stop.

A part of me feels guilty about ragging on Hedden & McWeeney like this, not just because I enjoyed their first TMNT guest story, but because the pair are sincerely GOOD cartoonists.  It’s not just the zany and unique style they employ, but all the fundamentals of good cartooning can be found in their art; from the layouts to the sensation of motion to the use of perspective.  These guys KNOW what they’re doing and they’re GOOD at it.

At any rate, while I'm not it's biggest fan, I certainly prefer this weird, surreal style to Tom McWeeney’s current artwork.  He’s adopted a woefully generic “manga” look and it just reeks of insincerity and pandering to contemporary trends.  Observe: 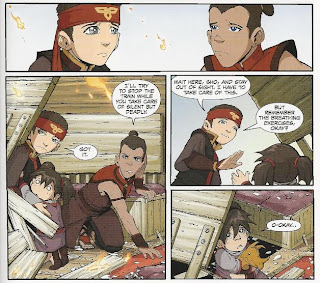 So as you can see, my problem really isn’t with the artwork or even the silliness.  That’s all well and good.  My problem with “Spaced Out” is that instead of getting one potentially humorous issue, we got three painfully unfunny issues that drag and drag and drag.  There’s nothing more uncomfortable than watching a joke absolutely fucking DIE, but the comedians don’t realize it and just stretch it out for what feels like an eternity.  I can only imagine what it must have been like for TMNT readers back in ’91, having to suffer through four months of THIS (to add insult to injury, Hedden & McWeeney ran late and August had to be skipped without a book).

I regard “Spaced Out” as the ultimate low of the Mirage TMNT comic book history.  And to this day, whenever I think of the Vol. 1 “guest era”, I think of THIS comic.  And it gives me unpleasant chills.

Grade: Triple F (“For all three issues, since I didn’t grade the last two until now”.)