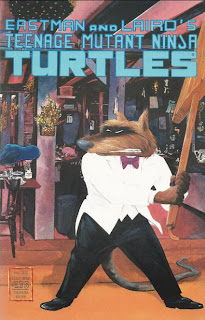 After a lengthy recap of the previous two installments, we catch up with Dale in the utopian future of 1995.  Dale is peeved that she was tricked and the world is going to be invaded by the Skwal soon, so she marches into the forest to think.  She’s approached by the Fannywhacker, a vigilante (and anthropomorphic rat) who targets truants because hooky is the only crime left in the world.  Dale reminds him that it’s Sunday and Fannywhacker laments that all he wants is to live in a world polluted by crime and violence so he’ll have something to do.  Realizing that Fannywhacker is on her side, Dale puts him into her time machine and sends him back into history to undo her mistake. 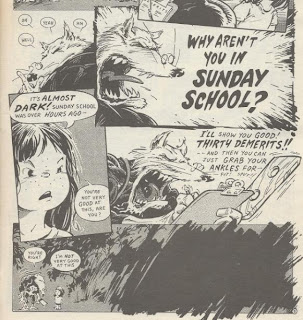 In 1988, April feeds her four new pet turtles.  The turtles aren’t fond of being kept in a terrarium, but haven’t the strength to escape, so they make the best of the situation.

Having successfully repaired the time stream, Fannywhacker is restored to his original identity: Millionaire Boo Swain, alias Gnatrat.  Unfortunately, the time machine blinks out of existence before completing its journey back to 1995.

In 1988, the Turtles are restored to being teenage mutants and bust out of their terrarium in April’s apartment. 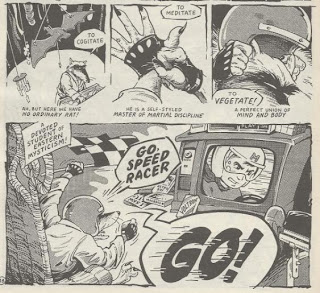 Elsewhere, Splinter fortifies himself in his secret chamber to watch anime.  He’s interrupted by Gnatrat, who was left stranded in 1988 when the time machine disappeared.  Gnatrat asks Splinter for help and Splinter suggests they manipulate the morbidly obese superhero Supperman.  They’ll feed him until he goes into a state of suspended animation, then Gnatrat will perform a Vulcan mind-meld with him until he wakes up in 1995.

Using a million dollars he had in his pocket, Gnatrat buys a restaurant (employing Splinter as a waiter) and lures Supperman in with an All You Can Eat promotion.  They proceed to feed the glutton, eventually coming one meal short of putting Supperman into a food coma.  They prepare the final dish, which is unfortunately pizza, and it attracts the Ninja Turtles to the restaurant.  Splinter begins to tell his sons to back off from the pie, but Gnatrat gets too absorbed in his “boss” role and starts ordering Splinter around.  Incensed, Splinter feeds the pizza to the Turtles just to tick Gnatrat off.  Gnatrat attacks Splinter, but Splinter bats him away with a pizza oven paddle.  Gnatrat crashes into Supperman, who in return hits Gnatrat with a burp so powerful it launches him forward in time.  Gnatrat arrives in 1995 and lands in the bedroom of obese hippo-woman, Lasagna Lagna. 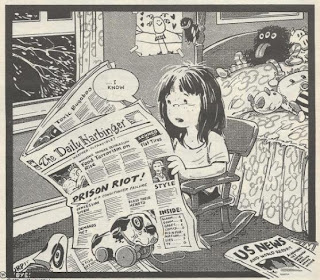 Elsewhere in 1995, Dale confronts George of the Skwal.  George tells Dale that she’s made a grievous error in defeating the aliens by restoring the timeline, but Dale simply shoos him back into his spaceship.  Dale returns home, where she receives a stern lecture from her mother for talking to strangers, as strangers are dangerous, and for staying out late, as it’s dangerous to be out after dark.  Dale looks at a newspaper and reads all the violent headlines and sighs.

*The hippo-woman, Lasagna Lagna, will appear again in the short strip, “Lasagna Loves”.

*Gnatrat is a character created and owned by Mark Martin.  According to an editor’s note, from Gnatrat’s continuity, this story takes place between “The Dark Gnat Returns” and “Happy Birthday Gnatrat”.

*As a guest issue, this issue is non-canon to the proper Mirage TMNT series.

*This issue contained two bonus pin-ups by Mark Martin made to look like faux school reports by Dale, and the original piece of art that inspired “The Fannywacker” by Dragan Flaesc.

*This issue and the previous issue can be seen sitting by a toilet in Ghoulies III: Ghoulies go to College.  Truly an honor.

Ugh.  This was just awful.

It’s a real pain to read Mark Martin’s “Time and Time Again” trilogy, as the story just deteriorates so rapidly after the first installment.  In this concluding chapter, Martin goes completely off the wall and falls back on that old standby of the uninspired ‘80s indie comic creator: Stream-of-consciousness nonsense.  Because being “random” is the same as being clever, right?

The overarching storyline comes to a screeching halt after the first 6 or so pages (two of which are recaps) and the entire thing devolves into a promotion for Martin’s creator-owned character Gnatrat.  If you’re a Gnatrat fan then I’m sure you’ll get a lot more out of this issue than I did.  However, if you’re like me and you’re response to seeing Gnatrat in this issue is, “Who the fuck is Gnatrat?” then prepare to be annoyed.

Dale, who was the star of the first two chapters, is completely removed from the story once Fannywhacker/Gnatrat makes his gratuitous crossover appearance and she won’t appear again until the epilogue (which tries to be bittersweet and thoughtful, but it’s way too late by that point).  The actual conflict set up in the last chapter is resolved midway through the issue and the remainder is just Gnatrat acting cuh-raaaaaaaaayzee!  Lots of stupid, random bullshit used as a substitute for humor and creativity and it’s all very boring.  It’s just Gnatrat spouting gibberish (“Ha Ha Ha spanking.  Ha ha ha Supperman.  Ha ha ha Vulcan mind-meld”) and reminding everyone that he’s in a comic that you can buy right now.

And as with the last two installments, there is still absolutely no reason this needed to be a Teenage Mutant Ninja Turtles comic.  The Turtles spend the issue sidelined in a terrarium and the only thing of consequence they do is eat a pizza at the end (though the plot impact of the pizza would have had the same consequence if it had just been dropped on the floor).  Splinter enters the actual storyline, but he doesn’t act a thing like Splinter and could have just as easily been substituted with an original character.  Across all three installments, none of the Turtles acted with an individual personality, because why bother?  All this entire “Time and Time Again” arc amounted to was an opportunity for Mark Martin to advertise Gnatrat to a larger audience, not actually write a Ninja Turtles story.

And yet, Mark Martin’s skill as a cartoonist gives even this insipid sequel a silver lining.  He employs his usual variety of art styles and makes even recap and expository pages “neat” to look at.  In the end, though, my favorite pages in this issue were the two faux school reports done by Dale.  They were very cute and actually felt like the sincere work of an 8 year-old and not an adult pretending to be an 8 year-old.  On that note, I was really starting to like Dale, so seeing her removed from the plot so mother fucking Gnatrat could mug the camera really pissed me off.

This was an awful story and it sure as hell didn’t make me want to read any Gnatrat comics.  Martin uses the TMNT brand as a tool for advertising himself and his work, but half-asses actually writing the TMNT.  His scheme is transparent, which makes it all the more irritating.  What began as a really clever one-shot adventure soon bloated into a tedious trilogy, eventually ending on a bunch of stream-of-consciousness bullshit, strung together in the hopes that being “random” might mask the fact that none of it is “funny”.  Or clever.

If you want a great story, read TMNT #16.  Then just do as I do and pretend that Martin never made any sequels.

Grade: D- (as in, “Dude, stop calling him ‘Leon’.  That is not Leonardo’s nickname and it never will be”.)
Oh, and on the offchance you didn't believe me in the Turtle Tips when I said that this issue and last issue made an appearance in Ghoulies III: Ghoulies go to College... 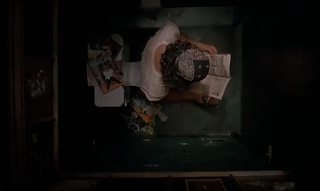 I NEVER lie about Ghoulies.