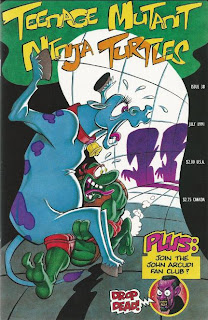 At a top secret space observation station in New Mexico, an employee (Mitchell) notices a meteor careening toward Earth.  He alerts his boss (Mr. Holms), but it turns out to be nothing but mayo on the radar screen.  Everyone relaxes until another blip shows up on the screen.  This time, it’s an alien spacecraft.  Panicking, Mr. Holms calls President Bush while all the other employees start drinking and frolicking and preparing for the end times.   President Bush asks where the flying saucer is headed and Mr. Holms tells him “Nothampton”. 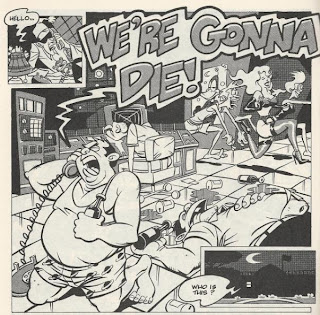 At the farm in Northampton, Raph is up late eating pizza and watching an Ernest Borgnine marathon.  The combination gives him indigestion, so remembering antacid advice from Splinter, he decides to get some warm milk.  The carton’s empty, though, so he heads out back to milk some from Bessy herself.  The flying saucer zooms over the farm and the two aliens mistake Raph and Bessy for a pair of typical Earthlings undergoing a mating ritual.  The aliens beam Raph and Bessy onboard their saucer and zip away.  Meanwhile, the other three Ninja Turtles are none the wiser, as they’re all sleeping peacefully and enjoying a raunchy dream about a female reptile.

Mr. Holms finds himself relieved of command at the observation station, replaced by Colonel Buford Bullmoose, who wants to destroy the aliens. 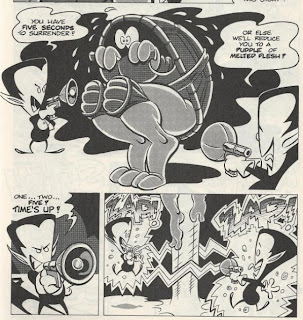 Speaking of which, the two miniscule aliens have Raph and Bessy strapped to a table and intend to wipe their brains.  They have trouble operating the machinery, though, and accidentally set Raph free.  Raph is about to clobber them when the aliens begin weeping.  Raph takes pitty on them.

Back on the farm, everyone’s still sleeping.  And back at the observation station, Colonel Bullmoose rallies the fighter jets to attack the flying saucer.  Mr. Holms, though, thinks Bullmoose might be overeacting and blowing Earth’s chance at making contact with a higher intelligence. 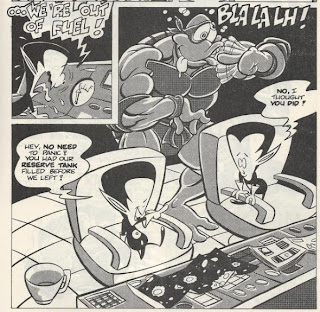 Inside said flying saucer, Raph is lounging around in a Jacuzzi with the two aliens.  They say they’re from the planet Mirage and that they have to conquer Earth in order to join a college fraternity.  Raph asks them how much time they have and the aliens say one Earth night.  Suddenly, the fighter jets attack and the two diminutive aliens are woefully ill-prepared to fight back.  They manage to find the gas pedal and outrun the fighter jets, but doing so uses up all their fuel reserves.  As Raph does cartoonish wild takes, the flying saucer plummets toward Earth.

*Having been published during the TMNT Vol. 1 “guest era”, this issue is not a part of the Mirage TMNT continuity “proper”.

*The farm in Northampton is described as “The O’Neil Farm”.  While it was the property of the O’Neil family in the first live action TMNT film, in the Mirage comics, the farm belongs to the Jones family.  Then again, they also misspell “Northampton” as “North Hampton” and “O’Neil” as “O’Niel” in the same sentence, so competency wasn’t really Hedden & McWeeney’s strong suit.