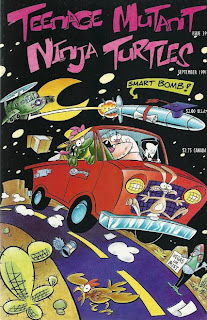 At a farm 10 miles outside of Simpletown, the Old McDonalds are watching a game of nude volleyball on TV when the flying saucer crashes into one of their fields.  Raph, Bessy and the aliens come stumbling out of the ship.  While Bessy hooks up with a nearby bull and Raph attempts to get his bearings, the aliens begin their invasion of Earth, one scarecrow at a time. 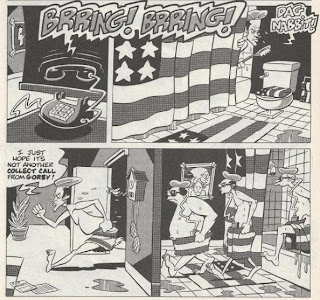 At the White House, President Bush gets a call from Colonel Bullmoose that the flying saucer has been tracked to a farm outside of Simpletown and that he’s moving in with all his forces.

Meanwhile, Raph figures that they can get some fuel for the saucer in town, though they’ll need a ride.  Raph steals some clothes off Mrs. McDonald’s laundry line and she reports the “alien” theft to the Sheriff of Simpletown.  The Sheriff panics and calls a town meeting, urging all the residents to prepare for an alien invasion.

Back at the farm in Northampton, Splinter’s rest keeps getting disturbed by the other three Ninja Turtles and their raunchy dream of a female reptile giving a striptease.  Splinter sends his astral projection to invade the dream of the TMNT, telling them to remember their ninja training and think celibate thoughts.  Splinter then pulls the female reptile into his dream for some kinky fun. 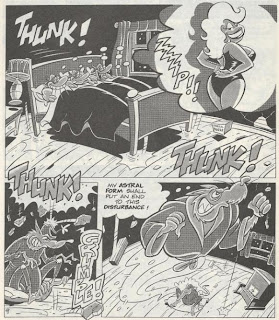 Raph, now dragged up in the clothes he pulled off the laundry line, flags down a pickup truck by showing his ankle.  He gets a ride from the gruesome Jethro Hogbreath, while the two aliens sneak into the truck bed.

Back at the Old McDonald farm, the elderly couple and their dog creep into the flying saucer to investigate.

Meanwhile, back at the ranch, this joke is stupid and nobody under 50 would even get it.

Back in the pickup truck, Jethro tries to get fresh with Raph, so Raph socks him in the face.  This causes the truck to go racing out of control.

Meanwhile, back in the stone age, ha ha ha what a clever running gag.

Back at the flying saucer, the Old McDonalds come trudging out in disappointment, having found no aliens.  Colonel Bullmoose and the army awaits them, though, mistaking the old timers and their dog for the aliens.

Meanwhile, back at Mirage Studios, Eastman and Laird fight over who had the stupid idea of hiring Hedden and McWeeney.

And back in Simpletown, the Sheriff and the locals have barricaded the main road from the highway.  They see Jethro’s truck speeding toward them and open fire (not because it’s full of aliens, but because none of them like Jethro).  Raph and Jethro, meanwhile, flip out as the two aliens (one working the wheel and the other working the pedals) gun it straight toward the barricade and all the townspeople.

*Having been published during the TMNT (Vol. 1) “guest era”, this issue is not part of the Mirage TMNT continuity “proper”.

It’s still not over.