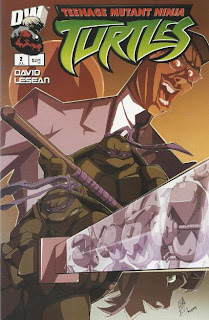 At the old O’Neil homestead, Li’l April is practicing to be a news reporter by interviewing her mom.  She asks what’s for dinner and Mrs. O’Neil says turtle soup.  Suddenly, the Ninja Turtles come bursting out of the pot as Mousers come crashing through the windows.  As the Turtles fight the Mousers, Li’l April wants to get a better look. 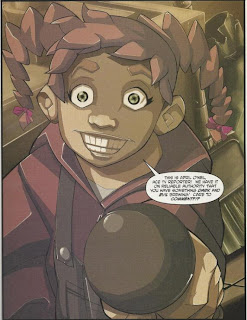 Now it’s the present (maybe) and Baxter Stockman is rehearsing the announcement of his new Mousers with his lab assistant, an adult April.  April is distant, feeling like only moments ago she was a little girl.  Baxter is not amused and wants to get the rehearsal right.

April is now in her Dad’s VW Beetle (with the oh-so subtle license plate “BMBLB”).  Mr. O’Neil refuses to let her attend journalism college, saying that her scores in science are too high to be wasted on the wrong major.  April reminds him that she’s already attending college and that she changed her major to science a while ago.  A manhole in front of them explodes and out pop the Turtles, still fighting the Mousers.

Back at the lab, April and Stockman record their demonstration of the Mousers.  As Baxter gives his speech, April sees Li’l April sitting in the corner playing with Ninja Turtles dolls.  The Raph doll warns April that her boss is evil.  April is incredulous, but the Raph doll reminds her of what just happened to her not a few minutes ago. 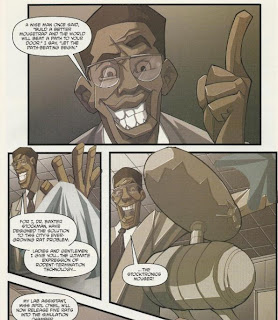 Now it’s the future (maybe) and April is running diagnostics on the Mousers.  She finds a transmission anomaly and wants to go over it, but Baxter tells her it’s nothing.  All the while, Li’l April is sticking a microphone in her face, encouraging her to use her journalistic instincts to get the scoop on Baxter.  April overhears Baxter in another room, talking to a mysterious benefactor.  After Baxter leaves for the evening, April messes around on his computer (at the behest of the Raph doll and Li’l April, while her father leans over her shoulder and tells her not to go through with it).  She finds the symbol of the Foot Clan and clicking it opens a secret elevator.  On the ride down, Mrs. O’Neil (still cooking dinner) warns her that things aren’t safe.

April exits the elevator to find a mass production line of Mousers.  Baxter appears behind her and tells her that she’s seen too much.  He sics the Mousers on her and they eat Li’l April (who tries to interview them).  Donatello (dressed as Sigmund Freud) thinks that its striking symbolism as April flees into the sewers.  She’s cornered by the Mousers and Mr. O’Neil tells her that this is where “reporter’s instincts” inevitably lead.  At the last second, she’s saved by the Ninja Turtles and faints. 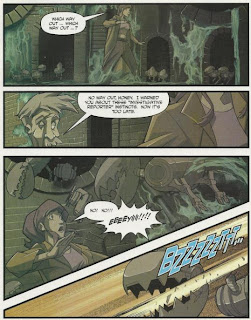 April awakens a moment later, realizing the entire surreal, out of joint experience was nothing more than a dream.  She sees the Turtles and faints again.

*This issue is adapted from the 4Kids TMNT animated series episode “A Better Mousetrap”.

A quick anecdote, but back in the summer of 2003, this was the first issue of Dreamwave’s TMNT series I bought.  And after reading it, it was the last.  I didn’t get the remainder of the run until a couple years ago when every single issue turned up in the quarter bin at my local comic shop (along with pretty much everything Dreamwave ever published).  So coincidentally, exactly 10 years has passed since I last read this comic.

Well, I didn’t like it then and I don’t much care for it now.

“A Better Mousetrap” is definitely an improvement over the first issue of the series, primarily because the focus is on an established character readers care about and not a pair of nobodies who won’t have any impact on the series whatsoever.  Writer Peter David tries to crack the lens on this episode a little bit more; whereas before, we saw events from the cartoon through a different POV, now we’re seeing them through a different POV AND as part of a dream.

The disjointed effect is kind of neat, but it’s mostly incoherent.  Once again, David is writing these issues under the assumption that all readers have watched the animated series as a prerequisite.  If you’re coming into the Dreamwave comic blind, you don’t stand a freakin’ chance.  With that in mind, this issue is especially unforgiving to newcomers with its dreamlike “jump from one moment to another out of chronological sequence with no rhyme or reason” approach.

I think the desired effect was for us to learn more about this incarnation of April, but what all does David actually tell us?  That when she was a little girl, she wanted to be a reporter but her father wouldn’t let her?  That’s the long and short of it, really.  It explains her inherently curious nature, which is neat (and, of course, is a throwback to the old Fred Wolf cartoon and the live action movies), but aside from that, we’re afforded no greater glimpse into April’s personality or history.  If anything, the “dream sequence” effect seems to have been applied just to keep this from being a straight retelling of the episode and to try and jazz the story up a bit.

On the subject of Lesean Thomas's art, you can tell he lacks ambition (or motivation) and doesn’t like to step out of his comfort zone; namely, what he knows he can draw easily.  As a result, look at April throughout this issue.  I hope you like the ¾ view of her face: 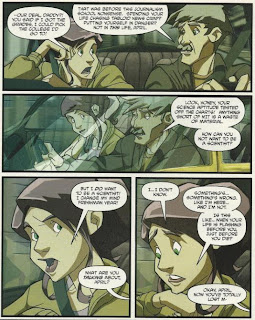 Because that’s the angle she’s drawn in for practically every panel.   The same angle, over and over, with an expression that only slightly changes between what could very easily be cut ‘n paste work.  I mentioned this in my review for the last issue, but Thomas represents everything wrong with using tablets for artistic shortcuts.

And I honestly can’t say if the coloring is better or worse in this issue than the first.  On the bright side, I can mostly tell what’s going on this time around, but on the down side, there are so many “shiny” highlights added to the characters, I think Ruffolo and Curtis were under the impression that people are made of plastic.

Oh yeah, and once again, the Turtles are only guest stars in their own comic.  Sorry I’m saving that comment for the end, but it’s a problem epidemic to the entire Dreamwave series and I kind of think it ought to go without saying.