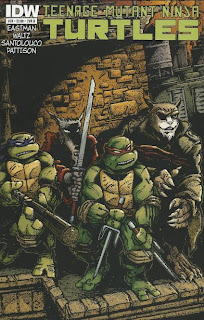 At Foot HQ, Karai’s geommu practice is interrupted by the Shredder, who tells her that it’s time to get to work.  Karai asks how the mutants will know where to find them and Shredder simply smiles. 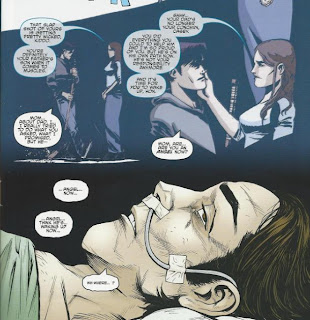 At the hospital, Casey is dreaming of his deceased mother.  He apologizes to her for not being able to save his dad, but she tells him it’s alright and time to wake up.  Casey comes to and is greeted by the elated April and Angel.  Casey is weak, but wants to be caught up to speed on everything he’s missed.

Old Hob and Slash lead Splinter, Raph, Don and Mike to the waterfront, where Hob says the Foot are hiding out with Leo.  The Turtles aren’t so trusting, but follow him to a warehouse because they’ve no choice.  Before they leave, however, Mike gives Slash a candy bar in an effort to befriend him.  Slash enjoys the treat.

Hob picks the lock on the warehouse and ushers the Turtles and Splinter inside.  He immediately closes and locks the door behind them, not wanting to be inside for what’s about to go down.  No sooner do the Turtles realize they’ve been hoodwinked, the lights turn on and they’re addressed by Shredder, Karai and Alopex.  Splinter tells Shredder that no blood needs to be shed this night, but Shredder scoffs at the remark, telling Splinter that as they speak, his Foot Soldiers are consolidating power across the city by taking down street gangs and the Savate.  Splinter demands Leonardo back, but Shredder tells him Leo is “no more”.  Enraged, Splinter lunges at Shredder, but is knocked to the ground by Leonardo, now garbed in Foot regalia.  Leo tosses his blue bandana at Splinter, telling the rat that he is no longer his son. 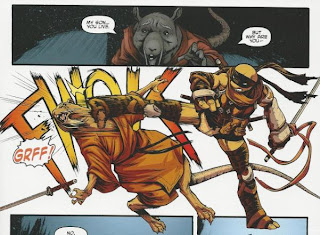 The Turtles confront Leo, but he’s unmoved by their words and attacks each of them.  With little effort, he defeats them all in one-on-one combat.  He then moves to execute Splinter, but Shredder orders him to stand down, claiming the rat for himself.  The Turtles collect Splinter and try to make a retreat, but the door is locked and dozens of Foot Soldiers drop down from the rafters.  Suddenly, Slash comes barging through the wall, making an exit (and asking Mike for more candy).  The Turtles and Splinter escape, reluctantly leaving Leo with the Foot. 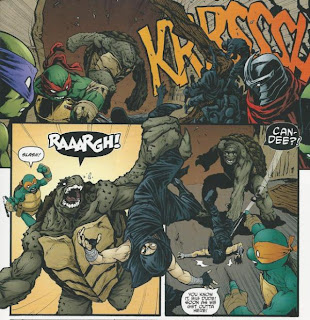 They reconvene on a rooftop with Old Hob, ready to wring his neck.  Hob says that the Foot employed him to lure the Turtles into the trap.  However, he says that sending Slash in to break them out was his own idea, squaring things with both sides.  The Turtles are in no mood to argue with Hob and let it go (while Mike gives Slash another candy bar).  Meanwhile, Splinter clutches Leo’s old bandana and looks out upon the city.

While the previous installment in “City Fall” had perhaps an excess of story, “Part Three” is lighter in that regard, being more concerned with the action.  “Dark Leo” (as the editor’s notes in the letters column calls him) makes his dramatic entrance and, for what’s already a plot point that’s hanging by a thread of credulity, the creative team has to make it look as convincing as possible.

And they do a pretty good job, all things considered!  Santolouco’s design for Dark Leo is perhaps a little busy, but if ANY comic book characters have an excuse to wear tons of pouches, it would have to be the Turtles (they need to store their smoke bombs and shuriken SOMEWHERE, after all).  I just wrote a sentence about Leo’s goofy-looking scarf and then immediately deleted it, because I just realized he’s simply adhering to the Foot’s fashion trend (both Shredder and Karai have the same red scarves, while Alopex’s is grey).  So good on Santolouco for that neat little detail.

I dig Leo's new forearm guards as they seem pretty damn practical for a guy who gets in sword fights everyday and are a lot more useful than the standard knee and elbow pads the Turtles usually wear.  These guys are running into life-or-death battles, not going rollerblading on the boardwalk; they should probably take greater safety precautions.  Also, Leo now only has a single katana and two tanto (short swords) as his main weapons, which is a neat change-up.  Leo’s katana actually looks to be drawn as a proper katana for a change and not a ninjato (I know I always call them “katana” in my reviews, but that’s because they’re always identified as such in the comics, whether they’re consistently drawn to be ninjato or not).

Now, getting back to the subject of the story, there’s a bit less to talk about.  Dark Leo’s unveiling was cool and all, but I can’t help but feel the sequence was just a tad cliché.  Complete with a contrived excuse for Leo not to kill Splinter at the last second thanks exclusively to the villain’s hubris.  “Don’t kill him!  I want to do it myself!” is about as bullshit an excuse as “No!  I have an ingeniously over-complicated and ironic time-delay death trap I want to kill him with because it will be more amusing!”  If we’re ever going to take this Shredder seriously, he needs to be less like Cobra Commander.

To be honest, I was more interested in what Hob’s got going on than Leo’s turn to the darkside.  He doublecrossed the Turtles, but then he also sort of didn’t.  THAT was the one moment in the comic that stepped away from the string of clichés (don’t get me started on Casey meeting the ghost of his mom while in his coma) and took me by surprise.  Hob’s definitely growing as a character, as he’s actually demonstrating a glimmer of intelligence; playing both sides and living up to both ends of his bargains without fully doublecrossing anybody.  But there’s another reason why I’m more interested in Hob’s story than Leo’s and it’s nothing to do with the writing of this comic, but the current way publisher’s solicit and tease their upcoming books.

We already know what the next storyline after “City Fall” is going to be thanks to IDW soliciting its books months in advance.  We’ve already seen the covers.  They gave everything away during their panel at San Diego Comic Con.  I try my best to avoid spoilers by not going into upcoming issue threads on message boards and skipping multi-page previews that all the comic news sites post a week before the fucking issue hits the stand... But the viral marketing machines are MERCILESS and no matter how hard I try, something ALWAYS gets spoiled because IDW lets SO MUCH info about their future storylines leak online HALF A FREAKIN YEAR before the issues are even out.

This sort of shit is KILLING the storytelling in comics (not just TMNT, but any book that has the next 7 issues solicited a half-year in advance, fuckin spoiler-riddled covers and all).  Thanks to all the covers and issue summaries and various leaks and teases, I already know how Dark Leo’s story is gonna turn out and I’ve been actively trying NOT to spoil anything for myself.  I imagine the people who go out of their way to gather spoilers and leaks practically have the next 5 issues of TMNT sitting on their harddrives in some cobbled-together fashion.

But Hob’s storyline, at least as far as I can tell, hasn’t been completely blown by IDW’s hype division.  So there’s an actual sensation of mystery and suspense about it, which has me intrigued.  Hopefully I can read that story in the actual pages of IDW’s TMNT comic and not as an update on Comics Alliance or Comic Book Resources two months before the issue is published.  One can dream.

Holy shit, that was an annoying tangent.  Sorry, everyone; I didn’t mean to let the hate flow through me like that.  Please understand that my frustration is so fierce because I LIKE this comic quite a bit, so having vital story details spoiled for me really gets my goat.

Grade: C+ (as in, “Could be the first time I’m noticing this, but has Santolouco always drawn Mikey with little pouches on his belt to holster his nunchakus instead of the standard loops most artists draw?  I actually kinda like the little sacks, now that I’m noticing them”.)
Posted by TMNT Entity at 9:21 PM