In past installments of Awesome Turtles Pictures, we looked at some character evolutions, such as how "Terrorpin the Terrible" became Tokka, or how Baxter Stockman got fused with a character called "The Fly" to become Baxter-Fly. Today, we're going to look at how some toy design pitches evolved into the recognizable characters we ended up getting.

First up is Peter Laird's initial sketch for "rhino mutant".  Guess who he wound up becoming? 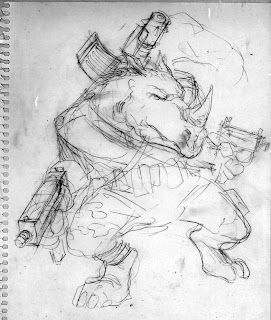 So yes, contrary to popular belief, Eastman and Laird did do the original design and creative work for Fred Wolf/Playmates characters such as Bebop and Rocksteady (think about that next time you accuse them of hating the Fred Wolf/Playmates characters and concepts).  Interestingly, a LOT of these action figure pitch sketches I've got stored away are credited to Peter Laird; I'm having a hard time finding any by Kevin Eastman.  Seems either Laird pitched a lot more toys than Eastman did, or Eastman simply hasn't shared his sketches online like Laird has. 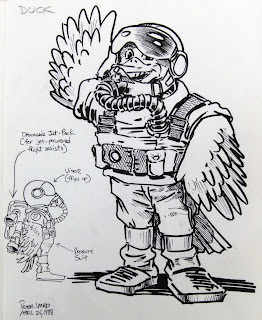 Here's a character named "Scalien".  His robotic exoskeleton brace giving him mechanical limbs reminds me a bit of Fishface from the Nickelodeon TMNT cartoon and toyline.  Being a mutant cobra, however, he may be a predecessor to the Playmates character Scale Tail, who dropped the robotic limbs in exchage for, like, snake limbs.  On a snake.  That 80s toyline was weird, man. 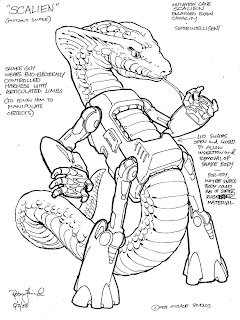 These next two sketches are for a character called "The Unknown" (love the name), who is described as being a failed attempt to combine two animals into a single mutation.  He wound up evolving into Mutagen Man, who it seems will be making a comeback in the Nickelodeon TMNT cartoon. 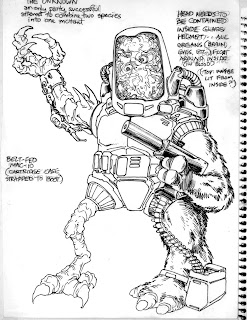 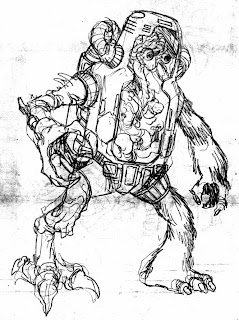 Some wild stuff.  And those are the ones that actually MADE it to the shelves in some form or another.  Believe it or not, but there were design pitches considered too weird for the 80s toyline.