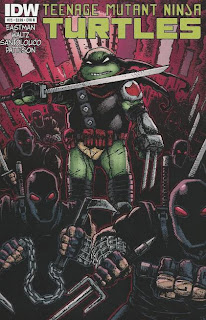 At a warehouse, Karai ferrets out a gang of Savate ninja.  The Savate feel they have the upper hand, but it was all an act so that Dark Leo could ambush the Frenchmen.  Karai wants to kill the field leader, but Leo insists she let him return to his boss, Victor, with the warning to stay out of the Shredder’s way. 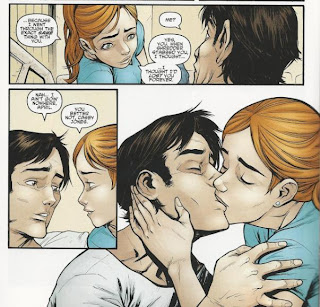 At the hospital, Casey and April receive a status update from Don and Mike (via Skype).  Casey is blown away by the idea that Leo has switched sides, but Don tells him there’s a lot of that going around, as Hob and Slash seem to be getting buddy-buddy with them, lately.  After the call ends, Casey confesses to April that he feels useless sitting in his hospital bed, missing all the action.  April tells him that she’s just happy to know he’s safe and the two finally share a kiss.

In the alleys outside the Skara Brae, Raph shakes down the hobos Timmy Two-Shoes and Kanada.  He remembers them from the whole briefcase incident and demands they give him the scoop on everything going down in the underworld scene.  Timmy says that there’s a major power struggle in action and it goes all the way up the ladder. 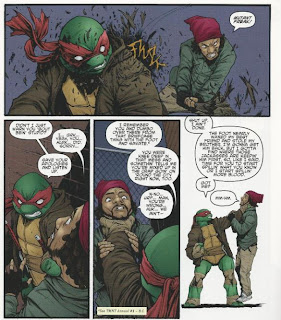 Elsewhere, Victor and the Savate crush a unit of Foot Soldiers.  Victor is approached by the Italian Marcello, who says the Families have called an emergency conference.  Victor has a sit down with Antonio, the head of the Italian Families.  Antonio says he’s concerned about Victor’s confrontational approach to dealing with the Foot Clan and that it’s causing them all trouble.  Marcello speaks out of turn, causing Victor to kill him and tell the families they can either be predators or prey.

At Foot HQ, Leo and Karai deliver news of their successful ambush to the Shredder and Kitsune.  Karai is incensed to learn that it was Leo’s decision to use her as bait to lure out the Savate and she questions Leo’s qualifications for Chunin, as he once again shied away from killing.  Shredder silences Karai and then dismisses them both.  Before leaving, Leo looks at Shredder and Kitsune and has a brief vision of Hamato Yoshi and Tang Shen.  Once they leave, Shredder tells Kitsune he is concerned that maintaining his "no kill" order to Leo will only stunt his effectiveness as Chunin.  Kitsune warns Shredder that Leo’s grip on his past life still remains and that forcing him to kill may break their hold on him.  A Foot Soldier delivers a message from Victor: A severed hand with the note “WAR” on it.  Shredder informs Kitsune that the time to keep Leo on a leash is running short.

At the Jones household, Casey’s dad thinks about the trouble his son is in and how useless he’s been as a father.  He declares “No more!” then tears off his shirt, revealing a tattoo of a purple dragon.

At a safe house (marked with the same purple dragon symbol), Splinter has a pow wow with Old Hob.  He says that he will consider joining with Hob’s mutant gang, but only under the condition that Hob help return Leo to sanity.  Hob accepts, though under a condition of his own: Splinter must complete a mission for him as a show of good faith.

Prowling the streets, Raph interrogates crooked Detectives Miller and Corbin, demanding they tell him where the Foot Clan resides.  Raph is pulled away by Don and Mikey, who have had enough of Raph’s tortured loner act.  Raph confesses that he feels responsible for Leo’s predicament, but his brothers tell him that this is no way to get things resolved.  They decide to work together on a plan.

Elsewhere, Shredder and Leo monitor Savate headquarters for their decisive strike.  Shredder orders Leo to fight alongside him, demoting Karai and Alopex to the secondary unit.  Alopex whines to Karai that being reduced to back-up is demeaning.  Karai informs her not to overestimate her value, but that a secondary strategy is never a bad thing to have... 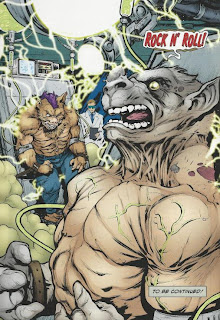 As she says this, in a secret lab somewhere, two thugs are transformed into a mutant warthog and a mutant rhino.  And they couldn’t be happier about it.

*The events of TMNT Villains Micro-Series #6: Hun take place between this and next issue.

*Timmy Two-Shoes, Kanada and Detectives Miller and Corbin last appeared in TMNT Annual 2012, which is also when the whole “brief case thing” that Raph references went down.

*This issue was originally published with 5 variant covers: Cover A by Santolouco, Cover B by Eastman and Pattison, Cover RI by Mark Buckingham and Charlie Kirchoff, Cover RE for Jetpack by Eastman and Cover RE Jetpack with Michelangelo bandana.

Whew!  That was a lot to take in, wasn’t it?  There’s a strange flow to the narrative of “City Fall”, as we drift from segments that are loaded with story and narrative progression, and then into segments that are all action and spectacle.  Toss in the vital interlude chapters in the form of the Villain Micros and you’ve got an arc that moves at a disorienting pace.  It’s not a terrible structure, as it keeps you on your toes, but it certainly feels rather spastic.

The fourth chapter is all about moving things along and only here, at the halfway point, do we finally get to see the gang war come into play.  This thing has been simmering since as far back as TMNT #6; nearly twenty issues ago.  It’s gratifying to finally see the plot thread come into relevance, but yikes that was a long wait.  Still, it’s comforting to know the writing/editing team behind IDW’s TMNT have had such a far-reaching game plan since Day One.  We live in a time where creative teams are swapped out every 6 issues and the “grand scheme” approach has become a relic of a bygone era.  So knowing that this was all planned out two years in advance is impressive.  Just, you know.  It can be a bit of a nerve-grinder to read a plot thread in one issue and then have to wait 20 issues for it to bear fruit.

The Savate ninja are finally taking center stage and man, they had better live up to the hype.  All they’ve been utilized for so far was comedy relief in the 2012 Annual.  I enjoyed that story, but as a first impression, it made the Savate out to be woefully ineffectual criminals.  Having been placed under new management since we last suffered them, however, I expect they won’t be rendered in such humorous capacity again.  I suppose it’s a side effect from leaving a plot point to boil for two years, but it's a gamble; you build a lot of hype and if you fail to deliver, the whole thing could blow up in your face.  If the Savate don’t satisfy 20 issues worth of build-up, well, that’s two years of plotting and two years of reader expectation down the drain.

But before we get all doomy and gloomy in here, the “Krang War” arc was much the same.  General Krang was introduced in TMNT #1 and it wasn't until TMNT #17 that his arc came to a head.  And I loved it.  The build-up was long and excruciating, but the end result was a satisfying read that met my expectations.  No reason the same can’t happen for the Savate, so let’s wait and see what happens (and if you've been reading this comic, waiting is something you ought to be an expert at by now).

Jeez, put a lid on it, you big crybaby.

I remarked in my review for the Karai Villain Micro that she lacks a personality beyond being resentful and entitled, so I’m really hoping “City Fall” is where Karai finally grows as a character.  The editor’s remarks in the letters column assures us she’ll be a major player in the second half and we’re already seeing her handiwork at the end of this issue, so I’m content to presume big things await her.

And oh yeah, now there’s a cliffhanger splash page if I ever saw one.  I’ve been anxiously awaiting Bebop and Rocksteady since they first cameod (as humans) in the Raph Micro almost two years ago.  Again, their development has been another long simmering plot point, but one that’s finally come to fruition.  I don’t want to talk about them too much until they’ve finally done something in this series, but man, I can’t wait until they do.

All these paragraphs and I’ve yet to remark on the Turtles.  With so much going on, the non-Leo TMNT kind of fall into the cracks of this issue.  Don and Mikey are reduced to giving Casey and April status updates and reigning in Raph’s renegade act.  The end result is that they decide to work together to get Leo back, an obvious conclusion I would have thought they’d have been able to come to without making a big production about it.  Really, Raph’s rebelling just serves to remind readers that the surplus of characters introduced in the 2012 Annual still exist.

Anyhow, to wrap things up (I haven’t even bothered with developments like Casey and April locking lips, Splinter and Hob playing odd couple, the Purple Dragon foreshadowing or Shredder revealing that he ordered Leo not to kill anybody), after last issue’s lack of story, this issue just unloads the plot developments on you.  But I’m digging seeing all these long stewing storylines finally pay off, so hey, bring em on.

Grade: B- (as in, “But the editor’s note at the end said Pizzaface is never gonna happen.  I am disappointed beyond the realm of consolation”.)
Posted by TMNT Entity at 6:51 PM