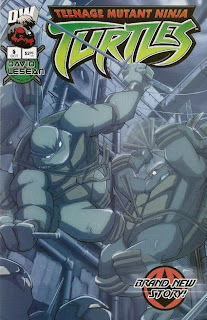 “Shadows of the Mind’s Eye”

Brooding on a rooftop, Raph is ticked that he can’t be thankd by the people he helps; that ninja have to stay concealed in the shadow.  Seeing a cat stuck in a tree, Raph discretely throws his sai, cutting the branch so the cat can land safely in the arms of the little girl (Pammy) below.  Raph figures he deserves one small thanks; just one.  A vision of Splinter warns him not to, but Raph approaches Pammy anyway. 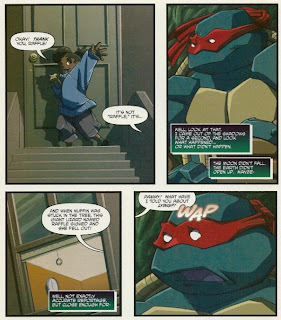 Fishing for praise, he tells the little girl that he cut the branch and saved her cat.  Pammy is grateful, then runs back inside her apartment to tell her mom all about “Raffle”.  Listening in, Raph hears the mother (Sheila Shaunston) tell Pammy not to lie and then a smacking sound.  Thinking Mrs. Shaunston is abusing her daughter, Raph leaps in through the window to yell at her.  Turns out Mrs. Shaunston was just swatting flies, but one look at Raph causes her to faint.  Raph panics and calls 911, but Pammy tells him that her mom faints all the time and that she’ll get better.  Raph decides to leave before he makes things worse.

The next night, Raph comes back to the stoop outside the apartment to check on Pammy.  Pammy tells him that when her mom told the paramedics about “an armored frog”, they took her away to the Belleview Psychiatric Hospital.  According to her daddy, Pammy may not be seeing her mom for a long time.  Raph promises Pammy he’ll make things right and leaves.

At Belleview, Dr. Benton is examining Mrs. Shaunston.  He hand waves away all her claims about “an armored frog” as nothing but a symbolic hallucination; the same sort of stuff he hears day in and day out.  He has a nurse escort Mrs. Shaunston to her room and then gets down to her paperwork. 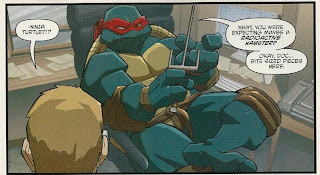 Suddenly, Raph appears in the doctor’s chair.  He threatens the doctor, telling him to release Mrs. Shaunston with a clean bill of health or else.  Dr. Benton responds by zapping Raph with a taser.  As Raph collapses, immobilized, Dr. Benton proceeds to have a mental breakdown.  He now sees that all the things his patients told him they saw were real.  He proceeds to put a “CURED” stamp on Mrs. Shaunston’s file, then casually exists the office.

Raph struggles to his feet and is greeted by the sound of gunshots from the roof.  A nurse outside the office says that Dr. Benton has lost it and gone to the roof with his deer hunting rifle.  Out in the street, pedestrians scramble as bullets strike everywhere.  Among them is Pammy, who has come to Belleview with her father to visit her mother.  Dr. Benton lines Pammy up in his sights, but before he can squeeze the trigger, Raph knocks him out. 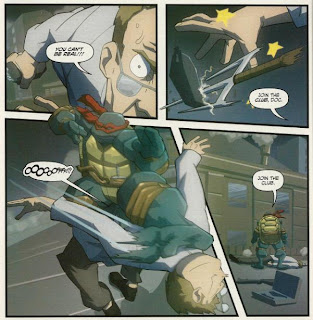 Back at Pammy’s apartment, the whole family is reunited for a trip to the zoo.  Pammy tells her mom that “Raffle” was actually a nice armored frog.  Mrs. Shaunston says that, at the very least, he tried very hard.  Below them in the sewer, Raph is pouting over the chain reaction of misery his presence caused.  Splinter appears next to him to remind him that they do not hide in the shadows, but live within them as a part of them.  Raph asks Splinter if he ever wants more out of life.  Splinter tells Raph that wanting more isn’t his job, it’s his son’s.

*This issue also included a promotional poster insert for “T4: The Turtlenator”.

Unlike the previous four issues, though, this one has the benefit of not trying to force a new story into the framework of an existing cartoon episode.  As a result, we get a pretty clean narrative from beginning to end.  As a oneshot story about Raph and his misguided attempts to get some recognition for his good deeds, it’s actually pretty amusing.  The domino effect of everything getting worse and worse the more Raph tries to “fix” things makes for a funny series of events.  Or, at least, I hope they were intended to be funny and not completely serious.

I think what bugs me with this story is more that David didn’t seem to have a clear idea how to end it.  The whole concept is that by involving himself, Raph only makes things worse and worse for everyone.  So you would think that the solution would be for Raph to suppress his ego and let things work themselves out.  But no, the lesson is obscured because Raph proceeds to meddle and meddle until things finally reach a more or less neutral position.

Well, “neutral” might not be the word for it, as Dr. Benton’s life is now completely destroyed because of Raph’s interference.  David struggles to find a villain for the issue and eventually settles on Dr. Benton.  But Dr. Benton never really does anything wrong until Raph drives him insane.  Up until that point he was just a guy working in a psychiatric hospital helping people with delusions on a day to day basis.  Okay, sure, he didn’t believe Mrs. Shaunston’s story about “an armored frog”, but why should he?

And then there’s that awkward, clumsy bit where Dr. Benton decides to stamp “CURED” on Mrs. Shaunston’s case file just to conveniently resolve her conflict.  Because that’s what it takes to get released from a psychiatric hospital, right?  A big red stamp on your folder that says “CURED”?

At the center of “Shadows of the Mind’s Eye” there’s a decent story, but it’s fumbled about way too much.  It’s hard to sympathize with Raph, because of how selfish and petty he's acting.  It’s hard to feel that a lesson has been learned at the end, because Raph solves the problem by doing the same stuff that caused it in the first place.  And it’s hard to feel like Raph saved the day at the end, anyway, when his actions drove a normal person nuts.

Dreamwave has mercifully pared down the coloring crew to just two people; Li on flats and Curtis on colors.  With less cooks in the kitchen, the pages are actually comprehensible for a change.  The colors are brighter and the lines are sharper; thanks in large part, I’m sure, to a 50% decrease in useless photoshop filters.  That aside, many of the same problems remain, such as everything being drawn separately on a tablet and combined after the fact, blah blah blah looks like shit.

Though man, Thomas is not very good at drawing facial expressions appropriate to the situation.  Here’s Pammy, telling Raph that her mother has been committed to a psychiatric hospital: 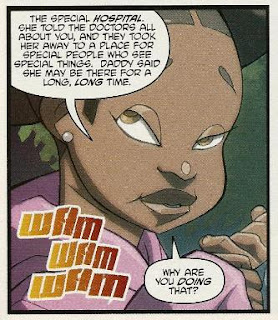 Why is she giving Raph the bedroom eyes?  And really, if you took that head all by itself, would you think it belonged to a 5 year-old?  Because it’s supposed to.

Anyhow, issue #5 is supposedly where Dreamwave’s TMNT comic turns a corner and improves.  However, it feels more like one step forward, two steps back.  Old problems are solved in exchange for brand new ones.  But who cares?  There’s only two issues left, anyway.

Grade: D+ (as in, “Decided to give the extra ‘plus’ there because of an included Simpsons quote and nothing else.  ‘Can’t sleep, clown will eat me’.”)
Posted by TMNT Entity at 11:17 AM