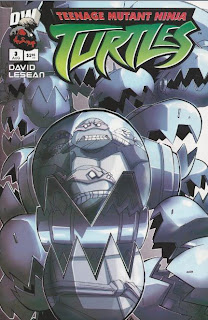 “Attack of the Mousers”

At a bank cleverly named “BANK”, Mousers tear through the vault from below and make off with millions of dollars in cash and jewelry.  As they return to Stocktronics, Baxter Stockman enjoys his success.  In the back of his head, however, he ponders that all of Man’s achievements have been made in the pursuit of women... 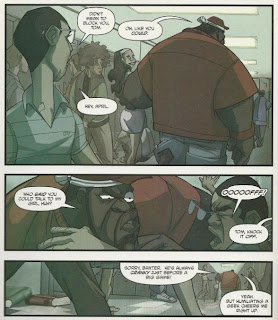 The past.  Baxter is a teenager in high school.  A geek at the bottom of the food chain, he’s bullied by the football jock Cirrone.  Baxter covets Cirrone’s cheerleader girlfriend, April, and plans to win her for himself by sabotaging the bully.  He reaches into his locker and pulls out a football.

The present.  Down in the sewer lair, the Turtles and April watch news of the bank robbery.  Mikey uncharacteristically spots teeth marks on the debris and deduces that the Mousers were behind the theft.  April spills the beans that she worked for Stocktronics, but when she discovered the Mousers, Baxter Stockman tried to have her killed.  Raph suggests they all head to Stocktronics and shut things down, not only to stop the robberies, but because the Mousers destroyed their original lair.  April then awkwardly recites the TMNT’s origin to them, having heard the story recently from Master Splinter.

At Stocktronics, Baxter receives a message from his mysterious benefactor.  Baxter mouths off to him, telling him that he procured the funds he promised and demands not to be bothered again.  The mysterious benefactor warns him about the price of failure and then signs off.  Baxter mutters that everyone is stupid but him, then takes a stroll down Memory Lane…

The past.  Hiding below the bleachers during The Big Game, Baxter whips out a device to guide his remote control football.  As Cirrone runs to catch the ball, Baxter guides it through the air toward the goal post.  Cirrone crashes into the goal post, breaking his arm and ribs and ending his high school football career.  Baxter gloats at the top of his lungs that his plan was a success and now, with Cirrone out of the way, he has a chance with April.  Unfortunately, his gloating gave away his entire scheme to the nearby cheerleaders (April amongst them) and band members.  Baxter is summarily curb-stomped by the angry teenagers. 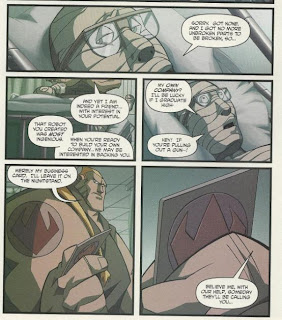 Baxter awakens in a body-cast in the hospital.  He’s approached by Hun, leader of the Purple Dragons and an agent of the Foot Clan.  Hun tells Baxter that with guidance from his backers, he could one day have his very own company.  Baxter is intrigued and accepts Hun’s business card.

Some years later, at Stocktronics, Baxter is approached by April O'Neil, applying for the job of lab assistant.  He isn’t impressed with her until she tells him her name.  Rather attached to the name “April”, he decides to hire her.

The present.  The Turtles infiltrate Stocktronics and run a gauntlet of laser beams.  They interrogate Baxter, who is baffled as to what they are.  April tells him that they have enough evidence to put him away for years.  Baxter quickly recalls the Mousers and orders them to tear the building apart.  Don and April attempt to override the command while Baxter escapes down a secret passage.  As the building collapses, he bumps into Hun.  Hun clutches Baxter by the scruff of his neck and tells him he’ll have to report his failure to the Master in person. 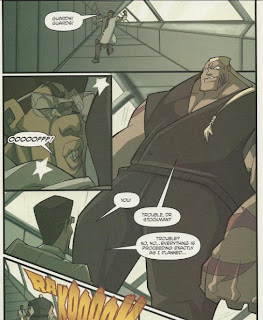 At Foot HQ, Baxter tries to play things off as a minor setback, but Oroku Saki isn’t having it.  As Hun drags Baxter away to be punished, Saki tells his technicians to give a report from the Mouser memory banks.  The tech says that a Stocktronics employee, likely April, triggered a self-destruct on all the Mousers.  Saki awkwardly scoffs that there’s always a woman somewhere in the mix.  The tech then shows Saki the last image in the Mouser’s memory: a heat signature of the Turtles.  Enraged, Saki hurls a razor blade through a window.

*The flashback in this issue covers events (the TMNT’s origin) from TMNT (Dreamwave) #1.  The destruction of the TMNT’s original lair by the Mousers happened in the cartoon episodes, but didn’t make it into these adaptations (despite being referenced in the dialogue).  I guess it wasn’t important.

*This issue is adapted from the 4Kids TMNT animated series episode “Attack of the Mousers”.

This issue is just all over the place.  Peter David wants to continue telling the episodes from the POV of a different character, but he’s also trying to do a better job of working the Turtles into the scripts so a book titled “Teenage Mutant Ninja Turtles” can feature the Teenage Mutant Ninja Turtles for more than 3 pages per issue.  There’s a terrible spotlight imbalance in this installment, and despite an increased presence, the TMNT’s story arc seems more confused than ever (again, if you haven’t seen the episode this comic is adapting, you are hopelessly fucked).  The lair got destroyed?  When did THAT happen?  April’s their friend now?  Guess that occurred off-panel.  And this Splinter guy sounds like a real cool dude; maybe we can meet him someday!

As for Baxter’s expanded origin, it’s probably the best of the “new POV” side stories David has written so far, in that it actually tells us something new about the established character.  Unfortunately, it’s really uninspired: Baxter was a nerd in high school who got picked on by jocks and now he uses his intellect for evil.  Wow, David, did you come up with that all by yourself?

And the overarching “theme” is embarrassingly half-formed.  Baxter claims that everything a man does is to impress women and that, as muses, women secretly hold all the power in the world.  Okay, sure.  But David never develops this.  Baxter’s crush on (high school) April only comes up in two panels: When you see pictures of her in his locker and when he shouts that with Cirrone in the hospital, he can win April for himself.  While his actions are still motivated by the pursuit of a woman, any obsession or romantic inclinations on his part are barely touched upon.  And when Shredder coincidentally recites verbatim Baxter’s opening statement about how “there’s always a woman”, it reads like a total non sequitur to what the Foot technician was telling him.  Why is Shredder going on about women-this and women-that when all the tech did was mention, off-handedly, that Stockgen employed an individual named April?  It is INCREDIBLY forced, and while it wouldn’t have “saved” this issue by a long shot, the whole thing might have read better if David had just dropped his oh-so-clever message about women.

Seriously, it’s not like Peter David was new to comics when he wrote this thing.  The guy had celebrated runs on the Incredible Hulk and X-Factor, for crying out loud.  Heck, I loved his original run on X-Factor in the ‘90s!  It’s pretty much the only X-book of the era that sincerely withstands the test of time as being genuinely GOOD storytelling.

So why the fuck are these Turtle comics so amateurish and terrible?  Did Pat Lee emit pheromones that made all his employees suck as badly as he did?

And on the subject of “sucking at their job”: Lesean Thomas, everybody!

Okay, so I’ve droned on in my previous Dreamwave reviews about how obvious it is that Thomas draws everything separately on a tablet and then tries to paste all the pieces together after the fact, but man, it just gets worse every issue.  Check out this panel where teenage Baxter is holding the remote control for his football device: 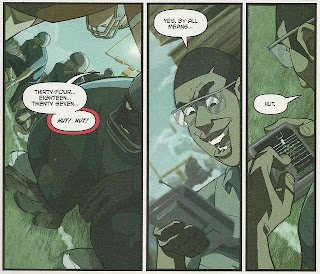 Does it ACTUALLY look like he’s holding that thing to you?  It’s really clear that Thomas went so far as to draw even the handheld props separately and then cut ‘n pasted them onto the characters.

Or maybe it’s just the coloring?  That remote looks like it alone is in soft focus while Baxter isn’t.  Unfortunately, I don’t know which colorist to blame: This issue had FOUR of them!  And one guy doing “flats”, so technically five.  Oh, and an inker.

And for anybody who says that Thomas’s lineart was perfectly fine and it was just the inept coloring that butchered his work, just look at these damn Turtles: 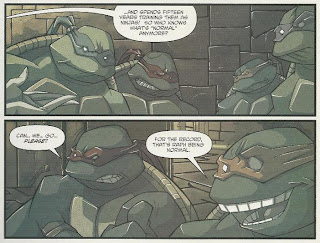 Boy, those sure are some dynamic expressions on the top panel!  I especially like the way the chin wrinkles make it look like they’re all perpetually biting their bottom lip.  And look at Raph in that bottom panel.  I spent WAY too much time trying to figure out where the hell his left hand went.  Eventually, I deduced that it was folding under his elbow joint, but if Thomas was aiming for an “arms folded” look, the composition is just awful.  The wrinkle lines on Raph's right arm are placed in such a bad spot, they look like lines extending from his wrist, terminating into thin air so that it seems like Thomas just didn’t bother drawing his hand.  The “arms folded” pose might have been clearer if, say, Raph’s right hand was visibly resting on his left arm, but that entire arm is blocked by two of Mikey’s fingers in the foreground, desperately trying to motion toward Raph.

The reason I’m scrutinizing this one panel is because EVERY panel has fundamental failures in basic composition and layout like this.  This is what happens when you draw your characters separately and then arrange them overtop each other in a panel.  You don’t plan ahead, vital details get cropped out or covered up, the characters look like they're floating over the environments instead of interacting with them and perspective?  FUCK perspective!  Perspective is for chumps!

Jeez, I expect this kind of half-assed cut ‘n paste junk from places like CTRL ALT DEL.  But then, I guess it was my mistake to hold Dreamwave to a higher standard than a webcomic.

Also, this issue is the first to include a letters page!  Incidentally, all the letters are so flattering and full of advertisements for Dreamwave exclusives (such as the ultra-rare, "get it now before it sky rockets in value" Pat Lee variant cover of TMNT #1), that I largely suspect Pat Lee wrote the letters himself.

Grade: F (as in, “Fan art.  The fan art printed at thumbnail size in the letters page of this issue looked better than the actual art filling out its pages.  That’s Dreamwave quality in a nutshell, folks”.)