I've posted it before, but not as an Awesome Turtle Picture, so I'm postin' it again.
I don't think anything better sums up the Image Comics TMNT Volume 3 series than this advertisement, published in Bodycount #2 (April, 1996).
﻿ 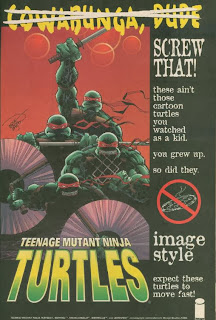 Mocking elements related to the cartoon series, promising that this series is "grown up", mild swearing, incentive to buy the comic as a collectable because it will most assuredly sell out quickly, Erik Larsen artwork...

All this thing needs is a can of Surge and a cross-promotion with the X Games and it'll be Terminally '90s.

FUCK YOU, CARTOONS!  FUCK YOU, PIZZA!  FUCK YOU, EVERYTHING!  THE TURTLES HAVE GONE EXTREEEEEEEEEEME!