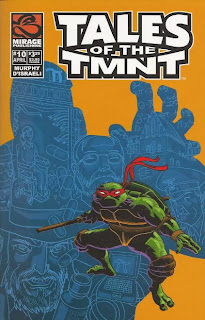 Frontispiece: On an alien planet, Donatello (wearing a space suit) is surrounded by a gaggle of weird creatures.  He recalls one of the first books he ever read, “Strange Creatures from Time and Space” by John Keel, and how it inspired him to look beyond established facts and consider more bizarre possibilities.  And after encountering the likes of Triceratons, Utroms, fish-people and giant alien insects, he’s glad he made that decision.  In fact, it reminds him of a story…

In a Hassidic Jewish neighborhood, in the dead of night, several pharmacies and grocery stores are broken into.  The police say they can’t find any clues and disregard the case with apathy.  The local Jews, however, decide to form a mob and track down the thief.  They eventually stumble upon Donatello as he rummages through the dumpsters outside a scrap yard.  Mistaking him for the thief, they attack.  Not wanting to hurt them, Don ends up taking a few lumps before escaping. 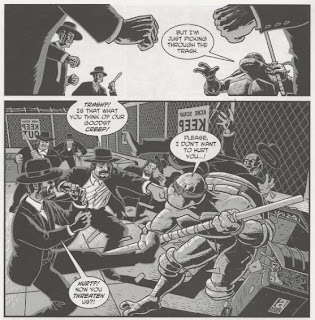 Meanwhile, a lumbering figure trudges to the nearby suburbs where it enters a home.  The figure brings medicine and fruit to the bedroom of a small boy named Ben.

Down in the lair, Don does some research and learns that these thefts have been plaguing the Jewish community for some time.  He decides to investigate after dark.

Don checks out the shops broken into and the only clue he can find is dried clay.  He hears an alarm go off and hurries to the source.  He finds a trail of fresh clay and follows it to a blind alley, where it ends at a small hole in the wall.  A mob is formed and they begin chasing Don, again mistaking him for the thief.  Don scales the wall and picks the trial back up, leading him to the suburbs. 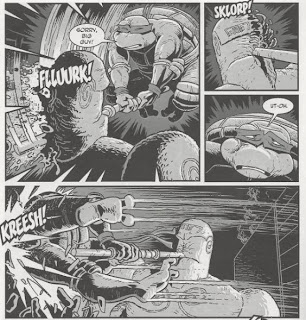 Don is suddenly attacked by a huge Golem, upset that it’s being followed.  Don tries to fight the Golem, but the creature is made of clay, so all his blows with his staff amount to nothing.  As the Golem throws Don around, the mob catches up and discovers they were after the wrong guy.  The Golem eventually discards Don and enters back into the house where it has been staying.

Don follows and finds the Golem in a child’s bedroom, giving medicine and food to the corpse of a young boy.  The Golem explains that its creator, David, brought it to life with the instructions to continue Ben’s care after he’s passed away.  Don explains to the Golem that Ben is dead, but the Golem does not know what “death” is.  Don tells him that death is when memory ends and who we are ceases to be.  The Golem becomes very frightened, worried that now that it no longer has a purpose, it will soon die. 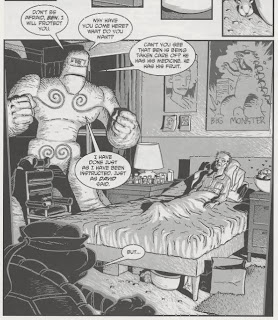 The mob then rushes into the bedroom and the ringleader says that the Golem is an affront to God and must die.  Terrified, the Golem jumps through the window and absorbs the mud in the front yard, growing to titanic size.  Don can’t fight something so big, but the leader of the mob tells him all he has to do is erase the first letter of the word on the Golem’s forehead (the “aleph”).  Don erases the first letter of the aleph with a swipe from his bow, changing the Hebrew phrase from “truth” to “death”.  The Golem shrinks and becomes inert.

Epilogue: Down in the lair, in his lab, Don has gathered the remains of the Golem as well as the laptop of David Chudnovsky.  He learns that David was a mathematician obsessed with the concept of pi.  Knowing that pi goes on forever, David felt it was the mathematical way of understanding God and eternity.  In his journal, David explains that in Pargue, in 1580, Rabbi Judah Loew Ben Bezalel created a Golem to protect his neighborhood.  The Golem was eventually killed and locked in the attic of the synagogue.  Then, in 1942, Hitler ordered the synagogue to be inspected, but feared the attic and ordered no one to go in there.  This clue led David to the remains of the Golem.  Then, using his knowledge of mathematics and science, he revived the Golem to care for his invalid son, Ben.  David was dying from an incurable disease (the same disease he’d passed down to his son) and needed someone to care for his child after he departed.

Hearing David’s voice in the recording, the Golem awakens and rises from the table.  Donatello is shocked, as the aleph on his forehead still reads “death” in Hebrew.  The Golem explains that it was never dead; it just thought it was dead and went still.  The Golem then wipes a layer away from its forehead, revealing that behind the aleph is the symbol for pi.  Don asks what the Golem will do with its eternal life.  The Golem says that it will watch over the Jewish neighborhood, but more importantly, it will remember everything.  Forever.

*This story takes place in the “Mirage Volume 3” era.

*As explained in the opening editorial, a “kaddish” is a Jewish prayer said after a family member has died.

*This issue also featured the bonus story, “The Question” by Murphy, Lawson and Talbot, and a bonus character study of Donatello by D’Israeli.

For the record, I’ve read “The Mothman Prophecies”.  John Keel was a certified lunatic.  Donatello should probably use more discretion when selecting his idols.

Anyway, this was a pretty touching story and definitely one of Murphy’s better contributions to the second volume of Tales of the TMNT.  The reveal that Ben has been dead for months as the Golem has continued to care for him was more moving than horrific.  I think a lesser creative pair would have elected to focus on the gore and nastiness of that scene, but Murphy and D’Israeli understood that the impact of that sequence was meant to be the emotional weight, so Ben’s decayed body is seen in only two panels, either at a distance or partially obscured.  It was tasteful rather than gratuitous and made the moment much stronger.

The story in general just flows very well and it’s one of Murphy’s tighter scripts.  I complain about him a lot, because when Murphy writes a bad story, it is a BAD story, but when he hits the marks he produces some great one-shots.  I think “Kaddish” benefits from having no ulterior motives.  Usually the worst of Murphy’s output are the stories where he’s trying to use the Turtles to make some sort of political or social or environmental statement on his behalf and the storytelling ends up taking a backseat to his personal agenda.  But even though “Kaddish” is steeped in Jewish mythology, those elements are used to flesh out the story, not as some springboard for Murphy’s latest outrage.

The Golem doesn’t have much of a personality, but being the shadowy “monster” in a one-shot story, it could only get so much time to develop.  But you can still infer enough from the Golem by its actions and limited dialogue to understand it has a good heart and is capable of all the emotions and faults humans are, from violence to fear.  It only makes one cameo appearance after this issue (actually, it made its cameo before this issue was published; this issue was done to explain its deal retroactively), but I think it could have made for a decent recurring ally.  As it is, the Golem joins the ranks of a dozen other fascinating characters introduced in Tales Vol. 2 who are summarily never heard from again.

D’Israeli drafts some great pages, illustrating a superb sense of lineweight, perspective, motion and “cinematography”.  I haven’t read any of his 2000AD stuff (because I’ve never read 2000AD), but he does good work.  One of my favorite details was that Don retains his swollen cheek and eye through the duration of the story (after getting beaten up near the start).  It makes him look lopsided and fugly, but it’s refreshing to see uncharismatic battle damage linger in a comic book.

There really isn’t much to gripe about in “Kaddish”.  Some of the Jews in the mob talk like ethnic stereotypes (I couldn’t help but read them with Jackie Mason’s voice), but I’d like to think that was intentional, as it offers a bit of levity to what’s otherwise a pretty grim story.  Don’s singing of a song I’ve never heard of goes on for way too long.  Reading lyrics are great when you’re familiar with the source, but if you don’t know the tune it really is an awkward chore that takes you out of the story flow.  And Don sings a LOT of the lyrics.

Grade: A (as in, “At first I thought this issue was going to guest star ZZ Top”.)