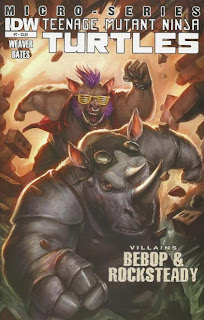 Two gang members, Bebop and Rocksteady, are currently taking a pounding from their leader.  The hood drums them out and tells them never to show their faces again.  Bebop and Rocksteady return to their rattrap apartment to sulk, having been kicked out of every gang in New York for screwing up even the simplest jobs.  They’re sick of being small timers and want to gain power and notoriety, so they hit up the bars, looking for work.

They eventually work their way up from the wannabes to the lowest ranks of the Foot Clan, mostly by beating and killing people with brute force.  After meeting Alopex, they decide they want to become mutants, too.  Eventually, they earn the chance to participate in a life-or-death brawl set up by Karai: Winner gets to be a mutant.  They are victorious and shortly afterward are mutated into a "rhino-saurus" and a warthog. 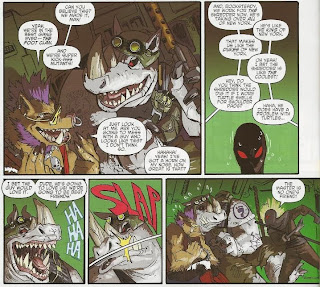 At the palatial HQ of the Ghost Boys, Karai sits down for a talk with Tong while Bebop and Rocksteady stand outside with the Ghost Boy security team.  Bebop decides to play the old “what’s that on your shirt?”/nose-flick gag on a Ghost Boy, and not knowing his own strength, breaks the thug’s nose.  This escalates into a firefight.  Tong, hearing this, accuses Karai and the Foot of trying to eliminate her gang and declares war. 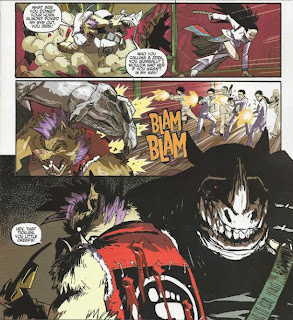 Karai tries to defuse the situation, but Bebop and Rocksteady only make things worse by going after Tong (who is inhumanly fast).  As Tong escapes into the innards of the building, Rocksteady gets the bright idea to barrel through the many walls as a shortcut.  He does so, but only ends up bumping into Bebop and the two imbeciles let Tong make it out the front door.  Police, responding to the racket, try to arrest Tong, only for the entire building to collapse (because of all the walls Rocksteady knocked down).  Bebop and Rocksteady panic and plow through the cop cars in a mad rush to escape.

At a train yard, they proceed to evaluate their performance.  They’re pretty sure Karai died when the building collapsed and see themselves getting kicked out of the Foot Clan for their incompetence.  Rocksteady suggests that since Karai is dead, they return to Foot HQ and just say that she deserted.  Karai isn’t dead, however, and has overheard the entire mutinous conversation.  She orders her Foot Soldiers to execute Bebop and Rocksteady.  A massive brawl ensues and the mutants proceed to kill every last Foot Soldier in a blind fury. 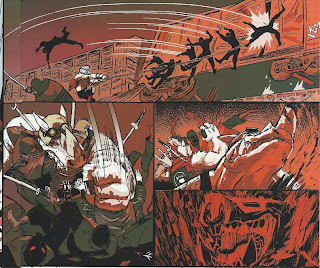 With that out of the way, rather than attack Karai, they ask her to give them one more chance.  They really like the Foot Clan and really respect the Shredder (though they’ve never met him) and don’t want to be kicked out.  Karai is shocked to seesuch loyalty, especially after she tried to have them killed.  She quickly disables Rocksteady and holds a sword to the roof of his mouth.  She tells the mutants that they may remain with the Foot, if only as blunt instruments, but they must remember that they belong to the Clan.  The mutants happily agree and Karai sheathes her sword.  They apologize for screwing things up, but Karai informs him that the Ghost Boys were planning a coup and the Foot were going to destroy their organization eventually, anyway.  Rocksteady wonders if the Shredder is as mean as Karai, but Bebop assures him that the Shredder has to be a pretty solid dude.

Back at their rattrap apartment, the two mutants briefly consider getting their punk band back together before discarding the notion as they now have better lives and more important things to do.  They then realize how much they hate the old apartment and proceed to gleefully tear down the whole building.

*This issue was originally published with 3 variant covers: Regular Cover by Tyler Walpole, Cover RI by Bates, and Cover RE Double Midnight Exclusive by Chris Uminga.

This was without a doubt the longest simmering plot thread in the IDW comic.  Bebop and Rocksteady, as human thugs, were introduced back in December of 2011, making foreshadowed comments about their desires to become mutant henchmen.  It took nearly two years to see that plot thread brought to fruition.  Was it worth the wait?

Some folks might be disappointed in IDW’s incarnation of the two brainless hench-mutants.  Two years is a long time to anticipate something and it gives you ample opportunity to imagine just how YOU would like to see the characters reincarnated.  I know a lot of people were expecting them to be more serious threats, discarding the silliness of their Fred Wolf cartoon counterparts in exchange for more effective villainy.  And it’s not exactly like IDW hasn’t set a precedent for that sort of thing, either.  When they resurrected the Neutrinos for the “Krang War” arc, gone were the Beatnik-isms and fun-loving hijinks, replaced with grim, ultra-serious angst and intrigue as the hot rodding teenagers from Dimension X became brutal, tactical commandos for the military.

So seeing these updated incarnations of Bebop and Rocksteady display the exact same level of intellect as their kid’s cartoon counterparts… I can see how some crowds might have interpreted that as a letdown.

What matters is whether or not they’re effective in a fight.

Bebop and Rocksteady work as weapons of mass destruction you just point, unleash and then take cover.  As long as they can give the Turtles a run for their money and KEEP proving themselves to be viable threats, then Bebop and Rocksteady can be as stupid and silly as the writer wants them to be.  But if they start fucking up every mission, handing victories to the protagonists because they can’t get anything right, devolve into pitiable gag enemies whom the Turtles handily defeat with relative ease in every encounter, THAT’S when things start to go wrong.

I would like to think that the current writers at IDW are cognizant enough of this fact and won’t relegate them to worthless foul-ups.  This issue seemed to illustrate exactly that, too, as Bebop and Rocksteady get their one fuck-up out of the way in their initial mission.  It’s a nice way of showing that they aren’t going to be the self-defeating mongoloids of the Fred Wolf cartoon, as Karai realizes that they’re best used as brute force and nothing else.  Likewise, despite their stupidity, they prove nigh-invulnerable to all forms of attack and waste an entire unit of Foot Soldiers.  I don’t think we have anything to worry about.

Dustin Weaver and Ben Bates plot a pretty good story, but like all the Villain Micros, it’s more of a “to be continued in City Fall, happening now!” sort of thing.  What I appreciated is that it deviated from the format of most of these Villains Micros, which have relied on an ever-present narration or inner monologue from the star character to feed details and back story to the reader.  This installment eschews that angle (likely because a dual monologue would have been unwieldy) and just features Bebop and Rocksteady blundering their way through a simple mission, making things worse and worse the more they try to “fix” it.

I do think there was some inconsistency in the dialogue, though.  Weaver can’t seem to settle on how “stupid” he wants Bebop and Rocksteady to sound.  At times they’ll use poor grammar such as “we wasn’t”, while elsewhere they’ll speak properly with a “we weren’t”.  And some dialogue just didn’t sound right coming from them, like “Plus, no one else will have us”.  That's just a little too eloquent for Rocksteady, don't you think?  Weaver could have pepped that up to something like, I dunno, “Dat, ‘n we ain’t got nowheres else ta go”.

The dialogue doesn’t give them very strong “voices”, either.  And not just in terms of inconsistent good/bad grammar, but with the lack of any sort of verbal tics.  Even Steve Murphy, when writing the Archie TMNT Adventures comic, kept in their goofy habit of pronouncing “turtles” as “toitles” in the written dialogue.  It’s a little thing, but again, it goes a long way in giving them a stronger voice.

Ben Bates is just great.  I only have, like, 10 books on my pull list and by some divine grace he has shown up as an off-and-on penciler for 4 of them.  It’s really impressive the number of varying styles he can adapt to on the fly whilst still giving his work a unique quality.  This issue was a weird mix of heavy duty violence and goofy comedy, but Bates transitioned the scenes quite well.  You’ve got goofy moments where Bebop and Rocksteady are taking crap from a Foot Soldier that can’t stand hearing them yammer, or their struggle to keep pace with Tong as she flees down the halls.  But then there are action sequences loaded with kinetic energy, such as their flight through the police cars.  And all that eventually segues into a brutal montage of them tearing a unit of Foot Soldiers to pieces in the midst of a berserker.  The gears shift really well and I never felt like the attitude was erratically jumping back and forth.

Well, it was a ridiculously long wait, but IDW’s introduction of Bebop and Rocksteady gave me pretty much what I was looking for.  Some elements could have been stronger (the dialogue), but I am happy that the humor of the characters made the transition intact.  It remains to be seen how IDW treats them from here on out, but I trust they didn’t bring them back just to waste them as ineffectual comic relief.

Grade: B- (as in, “Bebop kinda got the short end of the stick in this issue, though, as he didn’t really have any kind of obvious animal-related power to exploit in battle”)