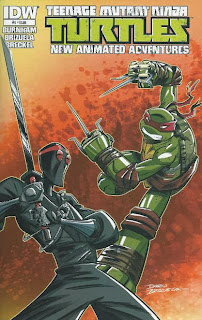 Down in the lair, the Turtles are training with a “king of the mountain” scenario… Raphael being “king”.  Leo makes it to the top of the pile of crates and Raph blindly attacks him.  Leo casually disarms his brother and scolds him for being too aggressive.  Splinter, in turn, scolds Leo for failing to see that Raph’s aggressiveness counterbalances his own cautiousness; that their differences are why they’re so effective as a team.

April then pops in to show them a photo she took while riding the bus near 110th.  It’s a Foot Soldier sneaking around.  The Turtles leave to investigate, though Splinter forces April to stay behind and continue with her reflex training. 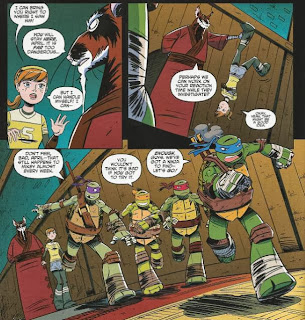 The Turtles eventually find the Foot Soldier trying to break into a grocery store.  They confront him, only to find that he was setting up an ambush.  The Foot attack, but this time with a new tactic: blow darts.  Mikey deflects them with his shell, but Raph takes a dart to the shoulder and is immediately felled.  Leo calls a retreat and the Turtles vanish.

At Foot HQ, Dogpound informs the Shredder that the plan was a success.  By creating poison from the rare kyosuu fruit using an ancient Foot Clan recipe, they were able to debilitate one of the Turtles.  Shredder tells Dogpound that Splinter will no doubt recognize the ailment and send the Turtles to collect some kyosuu fruit to fashion a cure.  Knowing that the only place to get kyosuu is in Little Japan, he orders Dogpound to setup another ambush.

Back at the lair, the Turtles interrupt April’s training with their grim news.  Splinter recognizes Raph’s malady and tells them that the kyosuu poison will not kill him, but it will destroy his sense of balance and end his ninja career.  He tells his sons to procure a kyosuu fruit in Little Japan, and quickly, as Raph has begun hallucinating.

In Little Japan, the Turtles finally track down a grocery store that carries the fruit.  They snatch one, but find all exits blocked by Foot Soldiers.  They carefully look for alternate means of escape, but find nothing.  Leo then realizes that they’re being too cautious; that they need to start thinking like Raph.  Don suggests that they do something crazy and unpredictable. 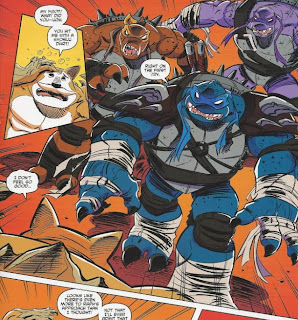 Don comes plowing through the exit using Mikey’s shell like a shield to block all the blow darts, causing the Foot to waste their most precious ammo.  The threat of the darts out of the way, the Turtles make short work of the Foot Soldiers.  Suddenly, Dogpound comes dropping down and wrecks them all, snatching the kyosuu fruit from Leo in the scuffle.  He reminds them that even at four strong, they aren’t a match for his might.  Leo once again suggests that they all “do what Raph would do” and blindly charge the hulking brute.  Discretely, Leo plucks a dart from Mikey’s shell and sticks Dogpound with it as he kicks Mikey and Don.  Dogpound immediately begins hallucinating, seeing the Turtles as huge monsters.  Dogpound summarily faints and the Turtles regain their fruit. 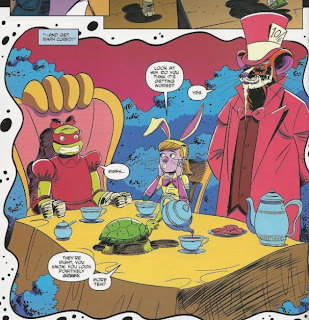 Later, Splinter administers the cure to Raph in the form of a very foul-tasting soup (and none too soon, as Raph's hallucinations were getting freakier).  Raph recovers expediently, though he’s disappointed that his brothers were able to defeat Dogpound without his help.  Splinter assures him that although he was not with his brothers physically, he was with them in spirit.  He then informs the other Turtles and April that they are all to eat the nasty kyosuu soup to inoculate them from any further blow dart attacks.  The Turtles promptly “do what Raph would do” and run away screaming.

*In Japanese, “kyosuu” (虚数) is a mathematical term meaning “imaginary (number)”, no doubt poking fun at the fact that the kyosuu is an imaginary fruit.

Man, it seems like all I’ve been reviewing in the past few weeks have been media based on the new Nickelodeon TMNT cartoon.  The UK Nickelodeon TMNT comic from Panini, actual episodes of the show for Adventures in Poor Taste, and now a timely release of IDW’s TMNT New Animated Adventures...  I think I’m about ready for a break.

Anyhow, Erik Burnham takes over for Kenny Byerly on this issue.  Burnham had previously written the TMNT New Animated Adventures Free Comic Book Day 2013 story and proven that he has a good handle on these incarnations of the familiar characters.  So needless to say, you won’t miss a beat in the changeover from Byerly to Burnham.

Like all the issues of New Animated Adventures thus far, this is a solid done-in-one with a good flow to the story and the conflict.  The lesson is spelled out, but not to the point of talking down the readers.  At the grocery store, when the Turtles have to brainstorm “what would Raph do”, they don’t just stupidly charge the Foot Soldiers in a blind rage.  They actually put into practice Splinter’s true lesson about pooling their individual (if disparate) talents and produce brute force with a glimmer of strategy to it (using Mikey’s shell to block the darts while aggressively charging).  I think a lesser writer would have had them all idiotically belly-flopping into combat, which would have been missing the point, so good on that.

Less apparent, though, is Mikey’s more... substantial contribution to the outcome.  It’s a bit reminiscent of TMNT New Animated Adventures #2; a point is made to showcase what each Turtle individually brings to the table to achieve the resolution (Leo’s cautiousness, Raph’s aggressiveness, Don’s intelligence), but Mikey ends up empty handed.  I’m left wondering if even the writers are hard up to think of a single positive quality Mikey has to offer other than, well, “human shield”.

Don’t worry, Mikey.  Your time will a come.

A quick inquiry, because I’m honestly not sure of the answer, myself: Does Shredder address Dogpound as “Dogpound” in the TV show?  I ask because he addresses him as such in this issue, and I always thought Shredder called him by his real name (Bradford) and “Dogpound” was just what the Turtles called him.  How would Shredder even know about that derogatory nickname, anyway?  Just curious if anyone can correct or confirm me on that.

Grade: B (as in, “But as much as I like Brizuela’s art, the only thing conspicuously missing from the ‘Alice in Wonderland’ hallucination was a top hat and monocle for Spike”.)
Posted by TMNT Entity at 6:19 PM