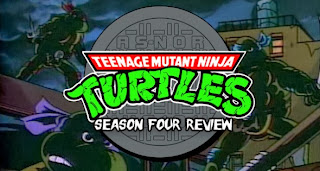 With this batch of 7 episodes, I knock out the last of the syndication era.  It's a pretty rough ride, with an inexplicable 2-parter about an alien Casio that defuses explosives, two episodes that would wind-up getting recycled wholesale in seasons 5 and 6 (and done better both times), and some other utter shit I'd like to forget.

The good news is that once season 4 transitions out of syndication and to CBS Saturday Mornings, it gets a whole lot better.  So I'm looking forward to getting to those, next.

And my review of TMNT (IDW) #27 should come around later today when I get off work (or, failing that, after I get back from my Halloween plans; so late tonight).