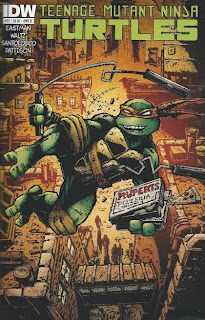 Outside a seedy joint, Woody and Mike put the finishing touches on their cunning plan.  Woody gives Mike (who is dressed as an Italian chef) a fresh pizza and then skeedaddles to safety.  Apparently, they’ve been at this all night, but Mike has a good feeling about this round. 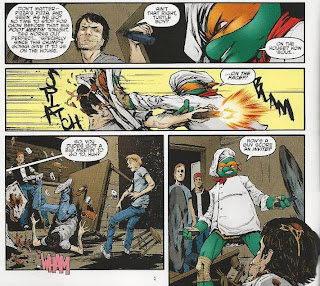 Mike knocks on the door and a couple of thugs answer.  They didn’t order any pizza, but figure they ought to eat before they get going to “the big meeting”.  Hearing all he needed, Mikey ditches the disguise (that wasn’t really working) and starts beating some answers out of the thugs regarding this underworld meeting.

At an abandoned warehouse, Angel finally challenges Hun for leadership of the Purple Dragons.  She hits him with her escrima, but he feels nothing.  Before the fight can escalate, a Foot messenger appears from the shadows with orders to Hun to bring the Dragons to a meeting of gangs where they will all swear allegiance to the Foot Clan.  Hun asks the Dragons if they’d rather be a glorified neighborhood watch under Angel’s leadership or filthy rich under his and the Shredder’s leadership.  The Dragons side with Hun and Angel leaves, defeated.

Down in the church lair, Don shows of the anti-gravity gauntlets to April and Raph.  Suddenly, Mike bursts in with news about the underworld meeting; he has a time and a location.  Splinter tells his sons and April that they must prepare to reclaim Leonardo from the Shredder.

Speaking of Leo, at Foot HQ he is lost in a dream.  He sees himself and his brothers about to be executed by the Shredder in Feudal Japan.  He is confused and thinks everything is all wrong.  The spirit of his mother, Tang Shen appears to him and tells him that he does not belong here.  The Shredder swings his sword and Leo awakens.  Karai has been watching him with a cruel look in her eyes.  Dark Leo asks if everything is ready for the meeting.  Karai sneers and tells him that all the "preparations" have been made. 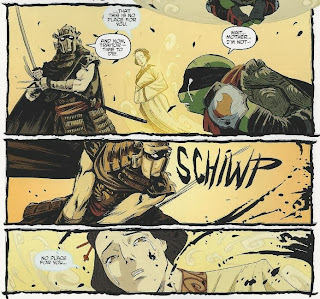 In a parking garage, the Turtles stock up on provisions with Old Hob and Slash.  Raph doesn’t like the amount of munitions Hob is bringing along, but Splinter tells him to appreciate any aid they can get in their mission.  April agrees to operate as getaway driver and sends Casey a text, telling him she’s going to help the Turtles find Leo.

At Foot HQ, Alopex meets with Kitsune.  Speaking in Japanese (as Kitsune does not speaking English), Alopex tells her that when she first heard the stories of a fox-woman from Feudal Japan, it helped her feel at peace, as though she wasn’t the only humanoid fox in the world.  Kitsune replies in English (much to Alopex’s surprise) and tells her that foxes must be cunning and know when to watch and when to act.  Alopex looks surprised, as though Kitsune knows something.

At the hospital, Angel brings Casey his hockey mask which she found outside the Skara Brae.  Casey tells her that his dad came by the other day, looking healthier and happier, and gave him a hockey mask as a peace offering.  Angel spills the beans about his father, “Hun”, and how he has taken over the Purple Dragons and wants to ally himself with the Foot.  Casey grows furious and hobbles out of his hospital bed and gets dressed.  He’s had enough sitting on the sidelines and wants to go to the big meeting to help save Leo and face down his father.

At an old abandoned theater, the Shredder takes the stage as all the gangs in New York watch.  He tells them that he has taken command of every gang in New York, one at a time, with only a single hold out: The Savate.  The beaten Victor is brought onto the stage and Dark Leo hands Shredder a sword.  As Shredder makes an example of Victor by decapitating him, the spirit of Tang Shen appears to Dark Leo and repeats what she said in his dream.  Leo begins to have second thoughts about his allegiance.

Outside the theater, Splinter gives the sign to begin their assault.  Old Hob fires a rocket at the parking lot, exploding several cars as Slash charges the sentries.  The Shredder orders the gangs to leave the theater and deal with the attackers.  Meanwhile, Don uses his anti-gravity gauntlets to levitate a sedan and sends it smashing through the side of the theater.  The Turtles and Splinter invade the theater and tear their way through the Foot Soldiers guarding the Shredder.

In the parking lot, Hun grabs a machinegun and leads the fight against Hob and Slash.  He nails Hob in the leg and is about to gun down Slash when the weapon is knocked from his hand.  Hun turns around to find Angel and Casey (wearing his hockey mask). 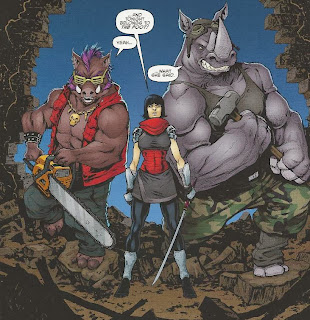 Inside, Don uses his gauntlet to send Shredder careening against Alopex.  Dark Leo attacks Raph but can’t bring himself to deliver a killing blow.  Eventually, he succumbs to the confusion and falls to his knees.  Shredder orders Karai to prevent the Turtles from escaping.  She disables Don’s gauntlet with an arrow then calls in her personal reinforcements: Bebop and Rocksteady.

*Hun took control of the Purple Dragons in TMNT Villains Microseries #6: Hun.  He also tried to recruit Casey into the gang in that story.

*The execution of Leonardo and his brothers in Feudal Japan was seen in TMNT (IDW) #5.

*The underworld meeting was mentioned in TMNT Villains Microseries #7: Bebop and Rocksteady.

But saying this chapter of the arc was “predictable” isn’t entirely honest.  All these big moments were set up and staged very matter-of-factly in previous chapters and they played out precisely as the those previous chapters said they would.  Can you really say something was “predictable” when the story tells you up front “this is what’s going to happen”?  If anything, the past few chapters were the characters all formulating a plan and this is where it all comes together, as Hannibal might say.

Be all that as it may, the unfolding story in this installment is still very exciting, thanks in large part to Santolouco’s artwork.  Hob’s assault on the, um, empty parking lot was some great action movie stuff and I’ll never cease to enjoy watching Slash go on a rampage.

If anything in this chapter confused me, I suppose it might be Angel returning Casey’s hockey mask to him at the hospital.  You see, in the Hun micro, he gives Casey a mask as a gift and it’s the mask he wore at the start of the series (angular shape, no perforations).  The mask Angel gives him is the one he’s been wearing since Santolouco started drawing (round shape with perforations).  I had always figured Casey just had one mask and Santolouco’s design differences were an artist's interpretation, but okay, I guess he had two masks all along.  So Hun gives him his first mask and Angel gives him his second mask and I guess it’s… symbolic?  Like, choosing which side he wants to be on is determined by which mask he prefers?  But there’s no dilemma for Casey and hell, we don’t even see the two masks together.  He actually only mentions the mask Hun gave him offhandedly.

So what we end up with is two dramatic moments in two different issues where someone offers Casey a hockey mask, like it’s setting up some big choice he’s going to have to make.  But there’s no choice at all, not even for a second.

I dunno, it was just really half-baked, is all I’m saying.  In fact, a part of me almost wants to think it was a hastily covered up instance of discontinuity.  Like Hun returned Casey’s lost mask in the micro, but Waltz threw in a scene where Angel returns the same mask in this issue, so some slapdash dialogue had to be added to explain all the fucking masks people keep giving Casey, goddamn.

What the hell?  Three paragraphs?  About THIS?  Jeez, I’m reaching, here.

Honestly, it’s just that when reviewing any penultimate chapter, I kind of want to hold my tongue a bit.  I don’t want to jump the gun and speak as if I know how the story is going to end (though solicits from IDW kind of blew that months ago) and I don’t want to summarize all my thoughts about the arc until it’s properly finished.

So in exchange, I spend three paragraphs bitching about a fucking hockey mask.  Man…

Grade: C (as in, “Casey just needs his star-spangled hockey mask from the Image series and he’ll be all set”.)
Posted by TMNT Entity at 8:50 PM