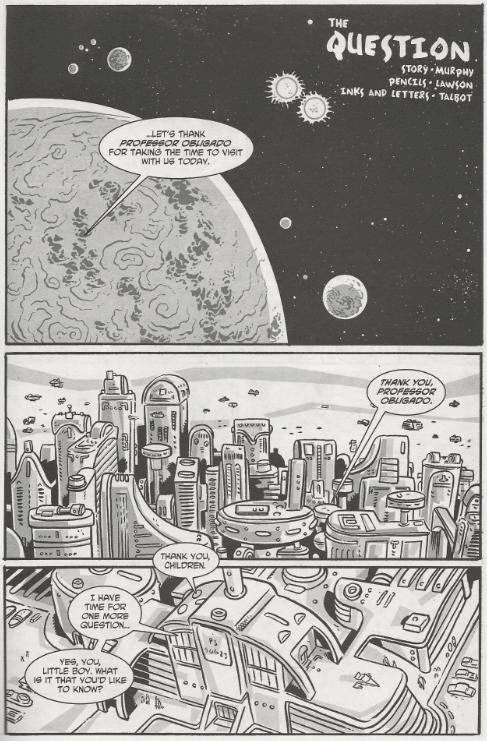 Years ago.  On an alien planet, Professor Obligado is visiting Ms. Grundi’s class in P.S. 90623 as a guest speaker.  During an open Q&A, a young boy named Aevyon asks the Professor what happens when you fall off of the universe.  Obligado is utterly baffled by this seemingly innocent question and promises to find the answer. 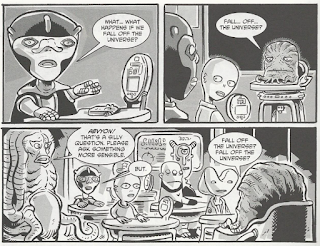 First, Obligado flies out to the edge of furthest space, well beyond the outermost star.  He finds himself surrounded by nothingness, yet since he can perceive the “nothingness” it very well can’t be nothingness at all.  Obligado turns back.

Second, he visits a black hole, theorized to be a gateway beyond the universe to unknown points.  Obligado launches a probe into the black hole, but it indicates the continued function of known quantum laws, meaning something still exists within the black hole.  Obligado looks elsewhere.

Third, he visits Solaris Maximus, largest known sun in the entire universe.  The temperature at its core is so hot it goes beyond all measuring scales, reaching an unquantifiable number.  Despite being the closest tangible thing to “infinity”, it is still something of substance and not what he’s looking for.

Fourth, Obligado takes a more existentialist view of the question and decides to see if he can “fall off the universe” by separating his mind from his corporeal form.  He enters a sensory deprivation tank and sends his mind on a psychotropic voyage.  Despite being as detached from the physical universe as the mind can become, Obligado still does not register the concept of “nothingness”. 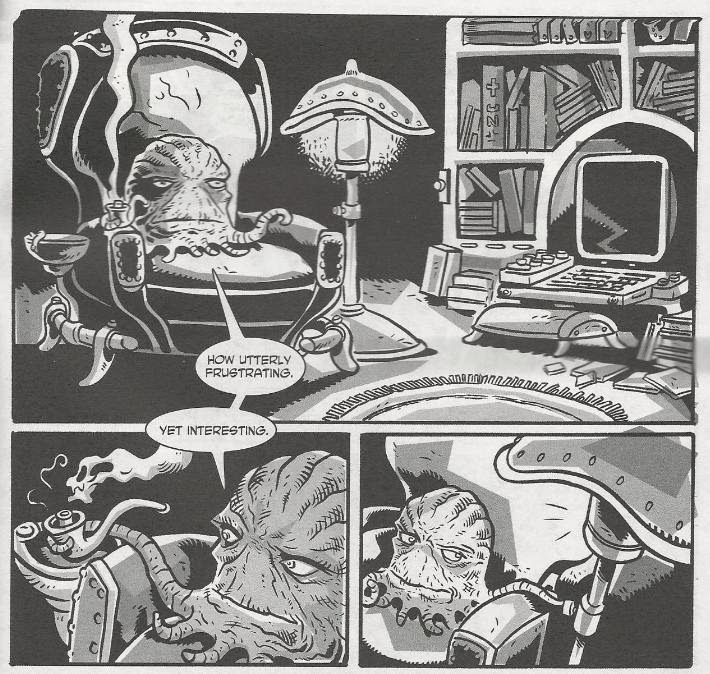 After countless hours of studying and contemplation, Obligado admits defeat.  Returning to P.S. 90623, he informs Aevyon that he doesn’t know the answer to his question.  Aevyon is shocked to learn that there are questions no one knows the answers to and finds the concept scary.  Professor Obligado wholeheartedly agrees with the boy.

*This story is continued from “The Risen”.  The story continues in “First Mud”.

*Despite being the fourth chapter in the serial, this installment begins a flashback portion of the narrative that takes place years before the events of “The Grape”.

We’re into the second part of the Professor Obligado serial, as we follow his existential voyage into the meaning of life.  Despite feeling detached from the ongoing saga of the serial’s prologue (beginning many years in the past), the theme of this story actually ties in with what we’d gotten so far.

Professor Obligado’s quest in “The Question” is essentially to try and understand and comprehend the concept of oblivion.  However, it’s a fool’s mission from the start.  In order to comprehend something, you must have an existing consciousness.  And if your consciousness exists, then you very well can’t perceive “nothingness”.  It’s like trying to remember what your life was like before you were alive; by our very nature we are incapable of quantifying oblivion.

Obligado finds that concept very frightening; it is the ultimate unknown because it can never be demonstrated or perceived.  For those of us who don’t believe in an afterlife, we can at least somewhat relate to Obligado’s fear.  Who hasn’t laid awake at night trying to contemplate the oblivion that follows after death?  It’s a scary thing and there is absolutely nothing you can do about it.  All you can do is accept it as an inevitability and move on with what time you have.

Obligado never puts it in atheistic terms, instead searching for what he describes as “nothingness”.  It’s an academic approach befitting of one known as a “Professor”, but it hits close to home for all of us nevertheless.

This is also where I come to appreciate Murphy’s method of telling Obligado’s story; starting with his death before segueing into the tales of his quest to find the meaning of life.  In “The Question”, we see a Professor Obligado who is discomforted by the concept of oblivion and desperate to understand it for his own peace of mind.  However, in the previous chapter, “The Risen”, we saw how Obligado ultimately embraces his own departure: completely at peace and with a sense of hope.  Reading the end before the beginning helps to take the edge off of this chapter, as we know that despite all his searching and agitated worry, Obligado will eventually find peace at his end.