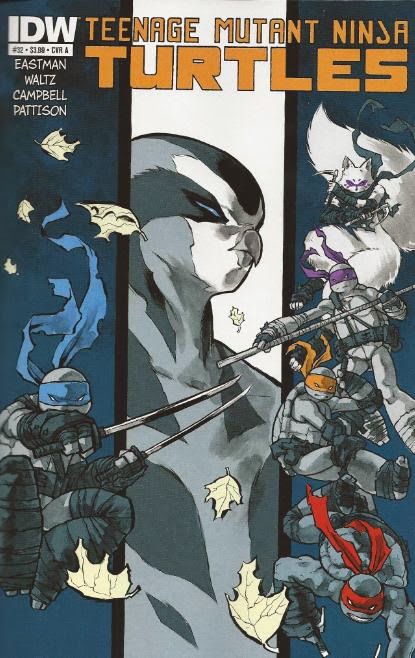 In the barn, Leo engages Koya in battle.  His brothers and Splinter are happy to see him back in form, though they have their hands full with the Foot Assassins, who have just dropped grenades.  While part of the barn explodes, Raph wrestles with Alopex outside, accusing her of leading the Foot to Northampton.  Alopex saves Raph from a creeping Assassin and tells him that she had no idea that the Foot were coming.  The only reason she didn’t strike when the Assassins and Koya attacked was because she froze, fearing the Foot were after her.  As Raph realizes his mistake, Alopex storms off into the woods. 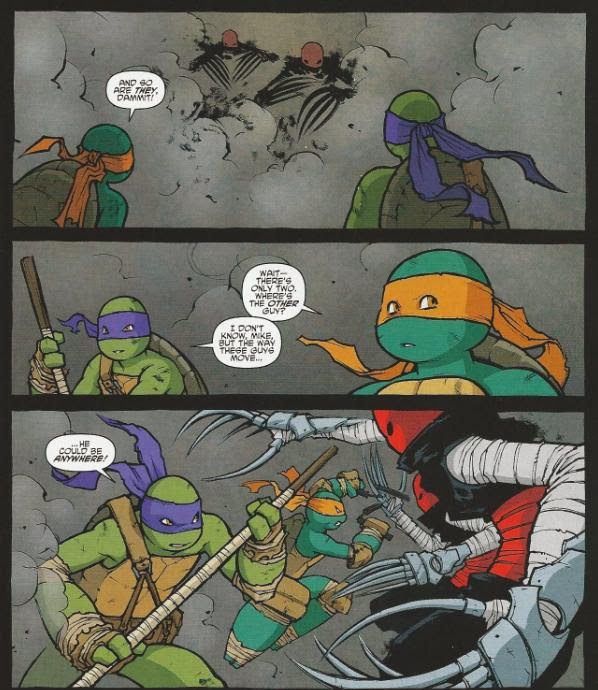 Up in the farmhouse, April is about to tell her mother all about the ooze when they see the smoke coming from the barn.  Much to April and Casey’s dismay, Mrs. O’Neil hops into the van and decides to see what’s going on.

And at the barn, the Turtles have taken down the Assassins, but Koya has Leo at her mercy.  Raph leaps into action, tackling the falcon and sending them both smashing through a wall… and landing right in front of the van.  Koya attempts to take Mrs. O’Neil hostage, but Mikey comes roaring out of the barn riding the motorcycle Don and Casey had just fixed up.  He smashes Koya in the head with the front tire.  Before she can get up, Leo holds his blade to her throat.  Koya tells him to finish her, but Leo refuses.  He tells her that she’s bleeding bad enough as it is and unless she gets medical attention within an hour or two, she’ll die.  Swearing vengeance, Koya calls a retreat and she and the Assassins vanish. 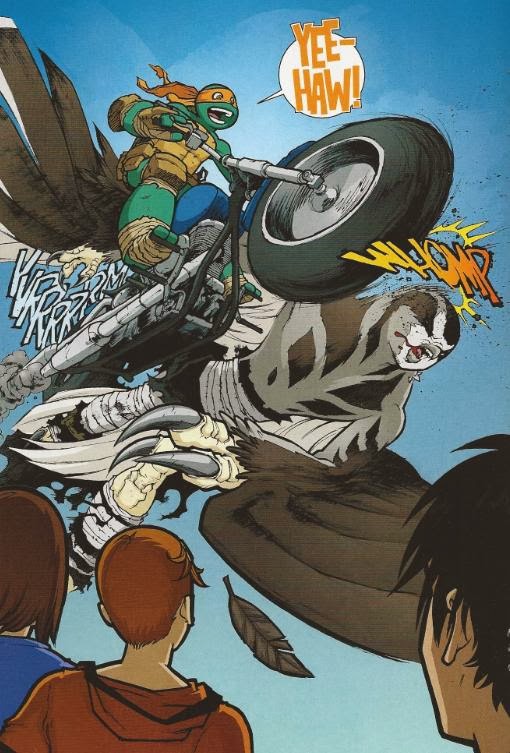 The fight over, April explains to her mom about her mutant friends “from Stockgen” and hands her the vial of ooze.  She tells her mom to trust her, that its healing properties can cure her father.  She also tells her mother to leave Northampton immediately, as the farmhouse is no longer safe.  The Turtles, Splinter, April and Casey then pile into the van and drive off.  Splinter tells them all that he’s very proud of them, but now is the time to return to New York and face the Shredder.  As they leave Northampton, Alopex watches them solemnly from a tree. 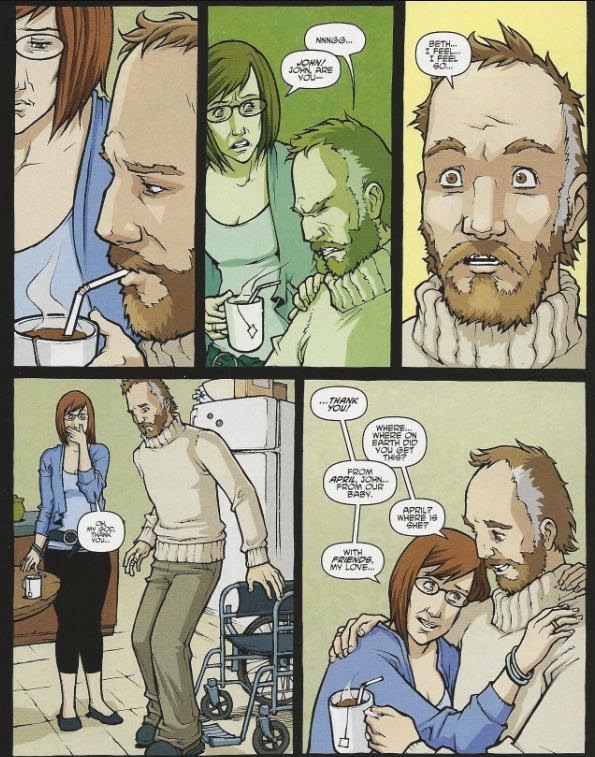 Back at the farmhouse, Mrs. O’Neil slips the ooze into her husband’s tea while telling him that they need to go back to New York so they can “be closer to April”.  After taking a few sips, Mr. O’Neil begins to feel strange and an instant later, finds he can talk again.  Mrs. O’Neil embraces her husband and tells him she got the “cure” from April.

*The events of TMNT Annual 2014 occur between this and next issue.

*This issue also included a 3-page “Behind the Shell” interview with Ross Campbell.

*This issue was originally published with 3 variant covers: Cover A by Campbell, Cover B by Eastman and Pattison, and Cover RI by “s-bis”.

This was a rather short “exile” for the characters; their respite lasting only two and a half issues, really.  It’s hard to gauge the time-span within the comic, but I’d suspect they were only on the lam for a month, tops.  A far cry from the two years the Turtles spent languishing at the farmhouse in the Mirage series, but then, the circumstances behind IDW’s “return to New York” were very different from Mirage’s.  In the Mirage series, the Turtles reluctantly chose to go back and face down the Shredder after a two-year break.  Here, the Shredder pretty much gets to them first and they’ve no recourse but to stand up to him.

Though you’d kind of think he’d have dispatched more than one mutant and four Assassins to deal with his most persistent enemies.  Maybe he figured they weren’t worth the extra manpower?  Hubris, thy name is Shredder.

On the subject of the villains, holy crap, Koya is HUMONGOUS.  At first I thought Campbell was just messing with the scale for effect, but her height remained consistent from page to page.  She’s got to be, like, 7 feet tall or something.  I like it!  It’s a nice antithesis to most female mutants or anthropomorphs or whatever, who are typically lithe and petit.  Koya, on the other hand, is enormous, androgynous, muscular and overall just physically imposing.

I hope Santolouco maintains Campbell’s scale for the character when she shows up again later on.  I’d hate to see her suddenly shrink and get saddled with a run-of-the-mill feminine design because “she’s a girl”.  It was bad enough that they decided to “cutesy-fy” Alopex the moment she switched sides from enemy to ally.  The days of her looking like a renegade from “The Howling” are behind us, I suspect.

With this being the “big finish” for this arc, the bulk of the issue is absorbed by the fight in the barn.  The action is all rendered fluidly with tons of great little flourishes (like how the splintering wood transforms into the sound effects as Raph and Koya smash through the barn wall).  And even outside the fight, Campbell adds some sight gags that you might not notice the first time around, such as the “X”s on the eyes of the defeated Assassins or Mikey hauling a stack of pizzas into the van before they all leave.  Whether you like Campbell’s “cute” style or not, there’s no denying he has a passion for the characters and the work he’s doing, really giving it his all in each panel.  The little touches encourage you to go back and digest each page and appreciate the craftsmanship; there's no workmanlike phoning it in, here.  When an artist really cares about what they’re doing, you can tell, and Campbell clearly holds nothing back.

He’s grown a lot since his work on the Micros and even across this arc and I look forward to whatever he’s got cooking for the TMNT later this year.  Yeah, he’s the one responsible for “cutesy-fying” Alopex, but read the interview in the back of this issue; he wholly cops to aiming for a “cute” style.  You can take it or leave it, but I find his stuff to be a refreshing change of pace from other artists.

Now, there are some… things to talk about with this issue.  April tells her mother, “Slip dad this mysterious vial of glowing green chemicals I stole from a mad scientist and he'll walk again.  Just trust me”.  And Mrs. O’Neil does it.  Just like that.  My GOD she has a lot of faith in her daughter because holy shit.

But maybe that was the point, even if I found it hard to believe, so I’ll let it go.

What truly bothered me is a leftover grievance I had with “City Fall”.  There was a failure in the “City Fall” arc I talked about back when that arc ended and because of that, a moment in this issue meant to be a dramatic turning point just falls utterly flat.  Leo has his blade to Koya’s neck and she’s urging him to, “Prove who you truly are.  Kill me”.  Leo drives the last of the Dark Leo impulses out of his system and spares Koya, because killing isn’t what he does.

Well guess what?  Killing wasn’t what Dark Leo fucking did EITHER.

The Dark Leo arc had the wind knocked out of it because Dark Leo didn’t kill anybody.  So as a result, this defining, dramatic moment where Leo fights the last of his Dark Leo programming and has to resist the urge to slay Koya makes absolutely no sense.  Dark Leo was forbidden by the Shredder to kill.  Dark Leo never killed.  So why would Leo have to fight with himself for so much as a moment about killing Koya, when the impulse to kill was never programmed into him, even when he was Dark Leo?

The melodrama of the scenario hinged on Leo wrestling with his inner demons and finally triumphing, emerging from his funk once and for all.  But the moment requires him to defeat an impulse he never had and it just doesn’t work.  Had Dark Leo taken a life, then Leo’s plight would have carried more weight, but he didn’t so it doesn’t.  And that was the real failing of both “City Fall” and “Northampton”.  “City Fall” pulled its punch at the last second and as a result “Northampton” had a lesser impact than it deserved.  All of Leo’s grieving and moping rang hollow, ending on a scene where he has to triumph over absolutely fucking NOTHING.

His solution to get Koya to retreat was pretty brutal, though.  So I’m proud of him for that.

I hate to end these reviews on a negative note, but I hate to open them on a negative note, too.  It’s all a bunch of bitching.  But even if I felt Leo’s arc and this final resolution to it landed limp, that doesn’t mean the entire “Northampton” storyline was a waste.  There is a lot of strong character work in here and it deviates from the other incarnations of the “exile to Northampton” storyline in enough vital ways to make it stand out.  The art is fantastic, but I think I’ve gushed enough about that.  And above all, I think it was really well-paced as the story moved fluidly without all the weird stops and starts that jerked “City Fall” around.  And Koya’s going to be a pretty cool villain, by the looks of things.

Grade: B (as in, “But forget that X-Files crossover detour.  Just pretend that thing never happened”.)
Posted by TMNT Entity at 6:48 PM