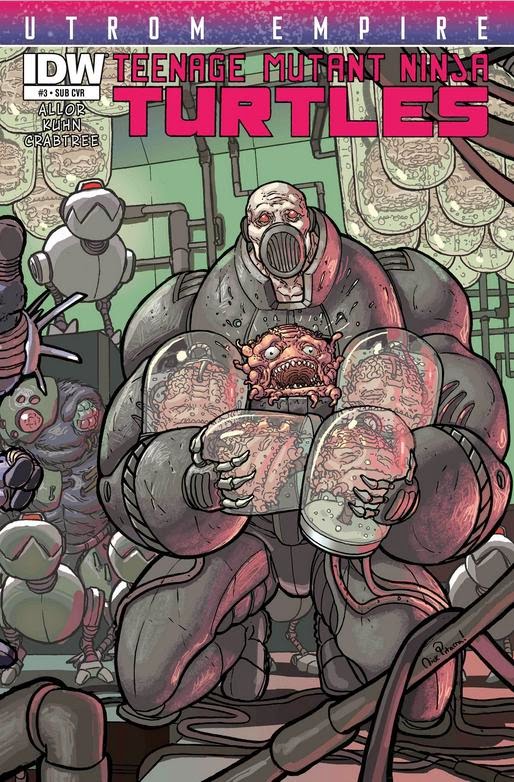 Years ago on Utrominon.  Lorqa and other Utrom scientists are holed up in a secret underground lab, making the last of the preparations under General Krang’s orders.  A messenger hurries in with a communiqué from Krang, who thanks the scientists for their diligent work and assures them that this is the only way to save their race.  He regrets to inform them that they’ve lost the war against the rebels and that Utrominon is no longer theirs. 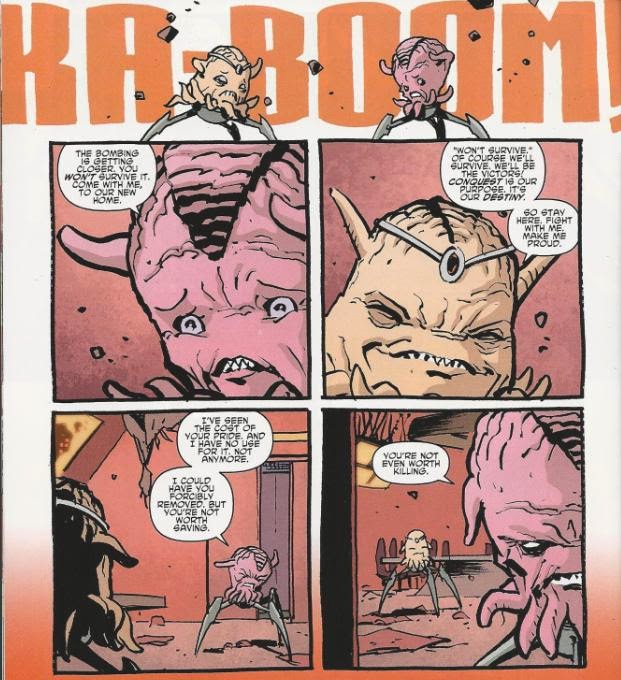 As Triceratons, Neutrinos and other aliens slaughter platoons of Utrom warriors, Krang takes a ship to visit his father, Emperor Quanin.  Krang tells Quanin that they’ve lost the war, and even if there hadn’t been a war, his father’s lust for expansion would have destroyed their planet’s resources anyway.  Krang informs him that he’s been working in secret to use the last of Utrominon’s ooze to hold his surviving people in stasis so that they can start over on the planet Earth.  Quanin scoffs, recalling Krang’s failure to gain a foothold on that planet centuries ago.  Krang reminds him that back then, he attempted to seize the planet by making alliances, but this time he’ll simply conquer it outright.  Quanin, in a delusional state, tells Krang that he’s certain the war isn’t over and asks him to stay behind and fight.  Krang abandons his father, regarding him with disgust and pity.  Krang leaves the building as rebel ships begin concentrating fire on it.

The present on Burnow Island.  Baxter Stockman burns his Flyborg and throws a tantrum, fearing that his years of subterfuge and planning have all come to nothing.

As the power comes back on, the Fugitoid considers he might still escape outside and kill himself, taking his data with him.  He considers, though, the evil of the two men he’d be leaving behind and decides that he can’t take the easy way out.  Hastily, he sends out a message on a computer before one of the Rock Soldiers grabs him and straps him back down on the dissection table he escaped from. 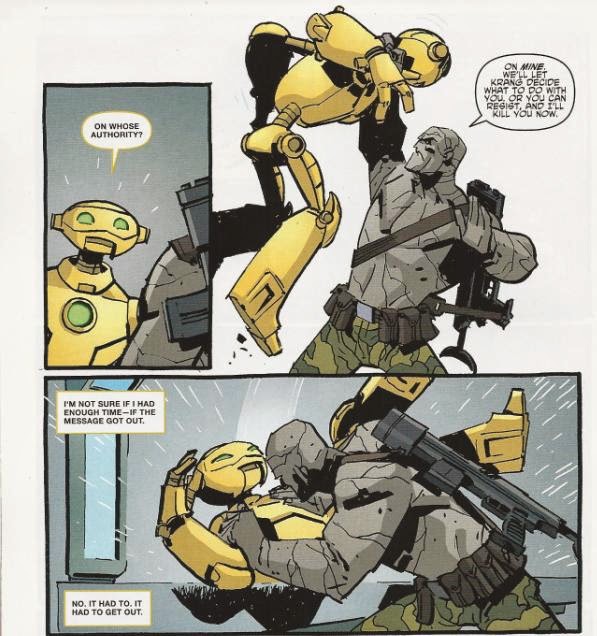 Krang comes to and stomps back inside.  Entering the ooze chamber, he tells all the Neutrino scientists to leave and collapses beside his Utrom brothers in stasis, all of whom just barely survived the power outage.

The past.  Krang reconvenes in the secret lab.  Lorqa regrets that Quanin couldn’t be swayed, but Krang insists he’d have been a liability, anyway.  Lorqa and the other scientists enter their ooze pods and go into stasis.  Krang vows that after he takes control of the Earth, he will revive them and restore their race.  An interdimensional portal opens and Neutrino soldiers begin transporting the Utrom pods to a base on Burnow Island.

The present.  Krang awakens and vows that he will fulfill his promise soon.

Northampton.  Donatello storms out of the barn, feeling like he and his brothers are up against impossible odds.  They’re only four ninja against an army bent on conquering the world.  Raphael assures him that whatever the stakes, they’ll rally and fight.

Burnow Island.  Baxter is putting together a new Flyborg, designed to seek out the escaped Fugitoid and kill him before he can expose his betrayal.  A Neutrino scientist enters the lab and informs him that the Fugitoid has been recaptured.  Grabbing a gun, Baxter rushes to the lab to eliminate the helpless Fugitoid.

He opens the door to find the Fugitoid free from his table and chatting it up with General Krang.  The Fugitoid tells Baxter that he was just informing the General about how Baxter had helped him get the ooze flow functioning again once the power was restored.  Krang congratulates Baxter on his good work and dismisses him.  Baxter storms out, furious, now realizing that the Fugitoid has leverage over him.

The Fugitoid tells Krang that he’s sick of fighting and simply wants to survive.  He’s lying, but Krang seems to buy it, offering a more mutual partnership. 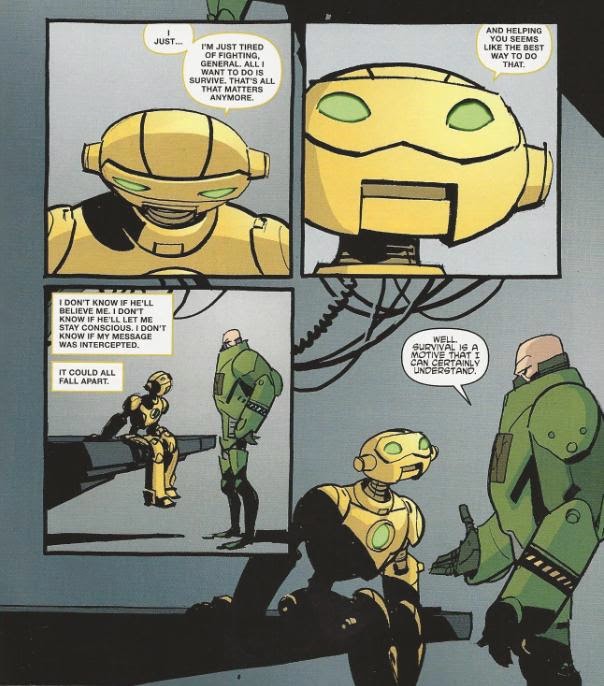 On the highway leaving Northampton, Donnie gets a message on his tablet or whatever that is from the Fugitoid.  It’s a schematic for a functioning teleporter which can reach Burnow Island.  The message has been sent to other parties and Don realizes that they’ll all have to work together in order to stop Krang and save the Earth.

*This story is continued from TMNT: Utrom Empire #2.

*The Turtles’ side of the story takes place at two different points during the “Northampton” story arc.  Page 15 occurs before TMNT (IDW) #31 (or possibly during).  Pages 20-22 occur after TMNT (IDW) #32.

*As the Iron Demon, General Krang attempted to form an alliance with Oroku Saki and Kitsune, and was double-crossed, in The Secret History of the Foot Clan #4.

*The fate of Quanin after Krang abandoned him was revealed back in TMNT (IDW) #14 and TMNT (IDW) #18.  It didn't end well for him.

*This issue was originally published with 2 variant covers: Regular Cover by Kuhn and Daniel “Pez” Lopez, and Subscription Cover by Nick Pitarra, “Greg” and “Fake Peter” (are people embarrassed to be credited with their real names anymore or is this sort of DeviantArt username stuff just “trendy” right now?).

Alright, so this review was late because Diamond shorted my local comic shop on their IDW subscriptions AGAIN.  This seems to happen a lot, not that Diamond cares; they have a somehow-completely-legal monopoly on direct market comics distribution.  My shop owner said Diamond wouldn’t fulfill his reorders for two weeks.

My thanks to all the fans willing to hook me up so I wouldn’t get left in the dust.  However, I figured I should go a more legit route.  Since I write for the review site Adventures in Poor Taste, I have access to the review PDFs that they get direct from IDW, so I read the issue that way.  When I buy the comic in two fucking weeks, I’ll upload select panel scans (review PDF pages have watermarks on them). (EDIT FROM THE FUTURE: Images added)

Anyway, Utrom Empire was pretty great, wasn’t it?  I mean, the whole thing was just a superb arc with some of the best world building I’ve seen in any TMNT universe.

If you’ve read my reviews for the early issues of Archie’s TMNT Adventures or the first two seasons of the Fred Wolf TMNT cartoon, I tended to make the same observation.  I felt there was an entirely different story going on in Dimension X, with Krang and his Rock Soldiers battling the Neutrinos and trying to conquer that galaxy, but those comics and cartoons never developed it in depth.  Probably because those stories were written for little kids, but also because it would distract from the Teenage Mutant Ninja Turtles, who are the stars of the show.  There was so much fascinating potential in there, but we never got to see it in full.  The impression I always received was that Earth was just one small drop in the bucket for Krang, who was out to conquer entire DIMENSIONS.  There was a big picture going on, and we were only seeing a fraction of it.

Paul Allor’s Utrom Empire miniseries is that big picture we only glimpsed in older Turtle media.  It’s all about Krang, his rise to power, the war in Dimension X and all the milestone events that led up to his empire’s eventual downfall.  It’s all that… STUFF I always wanted to see, but children’s cartoon and comic writers from the ‘80s never felt inspired to cultivate.

I talked last issue about how much development this miniseries has given Krang, so I don’t want to bore everyone by repeating the same praise.  But one moment in this issue really stood out to me.  When the Fugitoid is considering making his suicide attempt, he thinks about the two villains he’d be leaving behind.  He very briefly appraises their character and comes to the conclusion that General Krang, the genocidal alien warlord who slaughtered his family, is only a “misguided evil”.  Meanwhile, the very human Baxter Stockman ranks as “purely evil”.

It’s not exactly a surprising appraisal, since it’s completely organic to the story and everything we’ve witnessed up until now, but look back at the start of the series.  General Krang was the ominous villain intimidating, threatening and enslaving Baxter to his whims.  On face value, Baxter was no saint, but he was certainly the lesser evil of the pair.  But now that we’ve gotten to see the whole story, Krang at least operates out of a sense of loss and a desire to help his own people whom he genuinely cares for.  Baxter?  He is motivated entirely by greed and self-interest and with no warped altruism to speak of.  Baxter really is the more villainous personality.

At only 3 issues Utrom Empire may seem rather light on the surface, but the miniseries is just packed with story.  It’s a very meaty 3 issues.  I do wonder if they'll throw anything extra in the trade paperback to give it more heft. (EDIT FROM THE FUTURE: They end up including a reprint of Fugitoid #1 as bonus content.)

Utrom Empire was a great companion to “Northampton”, using the ongoing’s laidback “breather” arc as an opportunity to establish an epic, science fiction-themed storyline on the side.  Much like how “Secret History of the Foot Clan” and “Krang War” ran side-by-side, it was a wise editorial choice to run these two arcs simultaneously so fans could get a little of everything.

Grade: A (as in, “And oh, by the way, the Iron Demon was Krang.  I liked how they kept the Demon’s identity up in the air for over a year and then just casually revealed it as a brief aside”.)