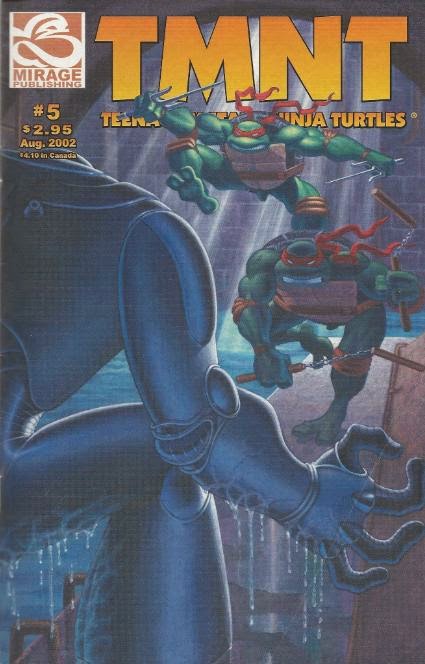 Down in the sewer, Mike and Raph attack the giant robot, which protests for them to desist.  It absorbs their weapons into its liquid metal body and then shrinks down, revealing itself to be the Fugitoid.  The Fugitoid explains that he got lost in the sewers looking for his old friends.  Mike is happy to see the Professor, but Raph is irritated and shoves him into the storm drain water. 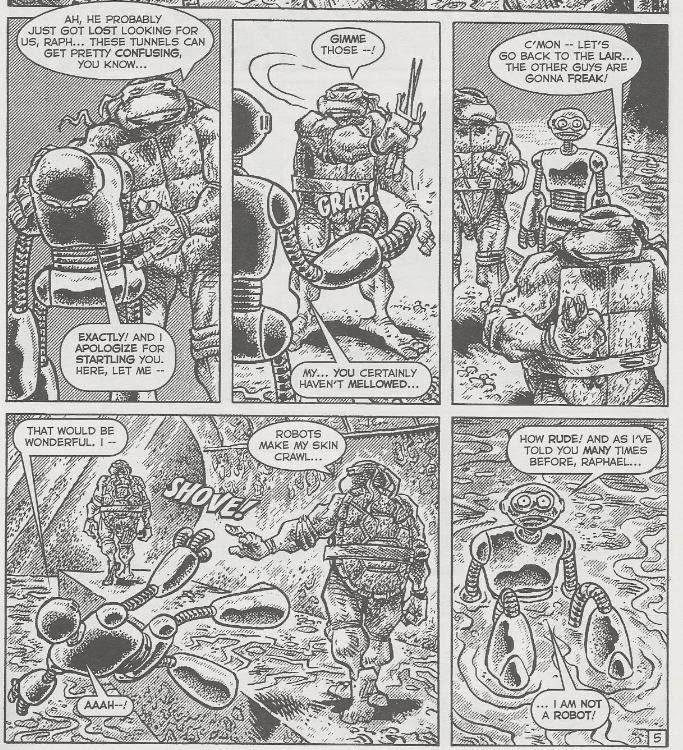 In New York harbor, near the Utrom island, the Coast Guard shoos some rowdy drunks and their fishing boat away from the restricted area.  They then watch an Utrom “tug” float out from the island and toward the United Nations building, where Ambassador Korobon will be giving an address to the Earth that evening.

At her apartment, April is stressing over the news she got from the doctor; wondering if she should give up on trying to have a baby.  Casey tells her to try and forget about her worries for one evening and relax, as they’re about to watch the biggest event in recorded history on television.

Down in the lair, Mike reintroduces Don and Leo to the Fugitoid.  The Professor says he came with the Utroms and has been involved in First Contact.  However, he’ll discuss the details with them later, as the address from Ambassador Korobon is about to begin.

At the UN building, Korobon addresses the general assembly.  He informs the World that the Utroms come not as invaders, but as visitors.  There are numerous intelligent cultures all over the galaxy and he would like to invite Earth to be a part of that network.  The Utrom island in New York Harbor has a functioning transmat which can act as a processing station for incoming and outgoing lifeforms.  He says that ultimately, it is up to the governments of Earth to decide amongst themselves whether they would like to join this intergalactic network, as he will not force anything upon them.  Korobon issues a deadline of one year to decide.  If the governments of Earth should reject his offer, the Utroms will pack up and leave the planet and not renew the offer for another century. 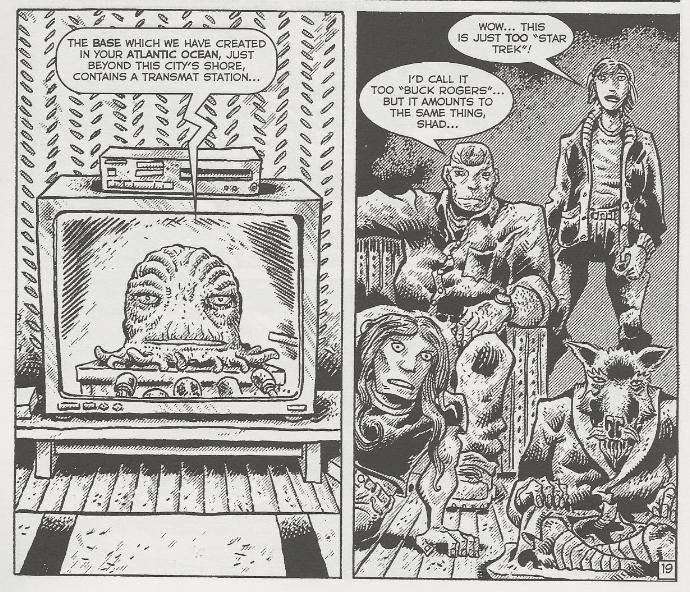 All over the world, people watch and react to Korobon’s message.  In Northampton, Shadow wonders if the Utroms can be trusted, as they look a little scary.  Splinter recalls his first encounter with them, and how unpleasant it was, but reveals that he came to understand the aliens as gentle and honest.  In New York, the Madhattan Maulitia watches and in a fury, they shoot the TV, swearing that Earth is for Earthlings.  And at Foot HQ, Karai silently watches the address with a calculating look on her face.

Six months pass by.  In that span of time, many governments battle over how to handle the offer from the Utroms.  Cults spring up around the aliens while established religions struggle to revise their scripture to account for the existence of extraterrestrials.  Other aliens beside the Utroms arrive via the transmat and begin assimilating into Earth society, walking the streets alongside humanity.  It is a time of chaos and upheaval, but ultimately the decision is made to accept the offer.

April, Casey and Shadow are on a ship heading toward the Utrom island.  It had been a long wait to have their applications as guests approved, but they can’t wait to see the place up close.  Casey is ticked that the Turtles couldn’t pull any strings to get them in sooner, as the Turtles have been hanging with the Utroms since they first arrived six months ago, but rules are rules. 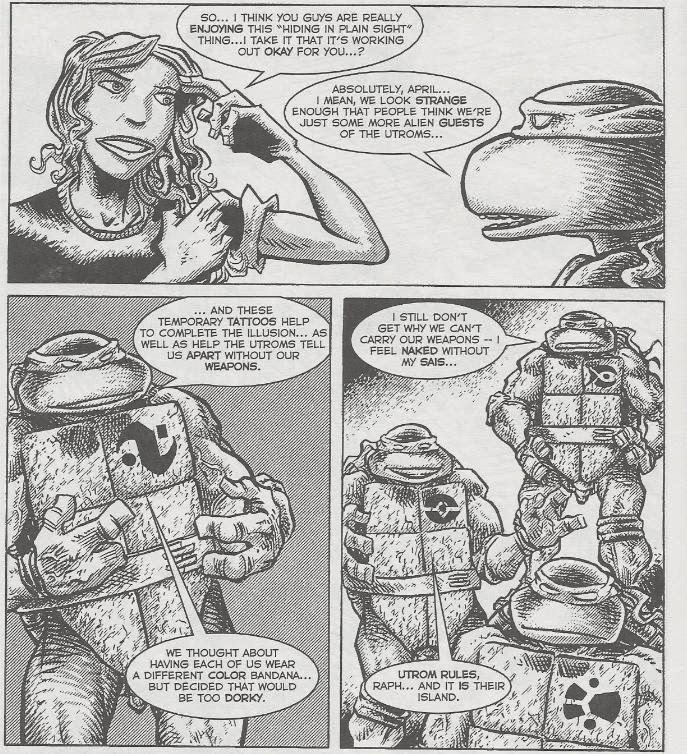 Speaking of the Turtles, they zoom up as the ship docks on some alien jet skis to greet the Joneses.  April thinks they’ve adapted well to life out in the open; with the presence of aliens on Earth, the Turtles can now walk the streets in broad daylight and amongst humans.  They’ve been enjoying helping the Utroms in their work, though they’ve had to adopt symbol badges on their plastrons so the aliens can tell them apart without their weapons.

As they head toward the metal detector, Casey notices Foot Soldiers standing sentry.  Raph explains that the Foot Clan won the contract to act as security for the island primarily because the Utroms have a strict “no weapons” policy and the Foot are the best at unarmed combat.  As April walks through the detector, the security alarm goes off, claiming she has weapons on her person.  The Foot Soldiers swarm the entrance in an attempt to get to April and detain her.  The Turtles and Casey stand between them, ready to fight.

*The Turtles last met the Fugitoid in the short story “Terror by Transmat!”.

*Splinter recalls his first unpleasant encounter with the Utroms from TMNT (Vol. 1) #3.

*Numerous issues of Tales of the TMNT (Vol. 2) take place, or potentially take place, within the six month time gap present in this issue.  For a comprehensive listing of issues that fill that void (they were busy for those months), see my Mirage Comics Continuity Timeline.

*If the Volume 4 storyline began in January of 2002, then the storyline after the time skip picks up in June of 2002.  You know... for those of you who like to keep track.

*Most vital of the stories taking place during the missing six months, however, was the miniseries Michelangelo: The Third Kind, which covers humanity’s acceptance of the Utroms and extraterrestrials.

This was the most exciting moment in Volume 4, I think, and a heck of a way to essentially start out the series.  In his very first narrative arc, Laird completely turns over the status quo that had been enforced since 1984 and there was a MAJOR change for the characters.  We’re only five issues in and it already feels like things are going to be very different, imbuing the genuine sensation that this won’t be a stagnating storyline; the characters and their world are truly going to grow and change in dynamic ways.

Well, time would only tell on that one.  While I don’t think the characters grew and changed all the much across Volume 4 (well, physically they did, yeah, but that’s not what I mean), I do feel that the situations and the world they found themselves in became vastly different.  First Contact opened up the world in new ways for the Turtles and suddenly they could walk the streets in broad daylight, talk to other people and generally say good bye to the slinking through the shadows bit.  That era is behind us, now.

Some people were critical of this; it was a colossal change in the status quo.  But a status quo can be a terrible thing for characters and I’m happy to see Laird decided it was long past time to completely change things for them.  It freshened up the storytelling and, for all the folks still demanding “Turtles in hiding” stories, Tales Volume 2 would come around with issues taking place in those earlier years.  So even readers not happy with this bold direction still had options.

One running gag in this issue you might notice is that Laird takes a few jabs at the old Fred Wolf TMNT or just the “merchandising Turtles” in general.  On page 26, Michelangelo yells, “Cowabundolo” and Raph tells him to shut up.  The gag being that Mike can’t even remember his cartoon catchphrase and Raph thinks the whole gimmick is stupid.  A few pages later, Mikey explains the unique badge symbols the Utroms gave them so they could be told apart.  Mikey continues, “We thought about having each of us wear a different color bandana… But decided that would be too dorky.”

What I find funny about those jabs is that they came at a point in the Volume 4 narrative when the Mirage Turtles were inadvertently becoming more like the Fred Wolf TMNT.  They could now walk the streets in broad daylight just as they always did in the old ‘80s cartoon.  They were becoming accepted by mainstream society as something “neat” and “cool”, an almost metatextual simile to how the Turtles went from indie comics characters to pop culture superstars.  And all these jabs at the old “merchandising Turtles” came right as they roared onto the scene in Hi-Tech Utrom Jet Skis, available this Christmas from Playmates wherever toys are sold.

I’d like to think Laird wasn’t that dense; that he could see that these changes in the status quo were making the Mirage Turtles more like the “merchandising Turtles”, so he opted to put a subtle lampshade on the whole thing.  Or maybe he was completely oblivious and cluelessly threw in the “dur hur, cartoon Turtles were dumb” gags at the same time he was making them more like the cartoon Turtles.  I dunno, but three paragraphs is enough time to spend on this shit.

The six month storytelling gap would be brutally abused by Tales Volume 2 as a means to slip in stories where the Turtles team up with the Utroms for various outer space adventures.  Volume 4 is very densely paced and there aren’t a lot of breaks in the narrative for Tales stories to slip in.  So that six month gap wound up retroactively getting a LOT of material.  The Turtles were very, very busy in that half-year, apparently.

Putting that storytelling gap between pages 23 and 24 of this issue was an odd choice, but like I said a few reviews back, Volume 4 isn’t paced like normal comics.  The issues end when Laird decides he’s done writing, not when there’s a clean break in the storytelling.  So all of a sudden its six months later and we’re jumping into the next arc about April’s ovaries and then BOOM.  To be continued.  Yeah, okay.

If there was one downside to this establishing First Contact arc, it’s that the Turtles spend the first five issues of their own book as casual observers to something going on around them.  I mentioned in my last review that I was okay with that, and yes *I* was okay with that.  Other people might get kind of bored just watching the Turtles sitting in front of the TV for so long.  But all that is behind us and the Turtles are about to get more proactive now that the new status quo has been laid on the table.  Essentially, next issue is when Volume 4 actually gets started.