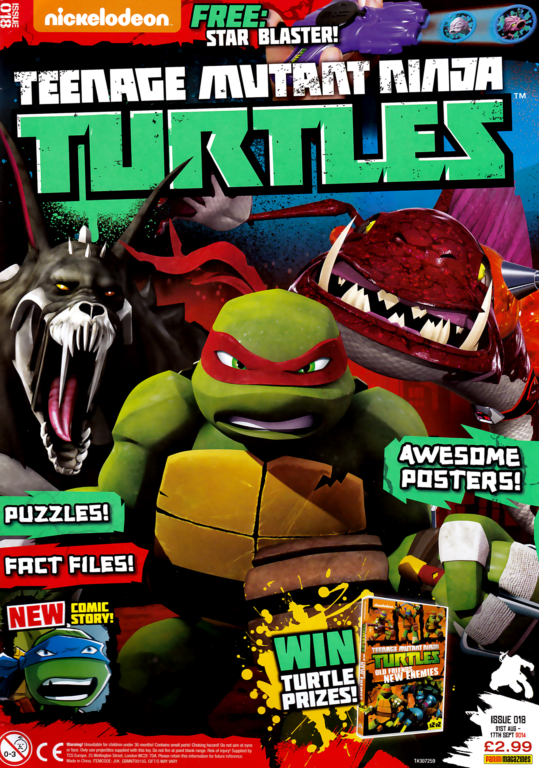 The Turtles are on a rooftop training run when suddenly Raph gets hit in the neck with a dart.  He isn’t feeling sick so he isn’t sure of the purpose of the dart… until he starts incessantly babbling his feelings to his brothers.  Much to his embarrassment, he’s been hit with a truth serum.  Fishface and Rahzar then reveal themselves, alongside a unit of Footbots, happy with their work.  The Turtles don’t see their motivation for this scheme, at least until Rahzar asks Raph where their secret lair is. 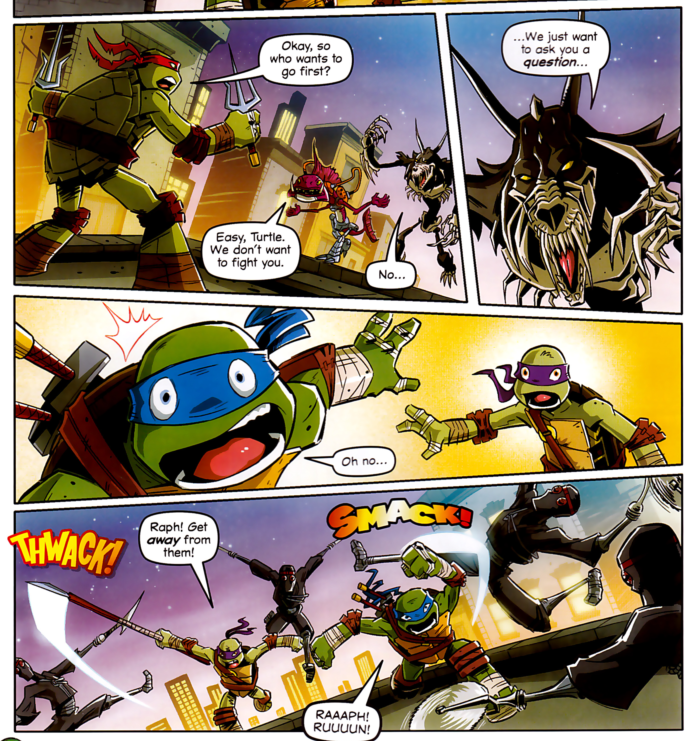 Before Raph can blurt out the answer, Leo muffles his mouth and then orders him to go back to the lair while they take down the Footbots.  Raph hoofs it, but Fishface and Rahzar catch a ride with some Foot Bikers and chase after him.  They corner him alone and ask him once again where the lair is.  Raph is about to spill the beans when the Turtles show up riding the Foot motorcycles.  They scoop Raph up, but before they leave, they nail Fishface with his own dart.

Back at the lair, Don reveals that the serum will eventually wear off.  The Turtles are in no hurry as they ask Raph a string of embarrassing questions he has no choice but to answer truthfully. 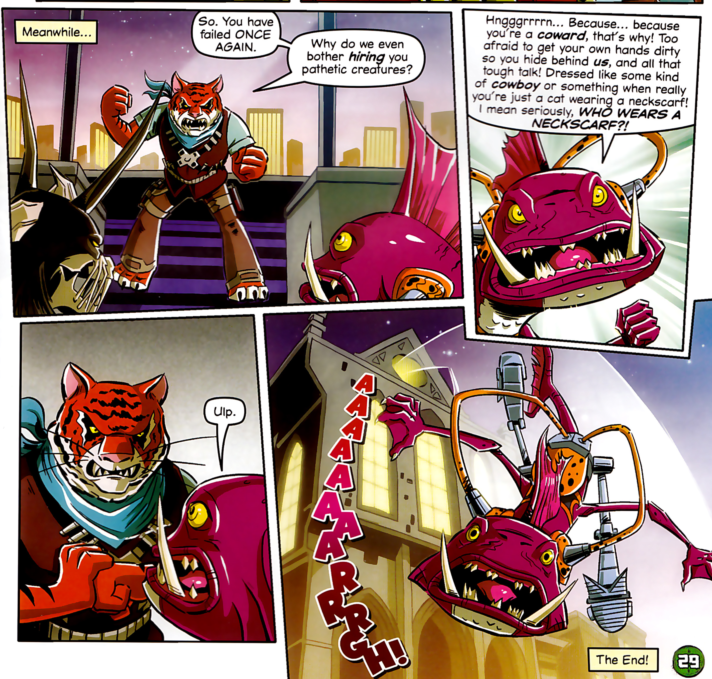 At Foot HQ, Tiger Claw scolds the hench-mutants for their failure.  Enraged, Fishface accidentally blurts out the truth, insulting Tiger Claw’s scarf.  The cat mutant angrily hurls him out the window for his offense.

*Tiger Claw has two eyes in this story.  Unless this issue takes place between "The Manhattan Project" parts 1 and 2 (which is unlikely), then his two-eyed status would be a continuity error.

This was one of Caruana’s best scripts.  It was really tightly paced and really, really funny.  It’s a simple plot, but he gets a lot of comedic value out of it, especially as Raph tries to keep himself from telling the truth and the bad guys find ways to outsmart him.  The best bit was when Raph plugs his ears so he can’t hear the question, eliciting Fishface to write it down on a cue card.

Even more great art and coloring from the team of Molesworth and Nicholson/Cardy/Stayte, too.  Normally, I hate it when a comic has a TEAM of colorists working on it, as it tends to overshadow the pencils, but they all work together seamlessly and the end result is a very cool-looking comic.

Funny, I just read this comic at the same time as IDW’s TMNT New Animated Adventures #17 and in both these issues, Tiger Claw has two eyes.  He didn’t have two eyes for very long in the cartoon and didn’t leave enough time for stories like this to occur.

Anyway, they’ve started collecting these Panini TMNT Magazine comics in trade paperback form, but they’re only available in the UK.  I would highly, HIGHLY recommend you take on the expense of importing them (Amazon UK isn’t so bad).  They’re, quite honestly, the better of the two comics based on the Nickelodeon cartoon.

Grade: A (as in, “Although he’s still a chump, it’s still nice to see Fishface every once and a while”.)