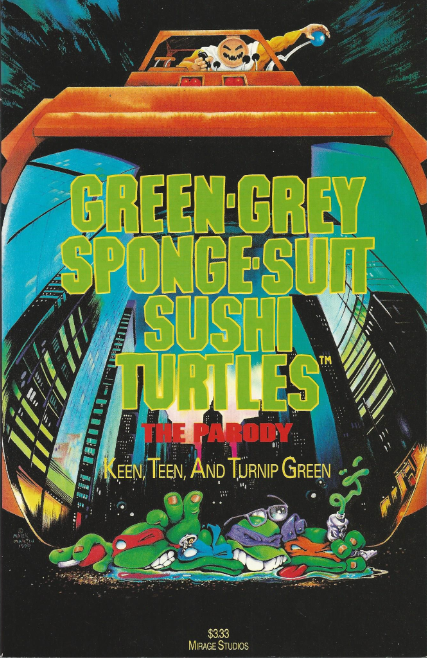 Action News reporter April Mayjune talks about the violent cult surrounding the current Batguy fad: teenagers turning into hoodlums in costumes emulating their pop culture icon.  She signs off and says good bye to Dan-Dan (son of her boss, Mr. Pennyworth) but is attacked in the parking lot by the Batguy clan.  She’s “rescued” by the Green-Grey Sponge-Suit Sushi Turtles, but they lose the fight and get dumped in the sewers.  Meanwhile, Dan-Dan runs away from home because his rich father doesn’t tough-love him. 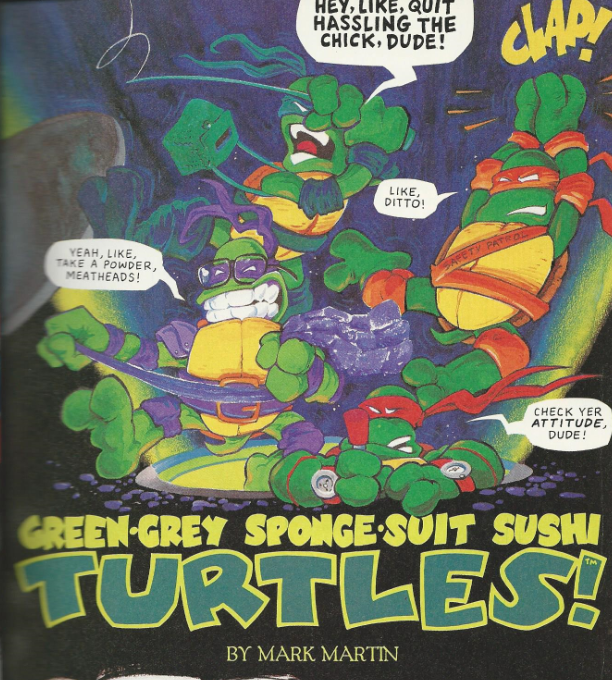 Perrier, incidentally, storms off to go see a movie, but all they’re playing is “Batguy”.  He starts badmouthing Batguy and gets attacked by more Batguy clan members.  He’s saved by masked vigilante Kootie, a hardcore fan of the “real” Sushi Turtles who wishes they’d go back to their roots as dark and gritty indie comics characters.

Back in the lair, Match-Stik tells April their origin.  He was the pet rat of master chef Sushi and would mimic his tray arrangement skills from his cage.  When Sushi came to America, Match-Stik found himself all alone.  One day, he noticed Seymour feeding his blood to Audrey II from “Little Shop of Horrors” and when the plant spit the blood back up, it got on him and four turtles.  They all became intelligent and mutated, so he decided to teach them all he knew and they moved into the sewers below the Popeel TV marketing building.  Using the resources they found there, they became mass marketing sensations.

Elsewhere, second in command of the Batguy clan, Shih Tzu, kills an effeminate member of the clan named Home Bo for failing him.  Dan-Dan sees this and is horrified.  Shih Tzu then reports to his boss, the Shooter (a guy with a salad shooter on his head) and receives his orders to kill April Mayjune before she can investigate any further into the Batguy clan.

Perrier then comes home with Kootie still clinging to his back, making fan demands (like no more guest issues in the black and white comics).  Perrier drops a bookshelf on himself and is gravely injured.  Suddenly, the Batguy clan invades the lair and the Turtles and April flee with Viceroy grabbing Match-Stik (who was injured by a loaf of whale tongue).  When they get into April’s van, though, they discover that Viceroy grabbed Kootie by mistake.

At the Peter Warehouse on Kevin Island, Shih Tzu is torturing Match-Stik by making him listen to Prince’s soundtrack for the Batguy movie. 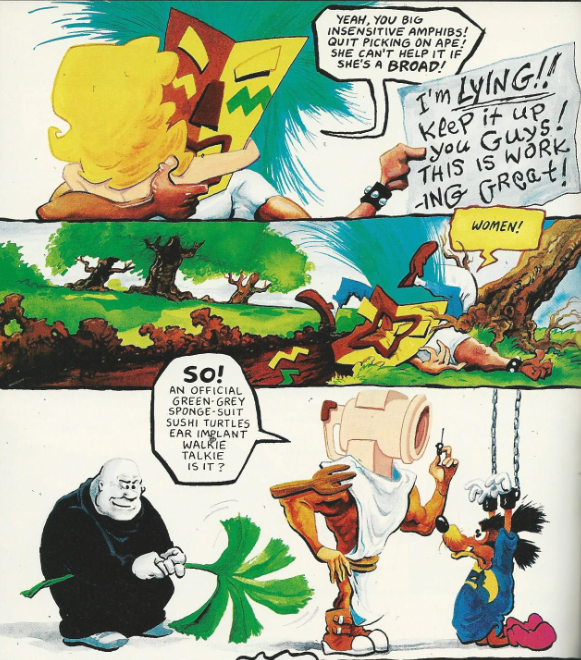 The heroes retreat to the Mayjune farmhouse upstate and Kootie tries to put the moves on April only to be smacked.  April decides to adapt this melodrama into a sitcom pitch and writes the theme song.  Apparently, Toyoduh won’t leave Perrier’s side until he recovers, Viceroy and Kootie are trying to turn her van into a Party Wagon to improve toy sales and Velveeduh has just received a psychic message from Match-Stik (actually, they’re communicating via their official Sushi Turtles walkie talkies).  Match-Stik tells them where to find him, though Shih Tzu and Shooter find the walkie talkie receiver and set a trap.

Still waiting to be rescued, Match-Stik tells the rest of his origin to Dan-Dan.  So basically, Sushi and Oroku Noogy were competing sushi chefs in Japan trying to get a perfect review from food critic Tang Jar.  When Sushi slept his way to a good review, Noogy tried to kill him but failed and was killed himself.  Tang Jar and Sushi fled to America, but Noogy’s brother, Oroku Soggy, swore vengeance.  He formed the Batguy clan to try and make raw bat sushi seem more appealing, but when Tang Jar rejected the dish, he killed her and Sushi.

Anyway, before the Sushi Turtles can arrive, they decide that the only way to beat the Batguy clan is to find their roots as grim and gritty underground comic book characters.  April makes them some darker costumes and they go to the Peter Warehouse on Kevin Island.  The Batguy clan attacks, but when the Turtles mention that Wheel of Fortune is on, they all clear out. 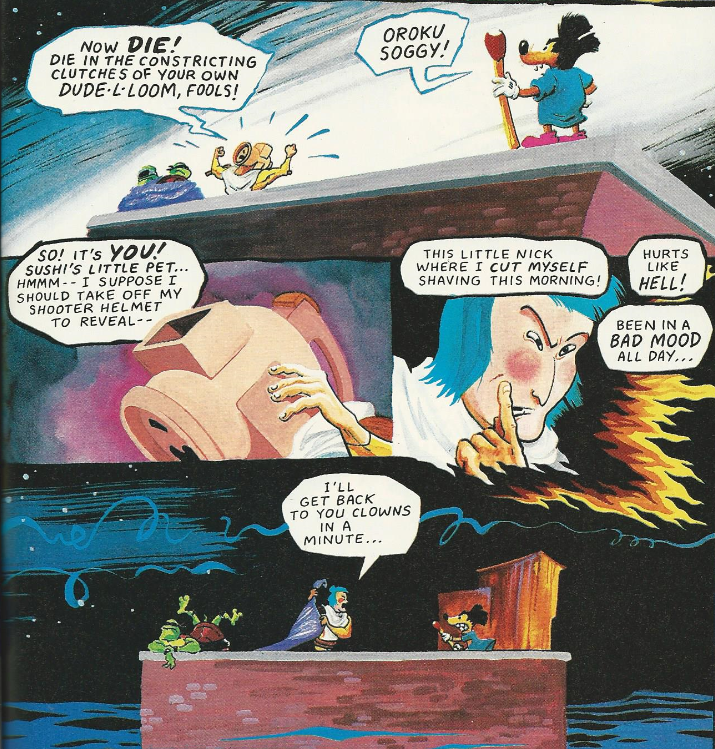 The Shooter and the Sushi Turtles do battle on the roof of the warehouse, but the Turtles ultimately lose, getting tied up in Toyoduh’s own loomed scarf.  Match-Stik shows up and tricks the Shooter (who removes his helmet to reveal that he’s Oroku Soggy) into getting tangled in the scarf.  The scarf then gets caught in his salad shooter helmet and Soggy is eviscerated.  Kootie then pulls up in his dump truck and takes off his mask.  When April sees how handsome he is, she finally falls for him.

Later, April pitches her sitcom to a TV exec who laughs it off until he sees the Sushi Turtles in person.  He mentions that his nephew loves their cereal.

Epilogue, Dan-Dan reconciles with his father, but now being a mature adult, he asks that he be called Dan-Dan-Dan from now on.

*The story continues in “Toyoduh in The Naked City”.

*This is “the official, authorized parody” of TMNT: The Movie (or the comic adaptation, anyway).

Much like Bob Burden’s Flaming Carrot crossovers, this thing reads like a game of Mad Libs; stream of consciousness ran-dumb nonsense substituting for anything even remotely clever... substituting for JOKES, in fact.  It’s just a long, boring string of non sequiturs and I really had to fucking struggle to make it to the end of this book.  And I thought I’d never get there.

Mark Martin is a great artist and a great visual storyteller, but his writing can be some of the worst in the TMNT comics.  Tell me, does THIS sound like a joke to you?  “The purple wonton from planet Microwave invaded Pittsburgh to steal all its naval lint only to be thwarted by the dog from Frasier who fought back using a pogo stick made of Elmer’s glue, the end.”

Because that’s what this comic reads like; what MOST of Martin’s comics read like.  Nothing but dull “randomness” and pop culture references.  Maybe in a 22-page package it might be digestible, but in a 48-page graphic novel that shit is just exasperating.

When it comes to Martin, I’ve only ever read his TMNT-related work, but he seems to really have a hard-on for Batman.  His guest issue featuring Gnatrat was all a bad Dark Knight Returns parody and now this comic is inexplicably a commentary on the resurgence of Bat-Mania that was sweeping the nation thanks to the Tim Burton movie.  The “Batguy” fans are pitted against the Turtles mainly because, as Martin saw it, Batman was unseating TMNT as the current children’s media and pop culture juggernaut and so that seemed like some very contemporary commentary.

There’s kind of a neat observation buried in there.  “Batguy” was gaining in popularity because the new movie had “restored” the franchise to its dark and gritty roots while the “Sushi Turtles” were waning in popularity because the merchandising and children’s cartoons had robbed the brand of its dark and gritty roots.  A cute thing to point out, but again, not for 48 freakin’ pages.  It’s this one observation, this one nugget of substance, and Martin just drags it the hell out and before the halfway mark you’re just sick of hearing him reiterate the same point.

I did kind of chuckle at “Kootie” bitching about the guest issues of the black and white comic.  So I’ll give Martin that much.

Anyway, the script and humor is positively dreadful, but as with all Mark Martin TMNT issues, the art is wonderful.  Like I said, the man is an amazing VISUAL storyteller.  His pages are bursting with manic energy and the full color (all done by Martin) is vibrant, absolutely making the art pop.  There’s a painted quality to it that’s especially nice, reminiscent of his covers on TMNT Volume 1.  It’s just… jeez, this guy can’t write or tell jokes or pace or any of that other stuff that doesn’t involve putting pencil/brush to paper.

Green-Grey Sponge-Suit Sushi Turtles is awful in every aspect save the art.  There are four more of these stories, but hopefully they’ll be a little easier to stomach as they’re all short strips.  We’ll see.  As it stands, I just can’t recommend this to anybody unless they’re already a fan of Martin’s work.

Grade: F (as in, “For what it’s worth, the one page parody of Don Martin’s black and white MAD Magazine comics was a neat aside.  Don and Mark aren’t related… are they?”)