Toyoduh in The Naked City 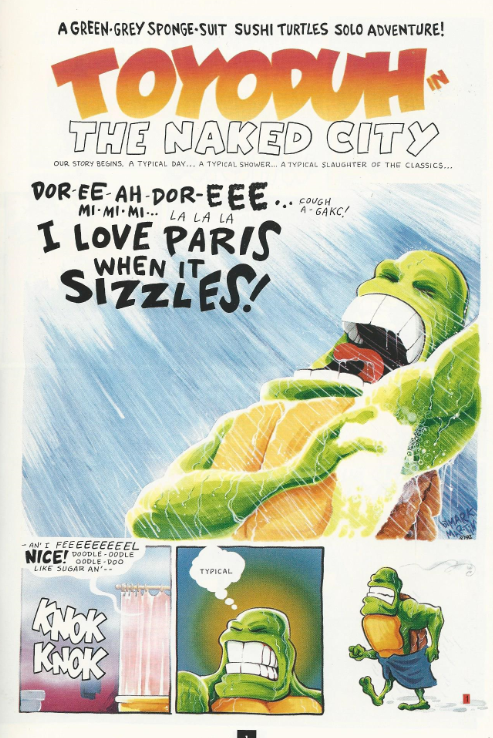 “Toyoduh in The Naked City”

Toyoduh is in the lair, taking a shower, when he hears a knock at the door.  He stumbles his way to answer it, almost completely blind without his glasses.  He opens the door to find the Shooter, disguised as a salesman, who offers him a glasses-cleaning service.  Toyoduh says he can’t even find his glasses, but the Shooter says he’s found them for him and hands him a pair of x-ray specs.  As soon as Toyoduh puts them on, though, the Shooter runs away. 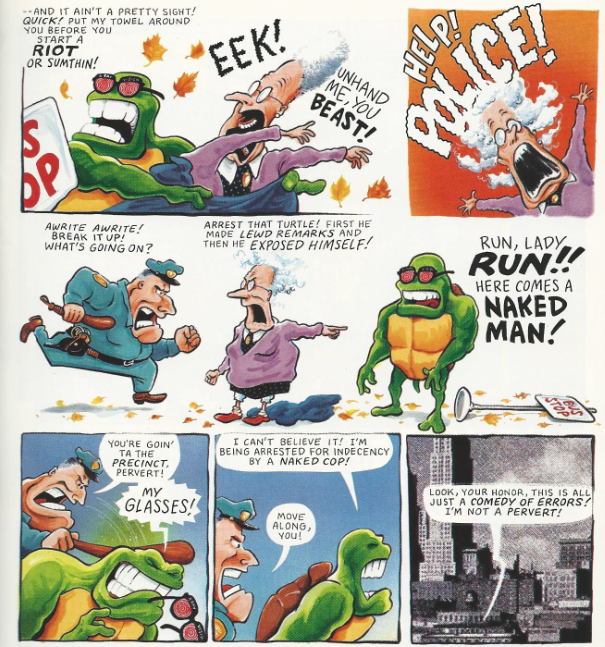 Toyoduh heads to the surface to find the “salesman”, only to see a naked old lady.  Actually, she’s fully clothed and HE’S the one that’s naked since he just got out of the shower.  The old lady screams for the police, but through the x-ray specs, all Toyoduh sees is a naked man running at him.  He resists arrest and gets bonked on the head with a nightstick and carted off to the precinct.

Toyoduh pleads his case to the judge, who turns out to be a coatrack.  The detectives on duty decide they’re sick of hearing Toyoduh talk and tell him that Merv Griffen paid his bail.  Toyoduh then heads back to the lair to finish his shower.

*This story is continued from Green-Grey Sponge-Suit Sushi Turtles: The Parody.  The story continues in “Velveeduh in The One That Got Away”.

*The table of contents in all issues of Turtle Soup list the Sushi Turtles stories by the names of the character appearing and not the full title.

I think this is the better way to enjoy Mark Martin’s stories: As short segments included as part of a larger anthology collection that spans different genres.  In that fashion, his random wackiness doesn’t overstay its welcome and drive the gimmick into the ground.  Also, when accompanied by a plethora of other stories that cover action, horror, drama and pathos, his goofy comedy angle feels more unique.  Martin’s long-form stories, be they as 50-page graphic novels or as 3-issue story arcs that span months, tend to be too much of an erratic style of storytelling which you grow numb to fairly quickly.

More than that, these short comics are just better written.  With the longer stories, Martin very clearly is trying to fill space, so the narrative gets stretched out with gratuitous nonsense and meaningless asides that serve no other purpose than to occupy 50 tedious pages.  When pigeonholed into 6 economical pages to tell a story, Martin trims the fat and focuses on structure and pacing.  The story doesn’t lose any luster because it’s “less” chaotic and random, but rather, the fact that the chaos and randomness punctuate a coherent narrative actually gives those elements emphasis.

And if you just think I’m picking on a certain style, like I have a stick up my ass about zany surrealist comedy, let’s make an example of another Turtle story that dabbled in a different genre.  “Turtle Dreams” by Steve Bissette is a great short comic that is deeply embedded in the horror genre.  But the reason it WORKS is because it’s a short strip included as part of a larger collection.  If it were nothing but 50 pages of Michelangelo getting his limbs brutally torn off, his rib cage cracked open and his organs devoured one by one, then it would be a terrible story with no substance.  But compressed down to a short narrative that trims the wheat from the chaff?  It works.

Martin’s contributions are much the same.  The Sushi Turtles, when required to star in 50 fucking pages, get old fast and the whole exercise feels tone deaf because there’s no contrast to give the wacky bullshit emphasis.  Cut down to 6 pages and as part of an anthology, though?  They’re actually pretty enjoyable.  I wouldn’t say this story was an absolute rib-tickler, but at least it read well.