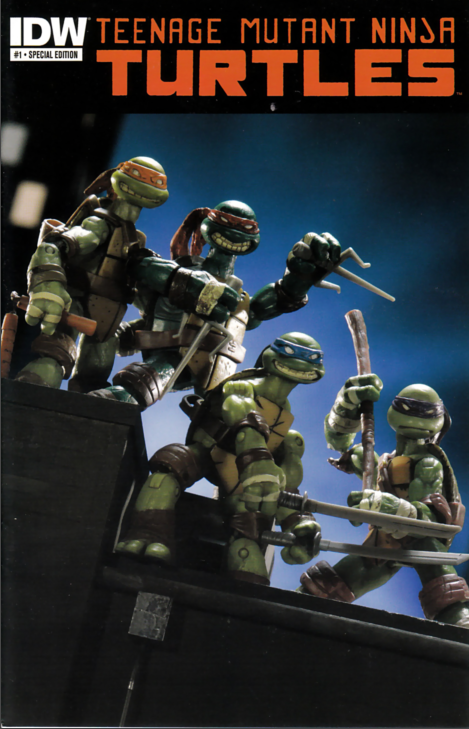 Down in the alleys of New York, the Turtles are bummed that they went their whole patrol without encountering a single Foot Soldier.  Raph suggests they liven things up and have a race back to the lair; loser does the winner’s chores!  Leonardo is against the race, as he doesn’t like the idea of them splitting up while still in Foot Clan territory, but the others veto him.  Raph speeds off in the Ninja Stealth Bike, Don makes his getaway in the Rippin’ Rider, Mikey zips off on his Sewer Spinnin’ Skateboard, and Leo reluctantly follows them in the Shellraiser. 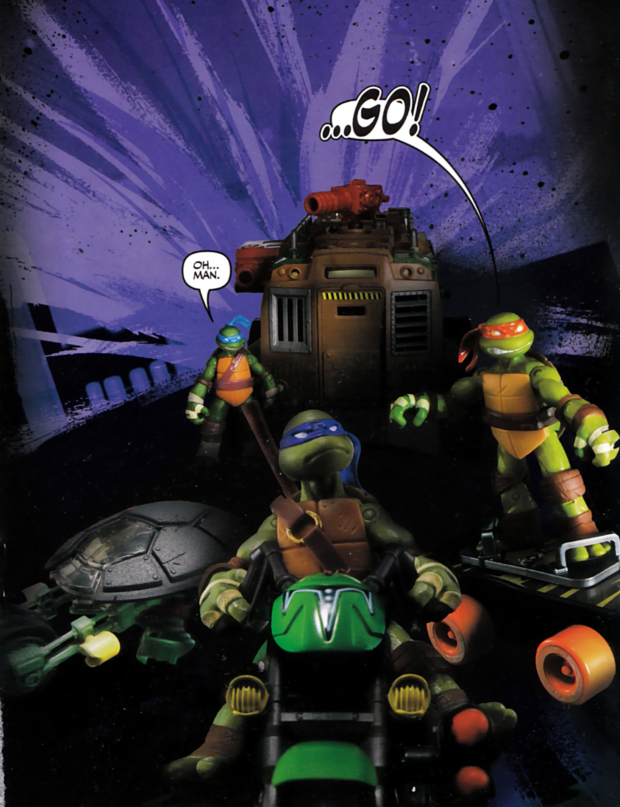 Michelangelo is the first to encounter trouble, getting ambushed by a Foot Soldier and a Foot Biker riding a Dragon Chopper.  He has trouble taking them down, at least until Leo comes to his rescue.  Once the Foot Soldiers are beaten, Mikey skates off, still determined to win the race. 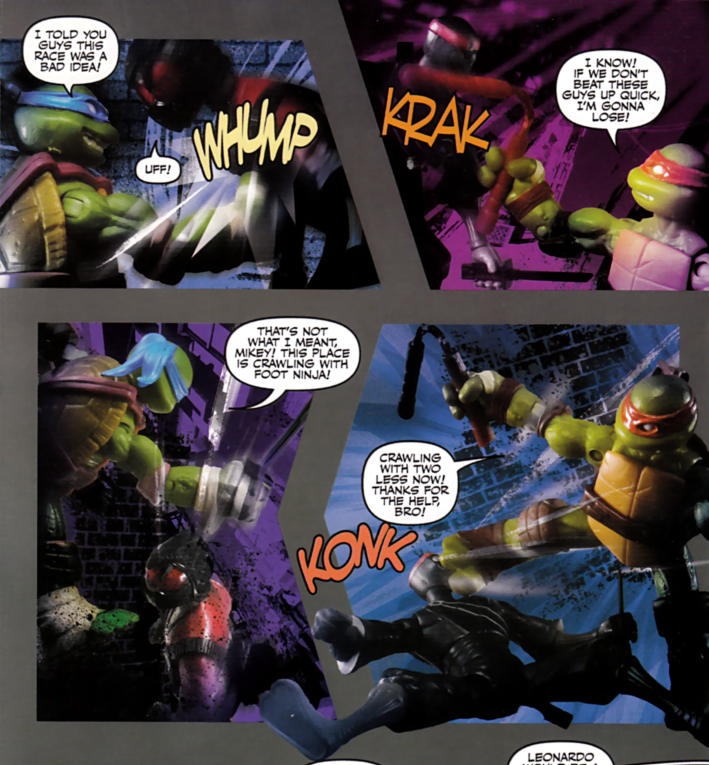 Next is Donatello, who is so preoccupied imagining how his victory will impress April that he fails to notice the Foot Soldiers bearing down on them.  Leo arrives in the Shellraiser and bails Donnie out, though the poindexter declines to follow Leo’s example and rides away, intent on winning April’s heart. 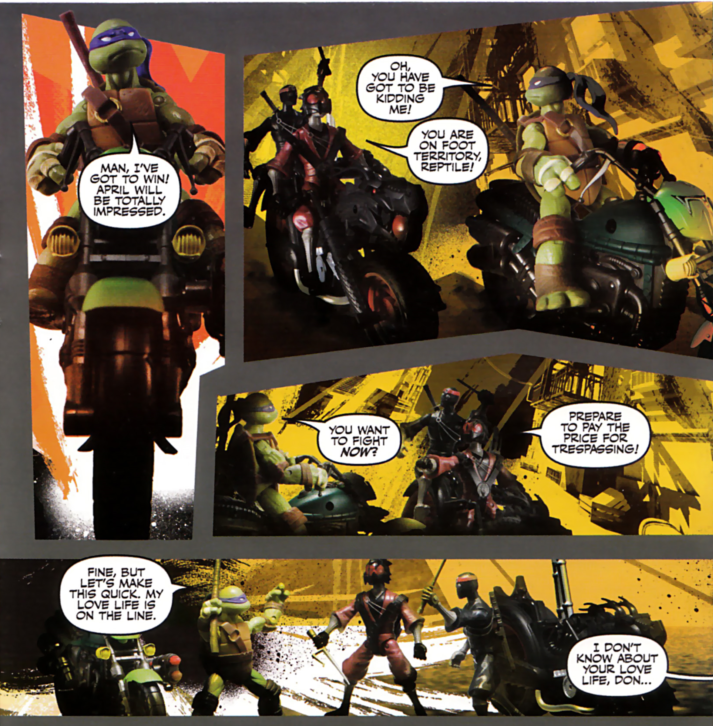 Lastly, Raphael is cornered in an alley by the Foot and immediately begins busting heads.  Leo shows up to help him, but as soon as the fight’s over, Raph abandons him to continue the race. 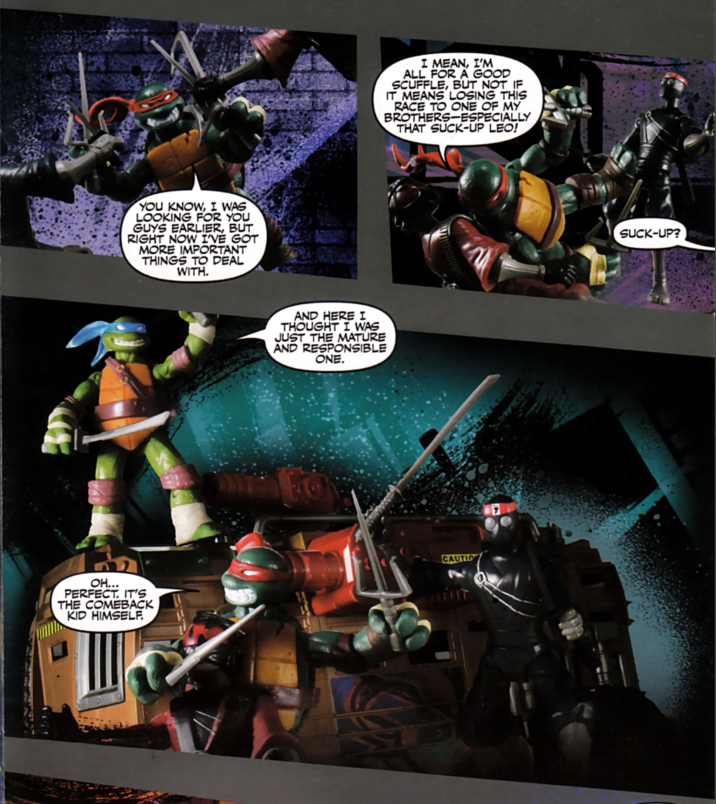 Leo begins to pout, lamenting how immature his brothers are.  However, he’s note alone, as he’s suddenly approached by the looming form of... 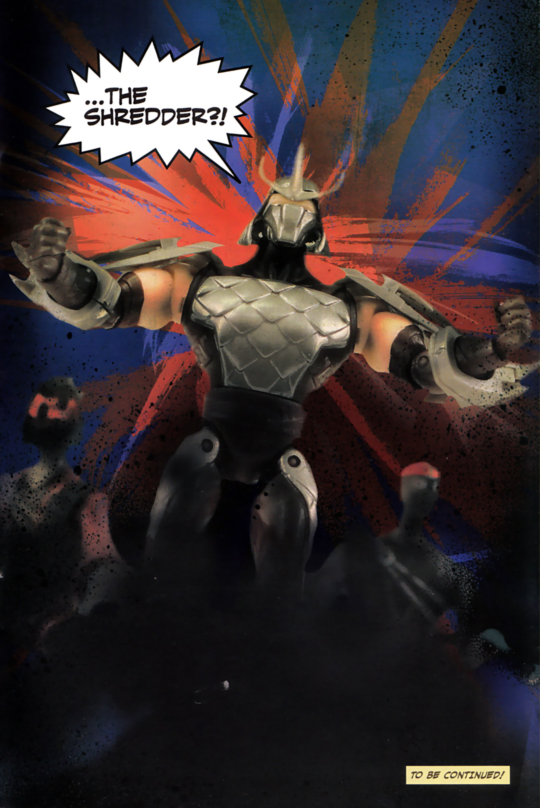 The Shredder?!  And his unflattering paint applications?!

(Continued on the Target.com website in a stop-motion animated short) 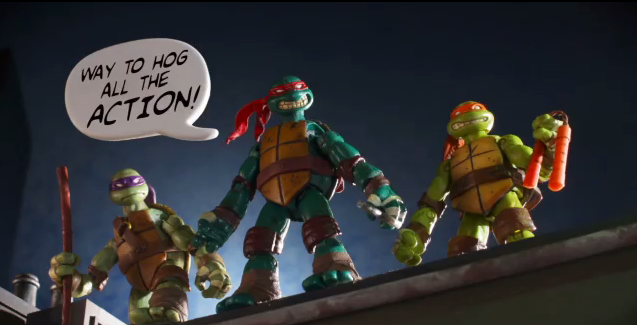 The other Turtles arrive via rooftop and swoop down in the nick of time.  They trash the Foot Soldiers and Shredder retreats via a smoke bomb, swearing revenge.

*In order to see the ending to this comic, you had to scan the code on the back or go to target.com/nickelodeon and follow the link there.

*Additionally, there was a challenge advertised at the end, telling kids to buy the toys at Target and then photograph their own ending to the story.

*This comic was available only at the 2012 San Diego Comic Con.

So thanks go out to Enscripture for sharing this comic with me.  Honestly, I knew that there was a 2012 Comic Con TMNT comic with the action figures posed for a cover photo, but I had thought it was just a reprint of TMNT (IDW) #1.  I hadn’t a clue it was entirely new content.

Not… GREAT new content, no, but it certainly serves its purposes.

Being from the first wave of toys based on the 2012 Nickelodeon TMNT cartoon, Waltz and Hayes don’t exactly have the pick of the litter to work with.  No Dogpound, Fishface or Baxter Stockman in his StockmanPod armor.  Just the same two Foot Soldier toys over and over again.  Well, and the Shredder, who evidently has no eyes because Playmates couldn’t afford that sort of luxurious paint app.

Hey, and on the subject of that first wave of Nick TMNT toys… Jeez, those Turtle figures were fugly.  They really don’t capture the look of the characters from the show.  In fact, they look closer to the 4Kids TMNT than the Nick TMNT.  Playmates had a second go and released some more show-accurate molds of the characters which I hear went over better with collectors.

And funny that we never saw a lot of those vehicles in the cartoon.  Like the Rippin’ Rider or the Ninja Stealth Bike (unless I’m forgetting a season 1 episode, which is possible).  I guess with the show being CG-animated, it would have cost too much to make models for all the vehicles and bullshit so we were saved from that bit of shoe-horned commercialism in the series.

Anyway, it’s hard to believe this thing is 16 pages long (18 if you count the 2-page spread that catalogs the toys available), but the story is really milked to maximize the amount of photos advertising the action figures.  The toys have limited articulation and can’t emote, of course, but Hayes does the best he can with them.  There’s no credit for who did the letters and that’s probably for the best, since there are spelling and grammatical errors throughout.  The Shredder seems so confused on that last page.

Well, there you go.  If you ever see this thing on eBay, now you know what you’ll be getting.  I’ve no clue how it ends, since I got ahold of this thing two years after the promotion ended.  But if any of you have one of those cool spaceman phones that can scan QR codes, let me know how the tale unfolds: 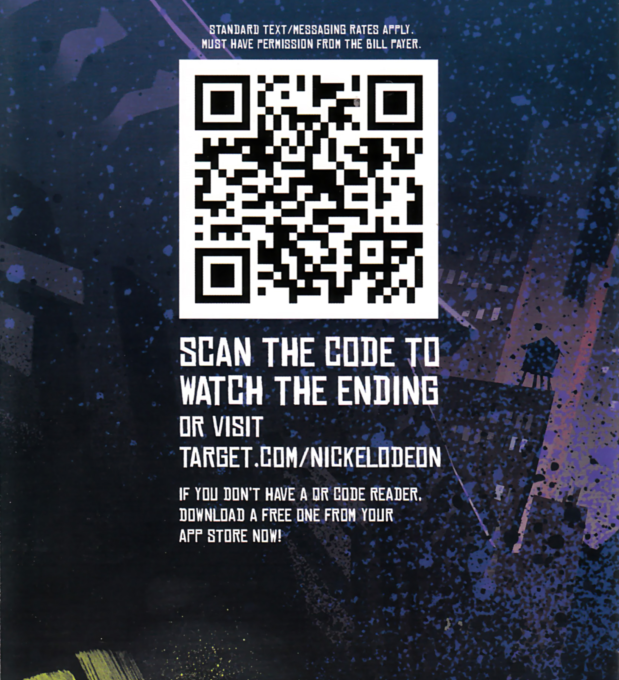 Grade: No grade, but I’ll compliment Waltz on his newly coined piece of political vocabulary: “Splintatorship”.