Velveeduh in The One That Got Away 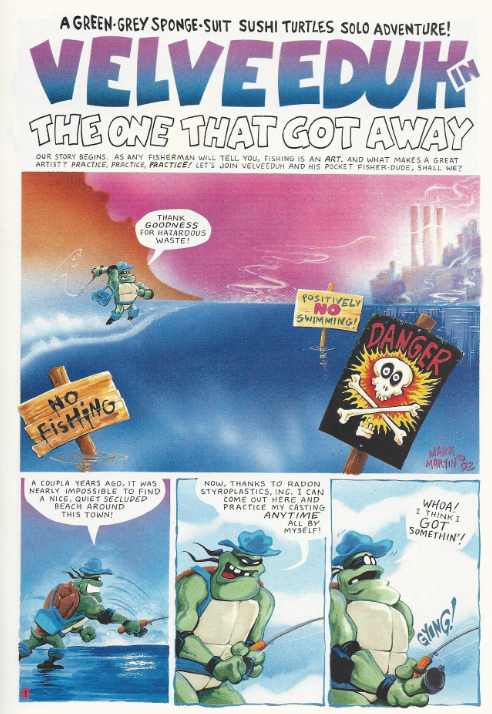 “Velveeduh in The One That Got Away”

Velveeduh, master of the pocket fisherman, is out in the bay near the Styroplastics, Inc. factory to get a little fishing done.  Suddenly, a giant mutant fish leaps out of the water and swallows him whole before beaching itself.

Nearby, Match-Stik is trying to catch some rare and elusive fish in his quest for knowledge.  He hears Velveeduh calling him from the belly of the giant fish and, thinking the fish-itself is talking to him, rushes over to pick the fish’s brain about philosophy. 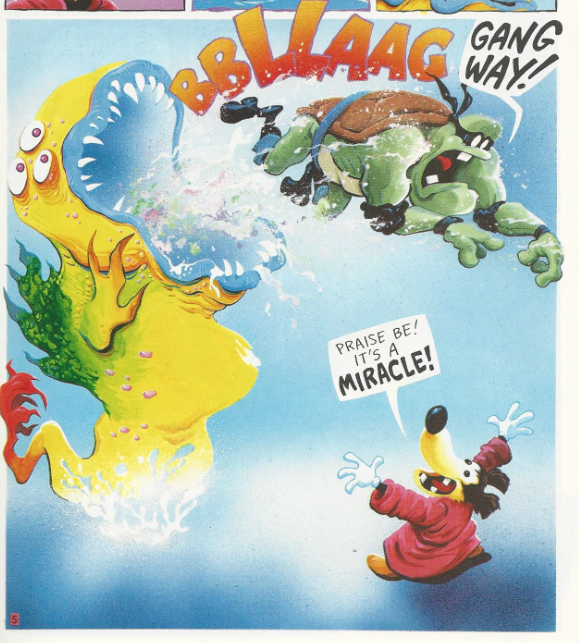 Velveeduh explains the situation to him and how he wants out of the fish’s belly, but Match-Stik insists that it’s for the betterment of science that he stay in there and learn all he can.  Match-Stik begins to deliver a stirring oration about tenacity in the pursuit of knowledge, which is enough to make the mutant fish puke Velveeduh up and leave.

Match-Stik is heartbroken over yet another lost opportunity to better himself, but Velveeduh cheers him up with a paraphrase from Dr. Seuss’s “One Fish, Two Fish, Red Fish, Blue Fish”.

*This story is continued from “Toyoduh in The Naked City”.  The story continues in “Viceroy in Action, Not Words!”.

Yeah.  Uh… Yeah.  That was a comic, alright.  Velveeduh got eaten by a fish.  The fish threw him back up.  Everybody laughed.

You know, I could’ve saved myself four paragraphs if I’d just said THAT in the summary section.  Sheesh.

This installment in the Sushi Turtle series doesn’t really have the fun story that the last chapter had and is just sort of bland.  Well, not so much in the way of the art, as Martin’s spastic style and lush painted colors are always pleasing to the eye even when the scripting is never funny.

A very “meh” sort of story.