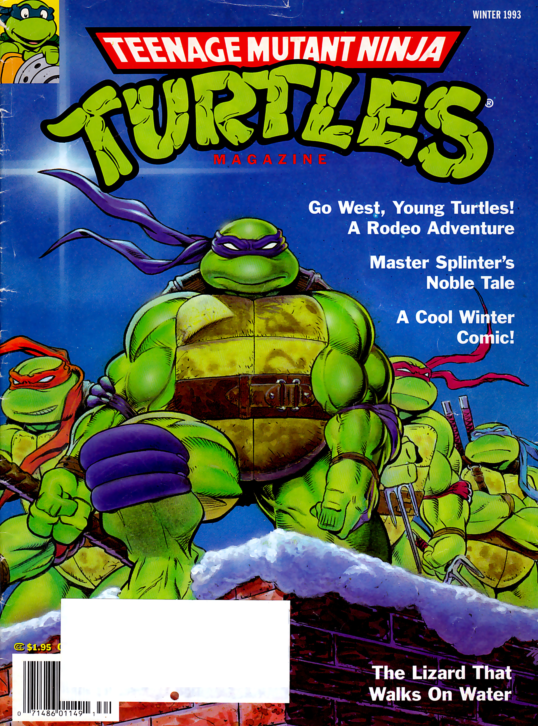 “‘Twas the Night Before Christmas…”

It’s Christmas Eve and April O’Neil reports on a rash of Santa Claus muggings that have been plaguing the city.  Bebop and Rocksteady are behind it, of course, mugging every street corner Santa that’s been collecting for charity. 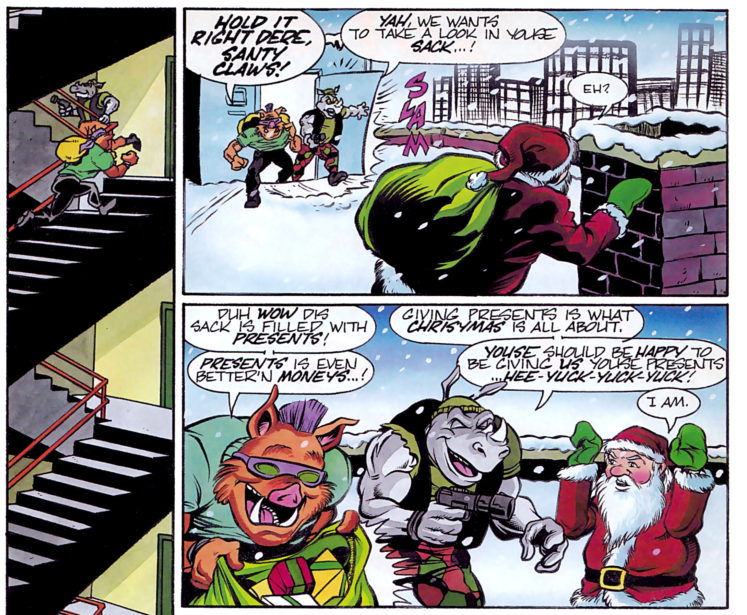 They see a Santa perched on a rooftop and run to hold him up.  They reach the roof and seize his sack of presents.  Before they can make off with the loot, the Turtles arrive and strike a pose.

A fight breaks out and in the chaos, Donatello slips on a patch of ice and goes tumbling off the roof.  Santa catches him and calls him out by name.  Donatello doesn’t know how this street corner Santa could know his name unless he was… the REAL Santa Claus! 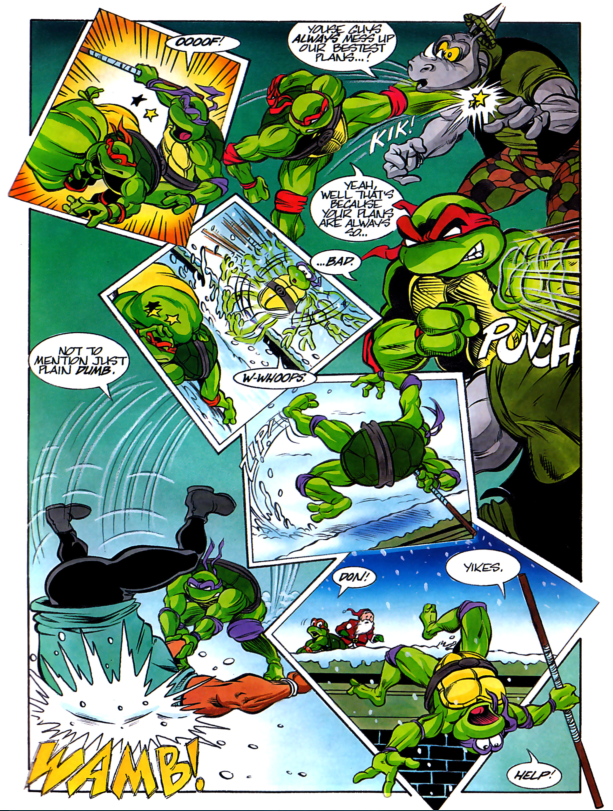 Santa gives each of the Turtles a gift and then proceeds to give gifts to Bebop and Rocksteady.  The evil mutants are confused, as they’re pretty sure they belong on the naughty list.  Raphael is irate, too, as why should the villains get gifts when they haven’t earned them?

Santa boards his sleigh, but as he departs he tells the Turtles that the holiday season isn’t just about being naughty and nice, but about forgiveness and compassion.  He suggests that extending an olive branch of peace in the form of a gift can do wonders to mend old wounds and bring even enemies together as friends. 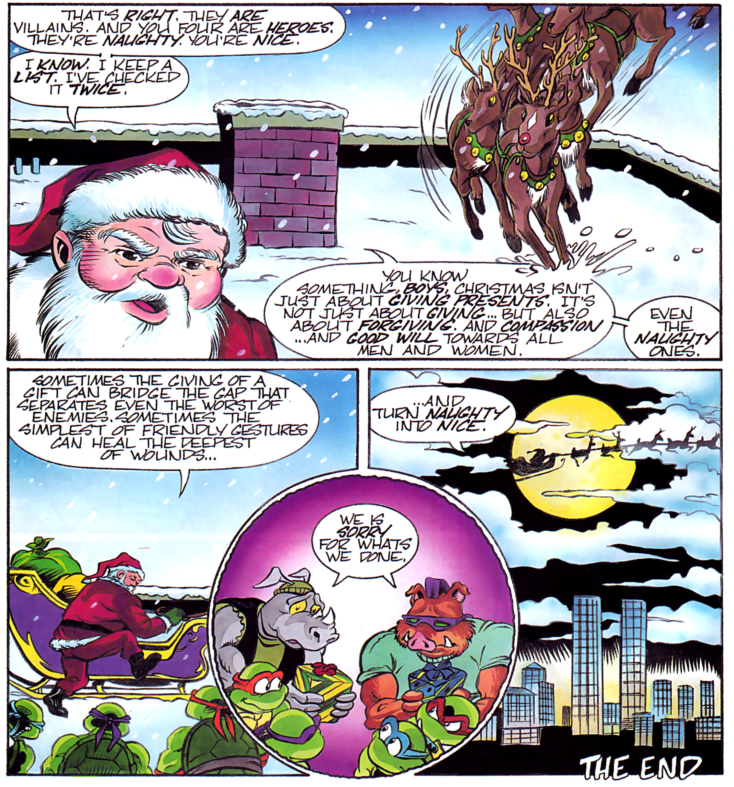 As they all watch Santa ride off into the night sky, Bebop and Rocksteady apologize to the Turtles for giving them such a hard time.

Awwww, what a load of saccharine mush.  Perfect for Christmas!

Actually, this whole strip kind of reminded me of the old Fruity Pebbles commercial they used to run during Christmas for decades (have they retired it?).  You know, the one where Barney dresses like Santa to steal Fred’s Pebbles, but then the real Santa shows up.  Fred is about to justifiably wreck Barney’s shit, but Santa suggests that the old enemies should put aside their grudges for the holidays (because in the Fruity Pebbles offshoot of the Flintstones multiverse, Fred and Barney are apparently bitter rivals).  So Barney gets a bowl of Pebbles even though he’s been an asshole all year and doesn’t deserve them.

That’s essentially what’s going on here, even if it does sort of give the kids the wrong message and defeat the entire purpose of the Santa Claus myth (it’s SUPPOSED to make kids behave year-round under the threat of no presents).  I mean, shit, if you can rob and steal and STILL get gifts every Christmas, then what’s the point of the naughty and nice lists?

Maybe the whole message about forgiving trespasses and quelling feuds would have been better served for a New Year’s Eve comic.  Isn’t that what Auld Lang Syne is all about?

Anyway, hey, this comic was six pages!  And it was by Brian Thomas, too.  Thomas was an irregular contributor to Archie’s TMNT Adventures series, usually working in the seasonal specials, and one of their better back-up artists.  His layouts have much more energy to them than Lawson’s have and they’re pretty elaborate and energetic for what’s essentially just a goofy short in a children’s magazine.

I love the page 4 layouts especially.  The action on the sides is pretty brutal as the Turtles land some devastating hits on the bad guys, but overlaid on top of that are some diagonal panels showing Donatello comically slipping on the ice with cartoonish visuals.  It’s a nice contrast that offsets the aforementioned violence that on its own might have been too much for a comic aimed at very small children.

All in all, I think I like this comic more for the art than the message.  Not that the message in itself is bad, mind you, it just doesn’t really gel with the character of Santa Claus, whose entire function is to determine which children get gifts and which don’t based on the merits of their behavior.