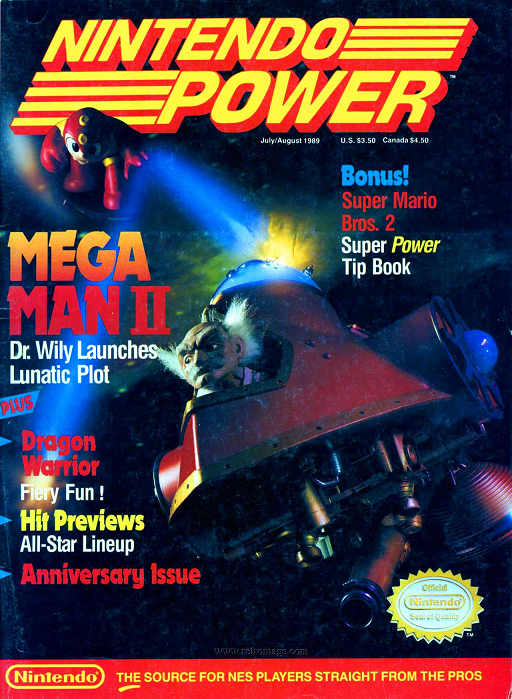 Young video game hotshot Nester finds himself at the corner of Mean Street thanks to a poorly planned bus route.  Luckily, April O'Neil happens by and offers to take him back to her place, as she knows some friends who might be able to help him. 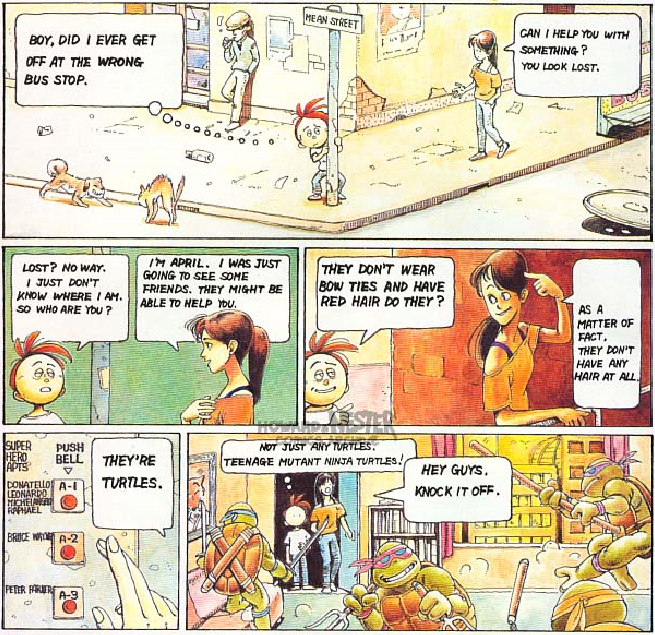 Nester returns with her to Superhero Apartments and meets the Teenage Mutant Ninja Turtles!  Nester recognizes them as heroes from the comics, but the TMNT recognize him as "Nester the Great", a video game champion.  They ask if he's played their new Nintendo game and Nester cockily replies that he "wrote the book on it". 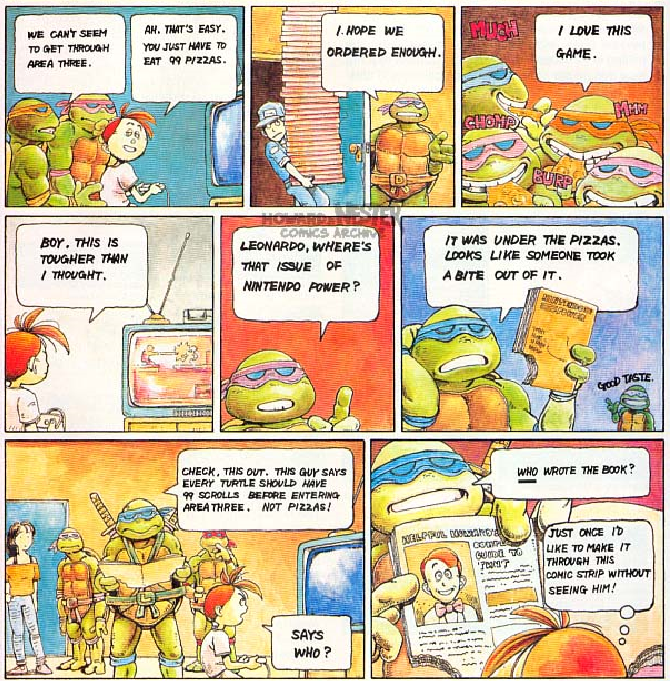 Donatello (or maybe Raphael, they both have purple bandanas) asks for a copy of Nintendo Power with the tips and tricks guide for the game in it.  Leonardo inspects the magazine and learns that you need 99 scrolls to get through Stage 3... not 99 pizzas.  He also learns that the book was written not by Nester, but by Howard.  Nester stews quietly that just once he'd like to get through a game without that bow-tied know-it-all showing him up.

*Special thanks to the Howard & Nester Archive for the strip, as well as for hosting every edition of the comic!
*The previous issue, Nintendo Power Vol. 6, featured the TMNT as the cover feature as well as a 10-page strategy guide to the NES game.

If Michelangelo thinks Stage 3 is a bitch I'd love to see his reaction to Stage 5.

Uh, yeah, anyway.  Howard & Nester comics were one of my favorite things about Nintendo Power in those early years.  I never actually had a subscription, but a friend of mine, also named Mark, had every issue.  I loved diving through his magazine collection when we were having NES marathons (usually while he was playing a 1-player game or a 2-player-but-1-player-at-a-time game) and those little comics were always a highlight.

Yeah, Nintendo Power gained something of a bad reputation in more recent years before its cancellation; not exactly a place for honest reviews of Nintendo titles (nothing ever seemed to "suck" according to them).  But hey, back in the NES days when there was essentially just one console (did YOU know anybody who owned a fucking Master System?  Shut up, you liar) it was an enthralling resource.

I honestly don't know who the artist for these comics was.  I know Howard Phillips (a Nintendo of America employee) is credited as the creator of Nester, and I know he was the basis for the Howard character, but I'm pretty sure he didn't do the comics.  They look suspiciously Japanese and several of the word balloons are tall and skinny, like manga word balloons, and have poorly centered English text that looks sloppily overlaid.  I googled myself silly, but couldn't find any info.  (EDIT: Turns out the artist IS a Japanese person.  Shuji Imai!)

Anyhow, this particular comic is just a 2-pager but it tries to fit at least one gag into each panel to maximize space.  What I loved about these old Howard & Nester comics was how authentic they were when it came to describing the games.  Nester is talking about Stage 3 of the first TMNT Nintendo game and on the little CRT television he's playing the game on, Stage 3 is accurately (if crudely) represented.  He's even playing as Donatello, AKA The Only Useful Fucking Character In That Game.

What I'm trying to say is that Captain N & the Game Masters could have learned a lot from these Howard & Nester comics.

April's design here is actually... and I'm not being esoteric or obscure here just to be cool or different... one of my favorite April designs ever.  It's very simple and girl-next-door with the plain-Jane ponytail, but she's got that little bit of pizzazz going with the shoulderless, loose-fitting t-shirt and the tubetop (or sports bra?) underneath it.  It's a cute design and I've always liked it for some reason.

The Turtles, though... Yeah, what a weird look.  It's mostly the eyes, which instead of being solid white are solid... blue?  Like they have sunglasses on underneath their bandanas.  The coloring is also a little confused, as Don and Raph have bandanas that appear to be different shades of purple, so you're not really sure which Turtle is which most of the time.

Other than that, well... 2 pages.  I'm surprised I've managed to write this many paragraphs about the thing.  Maybe I'm letting the nostalgia cloud my judgment, but seriously, go read through that archive I linked to in Turtle Tips.  The humor is pretty dry in those comics, but they're certainly "neat" and the representations of the featured games are surprisingly authentic.

Man, if only Nintendo would collect ALL their Nintendo Power comics.  I remember some pretty great Mario, Metroid and Star Fox comics that were serialized in that book, even during the questionable Gamecube era when people were falling out of love with the magazine.  Maybe some day...