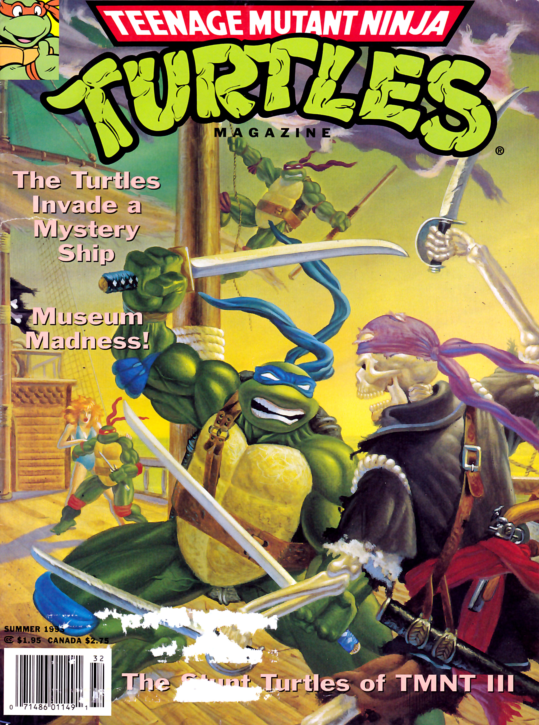 “The Riddle of the Rusty Scupper”

The Turtles and April have travelled to the Caribbean to enjoy a well-earned vacation (after using all their quarters to trap Krang in a washing machine).  While lounging on the beach, they see an old pirate ship from the 1590s called the Rusty Scupper sail into view.  Greedy for treasure, all five of them board the ship. 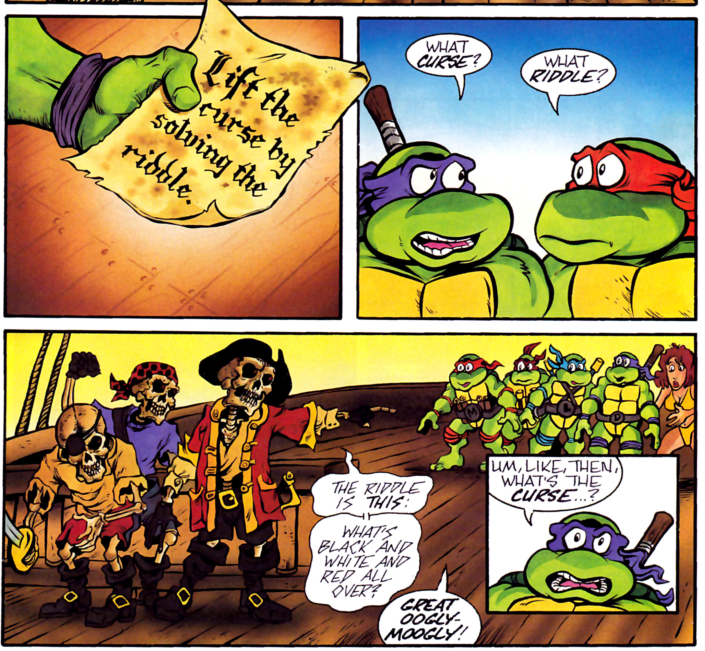 They find a note challenging them to solve a riddle and lift the pirate ship’s curse.  The riddle: “What’s black and white and red all over?”  They’re immediately attacked by skeletal pirate ghosts who say that the curse forces them to do battle with anyone who boards their ship… at least until the riddle is solved.

The Turtles try a bunch of goofy answers, like “a skunk with a bad complexion” or “an embarrassed zebra”, but none of them lift the curse.  April suggests they try something more pirate-related and sees the Jolly Roger hoisted high.  She guesses “a skull and crossbones against the setting sun” and the pirates begin to vanish.  They thank her for freeing them before the Rusty Scupper vanishes, too (sending April and the Turtles plummeting into the water). 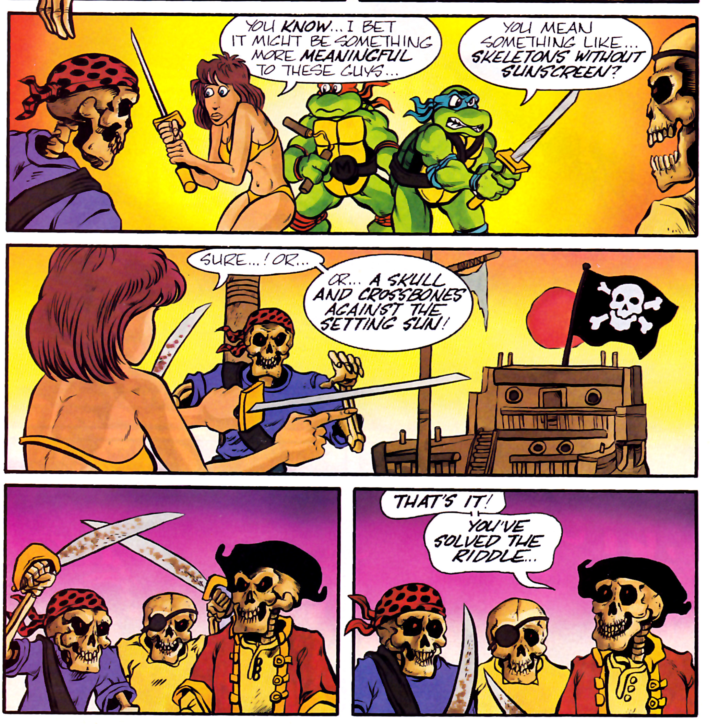 Later that night, the Turtles gather around a campfire and exchange bone-related puns.  Enduring this, April considers uttering a few curses herself.

*This issue was preceded by TMNT Magazine (Welsh) #12.  It is the last issue in the series.

*The previous issue did not contain any comic content.  The last issue to feature a comic was TMNT Magazine (Welsh) #11.

Or maybe not so bad, considering your feelings toward these comics.  But I don’t know why anyone would have strong feelings about these TMNT Magazine comics one way or the other.  They were a neat little bonus from the era, and the early issues introduced a lot of characters who’d go on to do greater things (be it in Archie’s TMNT Adventures or as part of the Playmates toyline), but they were pretty corny and inoffensive.  At their worst they were heavy handed with environmental messages and at their best they were a showcase for obscure characters we didn’t see very often.  Pretty middle of the road, but what do you expect from 4-to-6 pages every three months?

This issue in particular is a bit of a yawn-fest and doesn’t do much with the extra 2 pages aside from make room for more silly guesses at the riddle.  I did like the ghost pirates, but then, I think “The Fog” is a good movie, so what do I know?

Looking back over the whole 14-issue TMNT Magazine series (13 issues +1 special), it was very much a product of its day.  Many popular cartoons of the era had these quarterly fanclub-type magazines and they were all extremely interchangeable.  The Real Ghostbusters had one, as I recall, and it was almost exactly the same (it may have even been published by Welsh, but I'm not sure).  There was a LOT of filler that only tangentially related to the brand (science articles, safety tips, cheap magic tricks you can do in the kitchen, shit like that) with the comics and maybe even the text stories being the highlight.

But when comics like THIS are the highlight of your magazine, then in retrospect it was probably a shitty magazine.