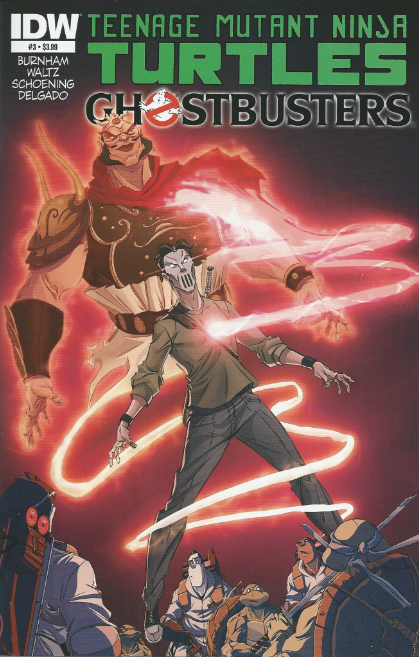 The Turtles and the Ghostbusters arrive at Madison Square Garden to deal with Chi-You and his thralls.  Donatello attempts to get the hang of the proton pack he borrowed, but it’s a learning experience.  While they keep Chi-You distracted, Winston sneaks up and opens a trap.  Oddly, the trap fails to suck Chi-You in.  Fighting his possession, Casey explains that the thralls tether Chi-You to Earth, keeping him from being contained.  Chi-You then reasserts his dominance on Casey and has him punch Winston, releasing him from the trap’s grip.  Chi-You and his thralls (Casey included) vanish. 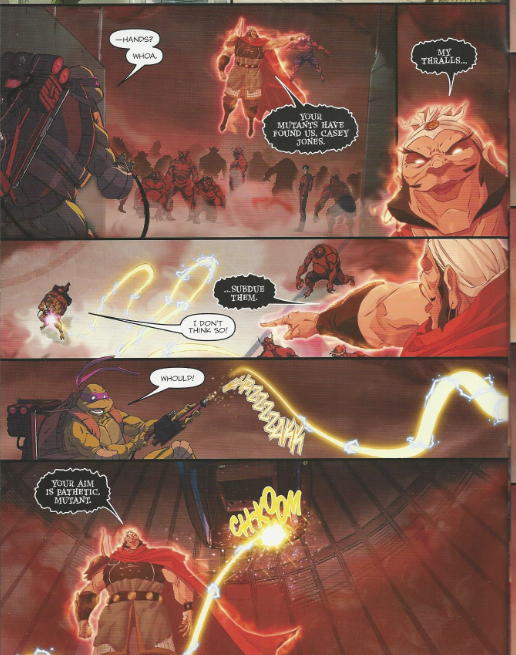 Back at the Firehouse, Kylie suggests they rig the traps the same way they did when the Firehouse was attacked by Tiamat’s possessed; a low level burn might exorcise the people.  Unfortunately, the circumstances are different and the same trick won’t work, but the suggestion gives Don an idea.  A low level blast from a proton stream, directly in the chest, might free the thralls.  Egon, Ray and Don stay up working on modifying the arm-mounted packs while the rest of the Turtles and Ghostbusters hit the hay.

In Chinatown, Chi-You is at his wit’s end trying to control Casey.  Casey knows that Chi-You becomes sloppy when he loses his temper, so he’s trying to make him as angry as possible.  For his defiance, Chi-You picks Casey up and swallows him.

The next morning, Janine gets a call about a giant bull rampaging through Chinatown.  Egon, Ray, Don and April stay behind to work on the portal home while the rest go to stop Chi-You. 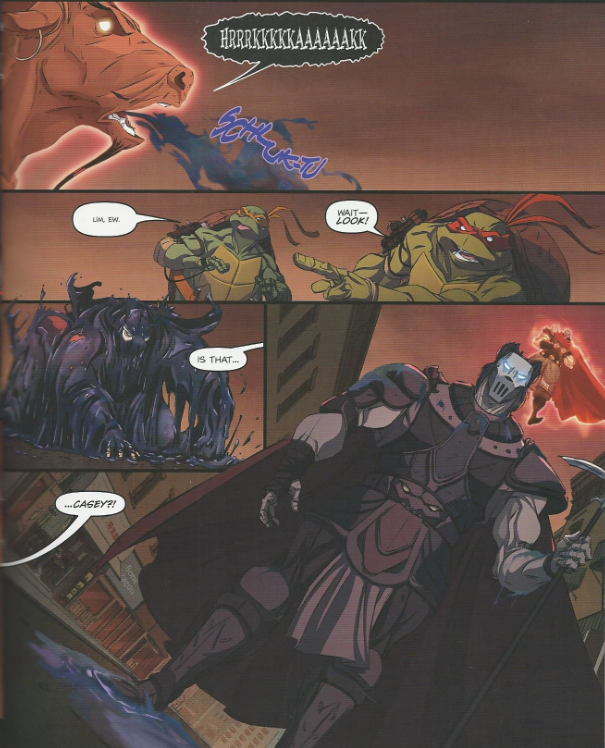 They meet him in battle and Mikey manages to free one of the thralls.  However, the possessed are too agile to get close enough to tag.  Chi-You then vomits up Casey, who is now gigantic and clad in armor.  Raph and the possessed Casey go one-on-one while Peter retrieves a proton bazooka.  The bazooka blast injures Chi-You, distracting Casey long enough for Raph to tag him in the chest, freeing him.  Peter suggests they vamoose, as they won’t want to be around when Chi-You reforms.

At the Firehouse, Casey makes a full recovery.  Over pizza, Ray and Don come up with a more efficient way of freeing the thralls; with an EMP blast.  Egon assigns Ray and April to work on the EMP while he and Don finish the portal. 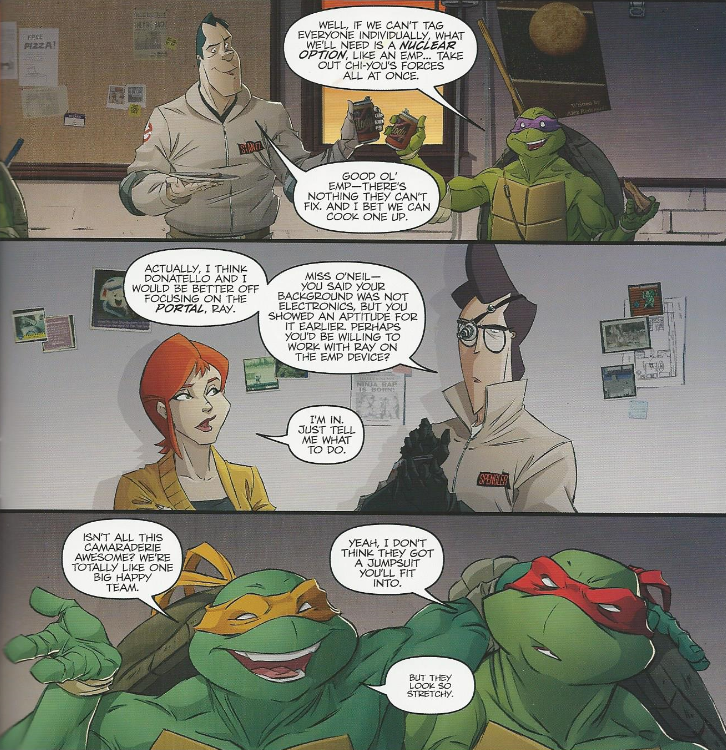 Back in Chinatown, a furious Chi-You reforms.  He’s decided that he can no longer ignore the Turtles and the Ghostbusters and prepares his thralls for a direct attack.

*According to Burnham, he forgot to title this issue.  And according to Curnow, it went to print with issue #2's title, "The Meeting of the Minds," by mistake.  The proper title "Showdown in Chinatown" didn't come around until the trade paperback collection was published.  Oddly, for the hardcover Deluxe Edition, the issue was titled "Just in Casey".  So three titles for this chapter, so far.

Well, Casey saves a little face, I suppose.  He’s been a punching bag in the IDW comics for a while, with being turned into Chi-You’s helpless puppet something of an all-new low.  He fights the control and helps the Ghostbusters figure out how to stop Chi-You, but you know.  He still gets beat-up (IDW Casey just can’t win a fucking fight, even when he’s powered by a god).

The pacing of this issue kinda bugged me: The Ghostbusters and the Turtles go fight Chi-You, return to the Firehouse, go fight Chi-You, return to the Firehouse.  Just back and forth like that.  The fights were fun and the dynamics between the characters were entertaining, but the storyline has been pretty run-of-the-mill so far.  It sort of reminds me of the recent Sonic the Hedgehog/Mega Man crossover Archie did.  It was more about the references and the fanwank and the overall sense of fun and adventure than, well, telling a very original or suspenseful story.

I can’t come down too hard on that angle; MOST crossovers work this way.  It’s just a staple of the cliché.  You kind of know what you’re going to be getting from the start and the real enjoyment comes from seeing the casts interact, not so much the plot.

My favorite moments weren’t actually the parts where they fight Chi-You, but more so the scenes where they all lounge around the Firehouse and talk shop.  Burnham works in references to his Ghostbusters series, such as the possessed “bird things” that Tiamat attacked the Firehouse with, and it all feels very casual.  What’s neat is that not every Turtle and Ghostbuster pairs off with their obvious analog.  Each characters sees a parallel with another in some way and there’s a little bit of everybody in everybody.

As mentioned, the issue is full of fanwank.  There are jokey references to the Party Wagon and the Turtle Blimp, but I liked the background Easter Eggs a bit more.