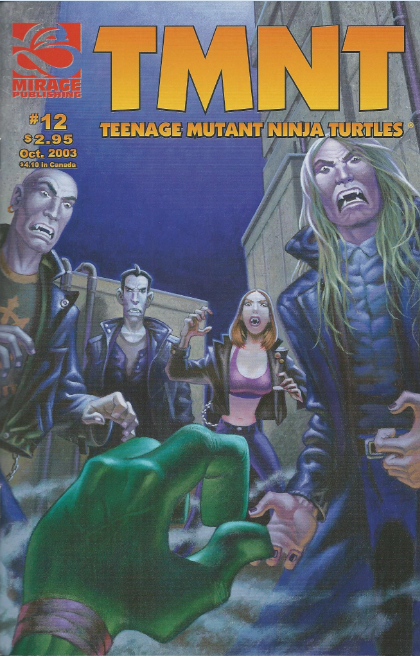 In the attic of the apartment building, April looks over some heirlooms that were saved from the antique shop fire.  They’re her father’s sketchbooks and they’re packed with pages of drawings of her as a baby; really detailed drawings. 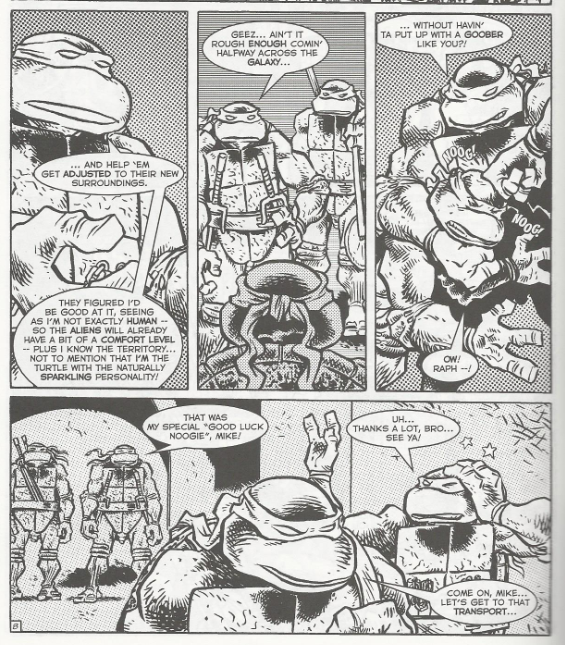 Down in the lair, Donatello packs his things.  He’s going with the Utroms to investigate the disappearance of their scout ship at the Venezuelan tepui.  Michelangelo goes with him, as he has to get to the moon island to start his new job as a “translocation reorientation facilitator” for alien tourists (basically, a tour guide).  Leonardo has to leave, too, as Karai has asked him to go over some security issues the Foot has been having.  Leo doesn’t much trust her, but wants to maintain the good terms between them.  That leaves Raph alone in the lair and he decides to go out for no other reason than not to be alone with his memories of Splinter.

Back in the attic, Casey shows up with some tea for April.  He helps her go through some boxes and they find an 8mm film reel of home movies labeled “Summer ‘62”.  April has vague memories of the movies, taken during a trip to Kittery, and she recalls something her father was drawing in his sketchbook.  The memories don’t add up, though, and she asks Casey to fetch the Super Eight projector. 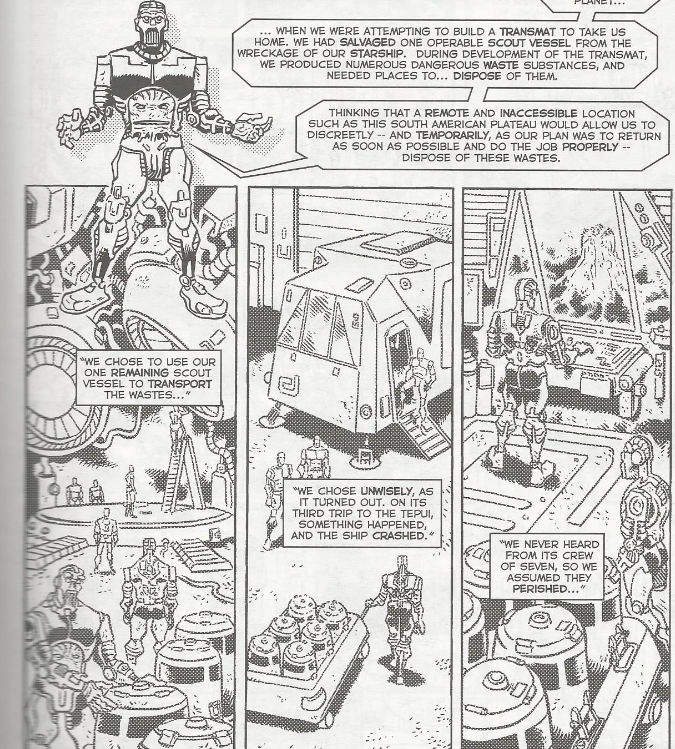 On an Utrom anti-grav tug, Donatello gets the lowdown on the mission.  He watches Captain Glonar’s final transmission, but he’s left with several questions: Particularly, why were the Utroms there in the first place?  The Utrom commander explains that during the time when they were marooned on Earth, the Utroms used the remote Venezuelan tepui as a toxic waste dump.  Their dump vessel was ultimately lost on a trip there and they were never able to recover it.  Following First Contact, the Utrom government has decided it wants to clean up its mess, albeit secretly, and Glonar was sent to remove the old waste and hopefully recover the remains of the lost dump vessel crew.

Of course, there’s more to it.  The Utrom commander fears that the toxic waste that was dumped on the tepui was the same sort of waste that mutated the Ninja Turtles, which might account for the talking raptor creatures.  A team of human “dinosaur hunters” also went missing while exploring the tepui and the Utroms want this taken care of before anyone else has to die for their mistakes.  Donatello sees that they’re heavily armed for this excursion, but wonders if it will be enough.  Below, hiding in the jungle, is one of the giant wood creatures. 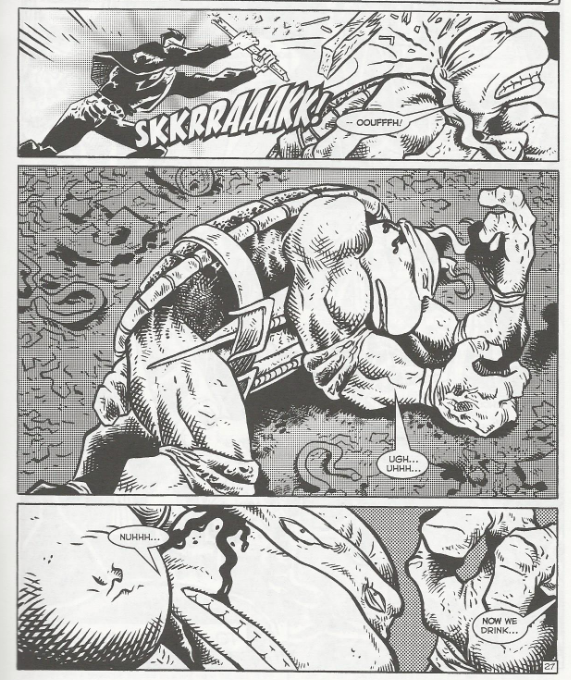 In New York, Raphael has gotten plastered at a bar called Galaxies that serves humans and aliens.  Raph tells a table of young ladies about his adventures in the Triceraton arena, but they aren’t particularly impressed by the middle-aged mutant.  Raph decides he’s had enough and wanders out into an alley, unaware that he’s being followed by the same vampires who recently attacked women in Central Park.  They jump Raph, explaining their intent to suck him dry, but Raph just laughs them off.  He says he’s fought real vampires in the past and can tell that these guys are fakers.  However, being inebriated, he isn’t ready for a blow to the head with a two-by-four.  The vampires then loom over him, hesitant about drinking “alien blood”.

*In the letters page, Laird mentioned that a “how the Turtles got their weapons” story would be told one day in Tales of the TMNT Volume 2.  It never was (though Archie covered it in their universe).

So this is it.  Did you like seeing all four Turtles together in this issue?  Man, I hope so.  Because you are never going to see it again in the pages of TMNT Volume 4 (at least, as of this writing… 12 years later).

The Turtles bid each other farewell and all go their separate ways in this issue.  It didn’t seem like a big deal at the time, but how could we have known then that a decade and some change would pass and they’d all still be scattered to the four winds?

In a way, the moment feels kind of like Laird is calling a “do-over” for a plot point that got quashed during TMNT Volume 2.  That volume opened with the Turtles all reacting to their big “growing up” storyline (“City at War”) by deciding to go their separate ways.  They house hunt and each Turtle decides on an appropriate location for themselves.  And then Baxter Stockman shows up and attacks, the Turtles go to DARPA to save Raphael, and the volume ends.

When we catch up with the Turtles all these years later in Volume 4 (the Image Volume 3 having been stricken from canon), they’re all still living in the lair like they’d never wanted to move out in the first place.  An issue of Tales of the TMNT Volume 2 would eventually be written to explain why they never followed through on their desires to separate circa Volume 2, but when THIS issue was written we were sort of experiencing déjà vu.

So the Turtles go through another “growing up” event (the death of Splinter) and THIS TIME they actually follow through on their intent to separate.  Of course, it’s not quite the same deal.  They all thought it was just going to be a temporary thing; exploring a tepui, getting a part-time job, helping the Foot, getting a beer.  Little did they know this was going to keep them apart for YEARS (real-time, not story-time).

It is sort of funny, though.  When the Turtles actually INTENDED to separate for good and all move into their own little places, that all fell through almost immediately.  But when they all thought they were just going to go do something for an evening… BAM!  Scattered to the four corners of the universe for ten years.

Of course, this now means that the narrative of Volume 4 is going to be pulled in five different directions (the Turtles plus April) and will only proceed to be fractured even further as time goes on.  So it’s a small wonder 12 years hasn’t been enough to see these arcs resolved, at least at the pace they’re reduced to.

To talk about more specifics in this issue, I rather liked the bit where Raph is trying to pick up chicks at an alien bar.  It actually harkens way back to TMNT (Vol. 1) #5 when he did that exact same thing.  Of course, he’s hitting on chicks that look to be quite a bit younger than him (he’s in his mid-to-late 30s by this point) and they find his anecdotes more giggle-worthy than anything else.  He’s become “that guy” you see at bars all the time; the dude pushing forty who thinks he can still pick up 19 year-olds.  Sorry, man.  That Purple Heart from Desert Storm will only get you so far.

April’s plot is thickening, though no faster than any of the other plots in this book.  A good chunk of her page space is spent on prattle between her and Casey (discussing the kind of tea they like, Casey going on about an old racecar, etc.) and it doesn’t really help to liven up the already boring April subplot (but aren’t her subplots ALWAYS boring?).

Don gets a sizeable portion of the issue dedicated to his debriefing.  While some of it goes over info we already know, it’s mostly background that’s new to us.  The Utroms really did create a LOT of mutagenic toxic ooze during their stay on Earth, didn’t they?  So much that they had to dump it in Venezuela (like South America doesn’t have enough problems).  I like that the (unnamed) Utrom commander reiterates that they really honestly WERE going to clean everything up!  Truly they were!  It’s pleasant whenever a writer puts a chink on the Utroms’ “perfect race” armor.

The Leo and Mike subplots don’t get time to go anywhere in this issue, so nothing to talk about with them.

And that’s that.  Get ready for a lot of weird sci-fi shit.