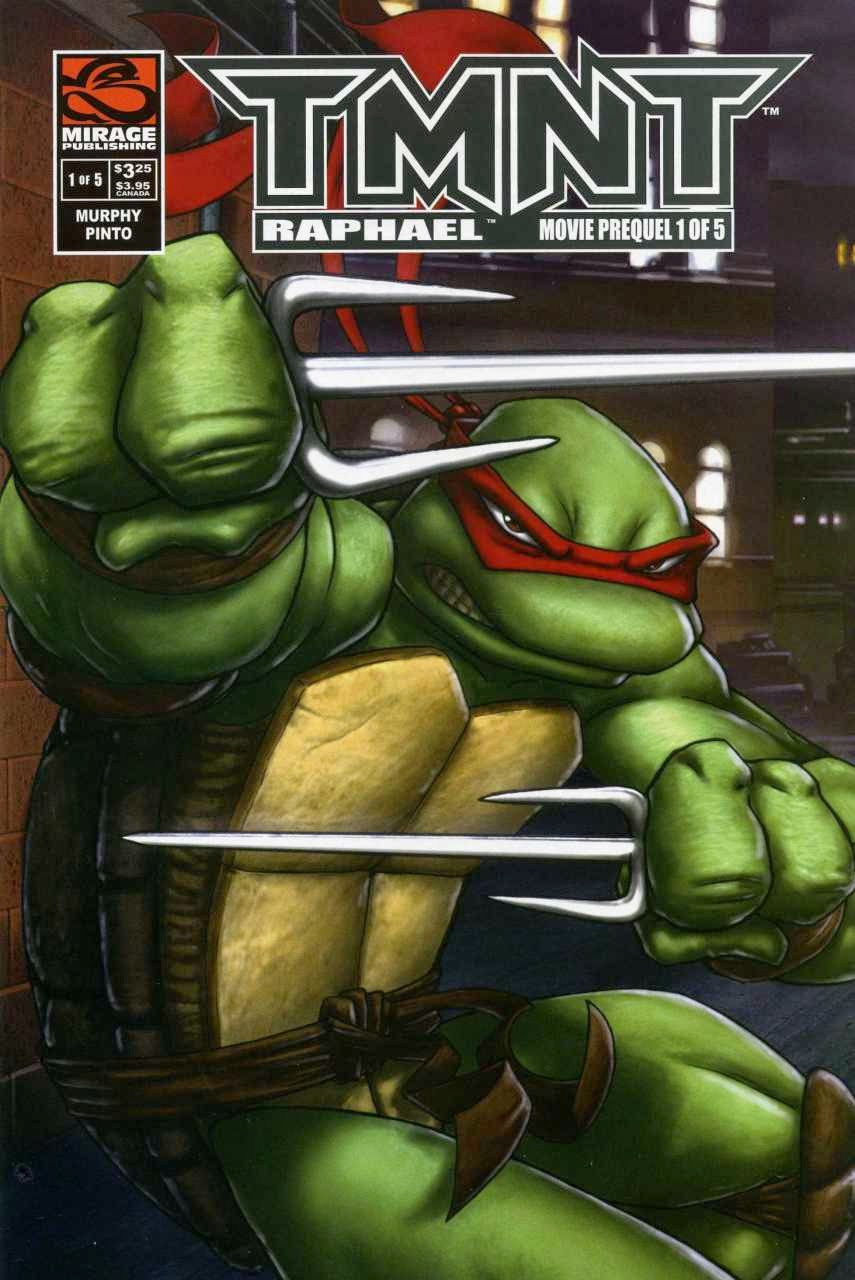 On a rooftop, Raphael tells Casey how he hasn’t been getting along with his brothers lately; Leo in particular.  They’ve gotten so hung up on big picture threats like Triceratons and Utroms that they’ve stopped noticing the little people who need help the most. 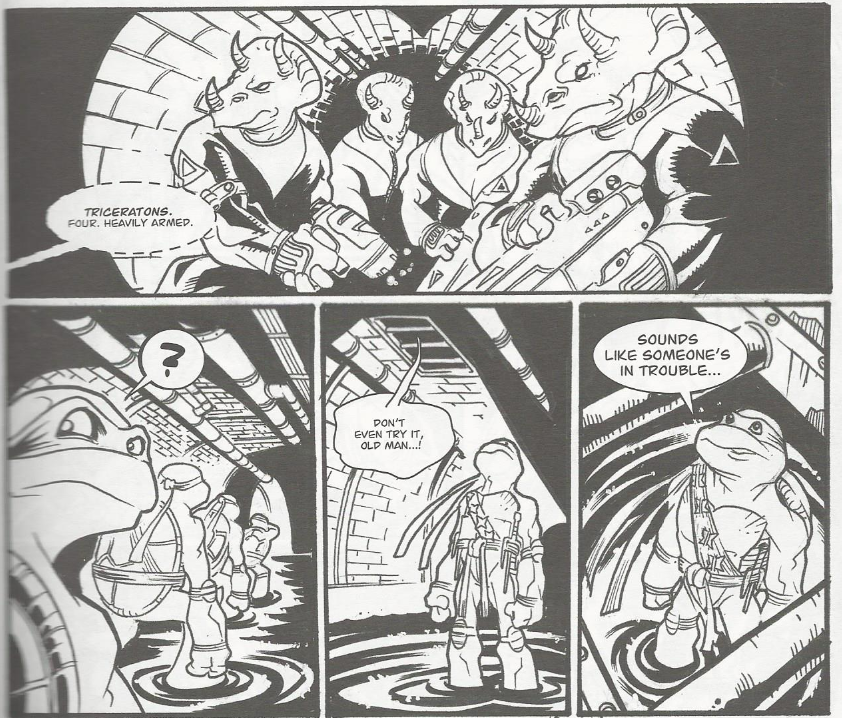 Eighteen months ago.  The Turtles trudge through the sewers, ready to intercept a quartet of heavily armed Triceratons.  Raph hears trouble coming from the surface; an old man being attacked by a gang.  Raph tries to ditch his brothers to help the old man, but Leonardo won’t let him.  They beat up the Triceratons and as soon as they’re finished, Raph sees to the old timer.  He’s been beaten up pretty bad, but dusts himself off and wanders home, mumbling that were he still a young man he’d have mopped the floor with the thugs.

Leo gives Raph an earful for leaving the group without his permission and reminds him that Splinter has told them never to interfere in the world of man.  While they argue, Donatello and Michelangelo go over their plans for Mikey’s “mascot” idea.

Later, Splinter calls them all together and says that he’s at last determined which of them has earned the privilege of going on a yearlong training pilgrimage around the world.  It’s Leo, of course.  Raph storms out and Leo snipes at him some more, telling Raph that Splinter would have chosen him if he’d trained harder and followed orders. 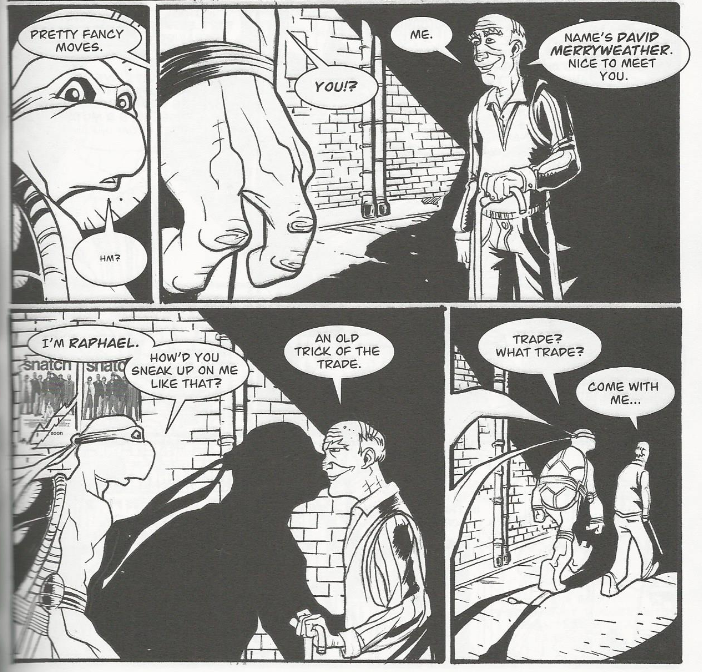 Raph heads over to Harlem, looking for trouble, and comes across a gang mugging a prostitute.  He mops the floor with them, and when he’s done the old man from earlier approaches him (having also heard the woman scream).  He says his name is David Merryweather and he invites Raph back to his home.  David tells him that in his younger days, he also used to be a crimefighter and the pair swap origins and stories.  Raph gets a call from Splinter, telling him to come home so he can see his brother off.  Raph leaves, but moments later he hears a gunshot coming from David’s place.

He returns to find that the thugs from earlier tracked David down and shot him.  Dying, David makes Raph promise him two things: that he’ll put the punks who shot him behind bars, and that he’ll remove all his crimefighting paraphernalia from his home so no one can ever learn his true identity.  Following David’s instructions, Raph opens a secret doorway and finds a chamber loaded with weapons, armor and a motorcycle. 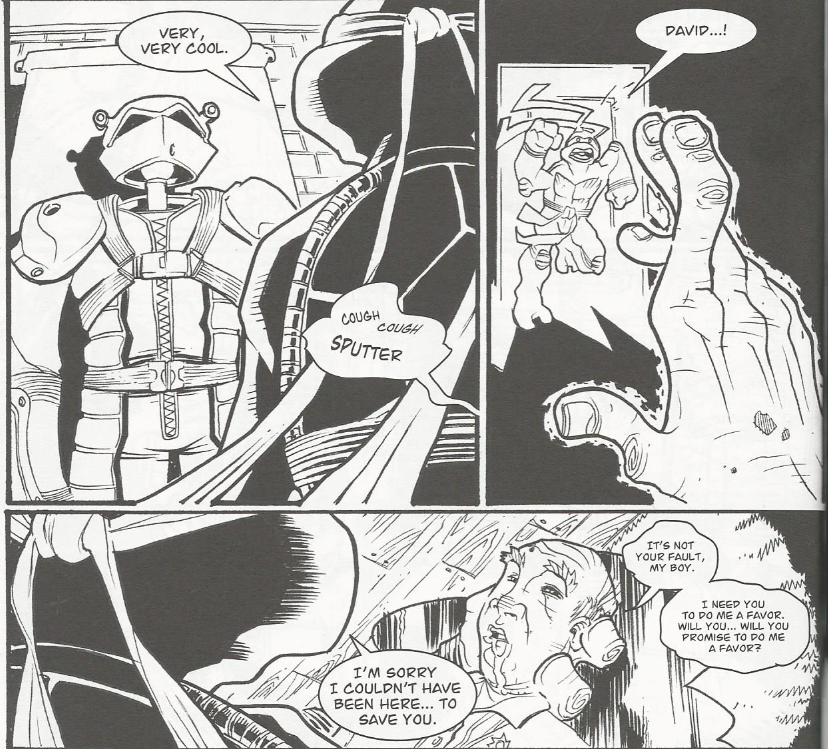 The present.  Raph takes down the punks who shot David.  Later, he decides to put the gear David gave him to good use and become a vigilante.  As Raph and Casey perch on a rooftop, Raph vows to keep his word.

*If you consider the 2007 CG TMNT film to be in the same continuity as the live action film trilogy, then this story is continued from TMNT III: The Movie.  The story continues in TMNT Movie Prequel #2 – Michelangelo.

*One of the Triceraton blasters will appear in the trophy room in the 2007 TMNT film (but not in the comic adaptation of said film).

*This comic was reprinted in TMNT Comic #1, TMNT Comic #2 and TMNT Comic #3 with new colors by Junior Tomlin.  Much of the blood during David's death scene was awkwardly censored by being colored light brown.  As such, it looks like he's vomiting oatmeal rather than bleeding internally.

The 2007 TMNT film from Imagi was something that existed.  And that’s about the most anyone can say about it.  TMNT the Movie elicits wistful nostalgia from people, Secret of the Ooze elicits entertainment in a “so bad it’s fun” sort of way, and even TMNT III and the Michael Bay movie elicit feelings of loathing or resentment.  But who the Hell remembers the Imagi flick with anything more than an “Oh yeah.  I forgot about that one”…?

So considering my unbridled apathy for the film, I passed on these prequel comics when they first came out.  I eventually picked up the trade paperback collection when I found it marked down to half price about three years later, but I still couldn’t be bothered to read the comics until just this very minute.  The Imagi era TMNT stuff is so bland and banal, I just can’t work up the enthusiasm to care about this expanded mythology.

There’s debate as to whether the Imagi TMNT flick is a sequel to the live-action movies.  Nick-nacks from the live-action movies appear in the trophy room, and Shredder is considered dead at the hands of the Turtles, but beyond such vagaries there isn’t a stronger connection.  I consider it a sequel, personally, but a sizeable sample population doesn’t, so whatever.  It’s up to you.

But whether it’s a sequel or not, it does kind of throw you into the deep end, beginning the story in medias res.  These prequel comics attempt to add some background and context to the film, which feels like the second season of a cartoon series that was made without a first season.

Steve Murphy pens this script and does an okay job weaving in the other Turtles’ subplots so these comics have something of a natural progression for the characters (Leo gets chosen to go on his pilgrimage, Mike and Don come up with the "mascot" idea, etc.).

The pacing is strange, especially those bookending segments with Raphael and a mute Casey Jones perched on a ledge looking at nothing.  There is really no need for Casey to be there and his presence just confuses things, considering Casey doesn’t figure out that Raph is the Nightwatcher until the movie.  Wouldn’t it have made more sense to end on Raph, dressed as the Nightwatcher, perched on that rooftop?  Casey doesn’t even help him take down the punks who killed David, so why was he there?

The Nightwatcher stuff was just one more element of the film that didn’t make a whole lot of sense and Murphy tries his best to justify it.  So Raph took on the costumed identity because Splinter forbade his sons from interfering in the world of man (they use that melodramatic wording, “world of man”, several times)?  Okay.  They can fight aliens in the sewers, but they can’t stop purse-snatchers on the streets.  I guess this Splinter is just a big picture sort of guy.  I suppose this was meant to explain why Raph would keep his vigilante lifestyle a secret from his family and why Leo would have such a problem with it in the movie (again, a part of the movie that made no sense considering how every other incarnation of the Turtles behave as vigilantes).

The origin presented here is a throwback to Nite Owl’s origin from Watchmen, which was a neat little homage to throw in there.  Nite Owl… Nightwatcher… Close enough.  I mean, David sure is quick to trust Raphael and hand over all the tools of the trade to him, but this issue only had so many pages to work with so we’ll just have to let it slide.

Leonardo is a total prick in this comic, but I guess it’s keeping with his character in the movie (where he was a MASSIVE prick).  He sees being sent on a yearlong pilgrimage as a reward, but I’m thinking maybe it was more of a punishment just to get that little shit out of the lair.  This is one of the more obnoxious renditions of Leonardo I’ve ever read, where he has no interest in helping people and is just constantly sniping at Raph at every opportunity and rubbing his victory (the pilgrimage) in his brother’s face.  He’s fucking awful in this comic, actually making Raphael come off as the more well-balanced Turtle for a change.

Fernando Pinto’s art is a bit lopsided; some pages look great while others look rather crude and clumsy.  He breaks model for expressions, which is cool, and there’s a lot of energy to his work.  However, his fight scenes can be extremely chaotic and I found myself having to closely inspect the panels to try and decipher what was going on.

All things considered, this is an okay start to the movie prequel miniseries, even if it can be pretty baffling.  These issues are intended to give more context to the film so it’ll make sense, but with the Triceratons and shit it winds up throwing the audience into the deep end just as much as the movie did.  The characterization is consistent with the film, but all that really serves to accomplish is make me realize how lousy the characterization in the film was to begin with.

Grade: D+ (as in, “David, you’re a wealthy, bitter white man living in the slums of Harlem.  It’s a miracle you lasted as long as you did”.)