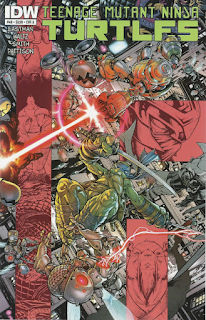 Down in the lair, the Turtles and Splinter defend Donatello’s body from Baxter Stockman’s Mousers and Flyborgs.  Donatello-Metalhead arrives to the party and contacts Harold to teleport his body to the Fugitoid’s lab on Burnow Island.  Once Fugitoid receives the body, Metal-Don then asks Harold to call in Nobody and Alopex for back-up. 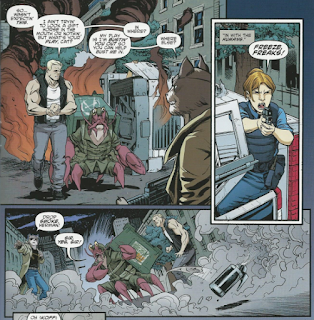 On the streets, Detective Lewis’ paddy wagon containing Hun is stuck in traffic, making it a sitting duck for Old Hob and Herman the Hermit Crab.  The two Mutanimals blast the wagon with explosives and escape with a confused Hun before Lewis can catch up with them.  Hob wants Hun to help him "bust in with the humans" and Hun doesn't really have anything better to do at the moment, though he's concerned about seeing Slash again. 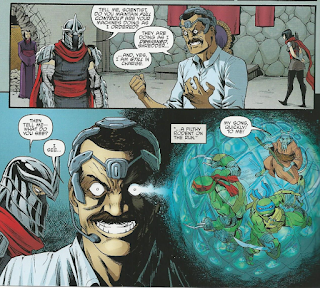 At Foot HQ, Stockman uses his helmet to command his armies to pursue the Turtles and Splinter into the sewers.  Kitsune approaches Shredder and registers her surprise that he would allow a gaijin to assist the Foot Clan.  Shredder informs her that this is not Foot Clan business, but his own personal vendetta, and once Stockman has served his purpose he will be eliminated.  Kitsune reminds him that Karai does not approve of his methods, but Shredder insists that when all is said and done he will put his Chunin in her place. 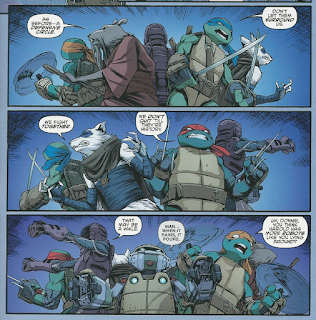 The Turtles and Splinter escape to the sewers and swim out to the nearest river.  The open space affords them little advantage and they’re eventually corralled by the Mousers and Flyborgs to a nearby bridge.  Luckily, Nobody and Alopex arrive in the nick of time and the united team make their last stand against the encircling army.

*Hun mentions his tussle with Slash which went down in TMNT (IDW) #28.

*This issue was originally published with 4 variant covers: Cover A by Santolouco, Cover B by Eastman and Pattison, Cover RI by David Lafuente, and Subscription Cover by Ryan Browne after Wally Wood’s Weird Science #19.

This was an action-packed issue, no doubt about it, and I love me some action… But the problem was that it felt a bit listless in spite of all the action.  It wasn’t that Cory Smith’s art wasn’t full of energy (there are a couple of superb two-page spreads and several splash pages), it was more that there’s only so many times you can see a Turtle smash a Mouser or a Flyborg before the experience gets repetitive.

It’s like, I dunno, playing TMNT Arcade or The Manhattan Project on the NES.  Those games are beat-em-ups and consist of nothing but moving to the right and smashing robots until the screen lets you progress a little further.  It might be thrilling for the first two or three levels, but midway through the game the energy starts to wear off and you’re sort of just going through the motions.  Only the boss battles really spice things up (and those games had some SWEET boss battles).

So that’s sort of what this fight with Stockman’s robots was like.  After a while, even when there’s tension in the story and some kinetic layouts, it begins to get a little tedious.  It doesn’t help that we had very recently seen the Turtles fight Mousers and Flyborgs at the conclusion of “Attack on Technodrome”.  Now we’re seeing it again at the conclusion of “Vengeance”.  Add in what I said last review about the writers repeating the whole “the lair is being invaded!” shtick and I think this pony could stand to learn a few more tricks.

Also, while I thought all the two-page spreads and splash pages looked pretty, they inevitably feel like fluff to stretch the issue’s thin story across 22 pages.  That also leant to the monotony of seeing the Turtles smashing robots over and over again.

I’ve been enjoying “Vengeance” quite a bit; it’s an important story culminating from years of buildup and I love it.  However, I get the feeling they began the arc maybe two issues too soon.  Now we’re starting to see that they didn’t quite have enough material to cover 6 issues (more like 8 issues if you count the Free Comic Book Day installment and consider that #50 will be double-length).

We’re sort of lingering in the doldrums right now.  Maybe if they’d buffeted “Attack on Technodrome” and “Vengeance” with a two-parter then this arc might have felt a bit more economical in its final act.  But then, that would disturb IDW’s rigid “4 issues per trade” formula so I guess the opportunity was never really on the table.  (Though I WOULD like to see a return to two-part stories sometime in the future, ala “Sins of the Father” and “Blood Brothers”; not everything needs to be a 4 or 8-issue arc.)

I know it seems bizarre to say that an all-action issue was dull, and hopefully I explained my lack of enthusiasm succinctly above.  But if you really want to experience getting fatigued to death by dull action, pop in one of Michael Bay’s 3-hour Transformers films.  By about the 2-hour mark, you’re pretty explosioned-out.

Grade: C (as in, “Can’t ignore that I spoke too soon in my last review about Hun being written out of the story.  Looks like he’ll be hanging in there”.)