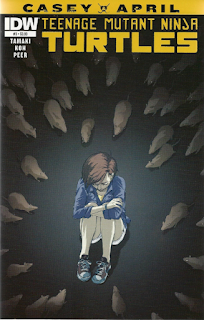 The Rat King dines on spare ribs with his bird-like sister, regaling her with the Greek myth about the labyrinth and the Minotaur.  His sister is less interested in the monster of the story and more impressed with what it says about the human spirit and will to survive. 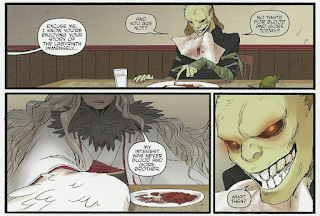 In the labyrinth, April is lost in darkness.  She tries to map out the walls in her head to gain her bearings, but the architecture is spatially impossible.  Suddenly, she sees a vision of herself as a child, giving up on a book report on birds because the subject is too difficult.  Her father reminds her that quitting when things are hard will not only let herself down, but everyone else, too.  April is inspired by the memory, then passes through a wall and plummets into the abyss.

Outside, Casey has arrived at the trailer and is herded through the door by a mischief of rats (I looked that up!).  He soon finds himself navigating the dark passages of the labyrinth and hears clopping hooves and snorting breath approaching him.  Casey eventually stumbles upon a vision of himself as a child.  He’d just been beaten up by his father and is trying to talk tough into a mirror.  Casey pursues the vision. 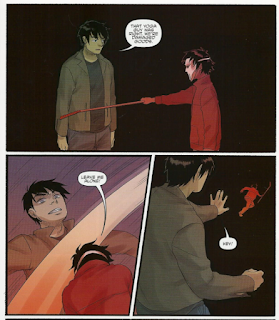 April eventually winds up in the Japanese mansion hallway she started in and sees a message: “The only way out is in.”  She then hears Casey’s voice and passes back through the wall.  The two spot each other, but are impeded by a wide gulf spanning the abyss with only a path of flimsy stalagmites bridging the way.

Casey tries to cross and the two make up for their earlier fight.  Halfway across, the rocks begin to crumble.  April then begins crossing her half and meets him in the middle.  She tells him about the message she saw and suggests that they both jump into the abyss together to see what’s inside. 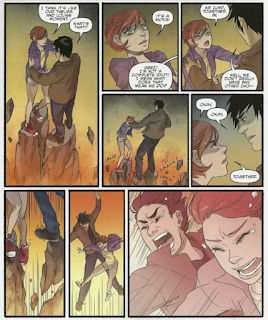 They dive into the darkness and land in what looks like a kitchen.  Standing before them is the Rat King, who is happy to greet them.

*This issue was originally published with 2 variant covers: Regular Cover by Koh, and Subscription Cover by Marley Zarcone and Ryan Hill.

Casey & April is gearing up a bit, but still rather incrementally.  Tamaki and Koh are going for the decompressed, atmospheric approach, but for as much as that works, it also comes with an equal array of setbacks.

I don’t think it’s too off base of me to suggest that their style of storytelling is “manga influenced”.  It’s sort of obvious.  But what works in a Japanese comic doesn’t necessarily work in an American one, and I’m not talking in terms of themes, visuals or anything like that.

Manga can afford to decompress the hell out of the story because a tankoban volume is over a hundred pages per installment.  It has room to take its time.  It’s also black and white, published on newsprint-quality paper and priced to match the production values.  Seven bucks can get you 100+ pages of story.

But American comics aren’t made that way, at least not this one.  We’re looking at 20 pages a month, four bucks an issue.  It is a LIMITED medium they're working with, and an overpriced one, so they need to put as much content in there as they reasonably can.  Even when this all gets collected, the end result is going to be 80 pages MSRPed at $19.99.  Are you getting your money’s worth with this storyline?

It’s apples and oranges; the “manga” approach does not fit American comic books.

And it’s a shame, because there are some interesting story elements going on in here.  The labyrinth/Minotaur angle offers some creepy stuff, relating back to how all the members of the Pantheon are based on mythical entities.  Ultimately, the set piece isn’t used to its fullest potential, as it amounts to nothing but black, empty space for the characters to wander in.  Pair the empty panels with the simplified design aesthetic for the characters and I’m left wondering how this comic could take a month to produce.

The mention of the Minotaur had me hoping to see the return of Chi-You from the recent TMNT/Ghostbusters crossover.  He was left floating in the void of space at the end of that arc, so I was halfway hoping he’d turn out to be the Minotaur chasing Casey in the dark abyss (albeit Chi-You is Chinese, not Greek, but he’s still a bull-headed Minotaur-like creature).

If I’m reading the art right, though, the cloven-hooved, snorting creature chasing Casey in the darkness turns out to be a bunch of generic demon-monsters (vision-Casey swings his hockey stick, briefly lighting the darkness, revealing a bunch of horned beasts).  If that’s the case, then it is a little strange that they’d make a comic about the Pantheon, set-up a bull-headed monster in the darkness and NOT have it turn out to be the bull-headed member of the Pantheon.  There’s still an issue to go, though, so I could very well be wrong.

Tamaki goes for more trite symbolism as the characters see visions of their younger selves overcoming adversity which gives them the will to carry on, to say nothing of the “riddle” that April has to figure out.  It’s all very obvious, much like that dumb heart-shaped rock from the first issue, and doesn’t feel like there was too much thought put into it.

The dialogue between the two leads, as well, is a clumsy thing to read.  They seem to talk at one another in bizarre fragments and nothing in their exchange approaches a conversation.  While I suspect the intent was to show how awkward their reconciliation was, the dialogue gets a bit TOO fragmented at points.  April says, “I don’t know.  It looks.  Tenuous.”

I think there’s one too many.  Periods.  In there.

Look, I know I’m coming down pretty hard on this thing and I haven’t been very supportive since the title began.  I’m not trying to be vitriolic with my criticisms, it’s simply that much of this comic feels very clumsy and maybe even a little amateurish.  IDW was going for something different and it’s always a good idea to experiment, but they can't all be winners.  Doesn’t mean they should stop trying to test the waters with different genres and fresh talent or anything; I just don’t think Casey & April is hitting the mark.

At the core of this book there is an interesting story; horror elements, an exploration of the Pantheon, development of two characters whom the ongoing had been neglecting and set-up for the new storyline once “Vengeance” is finished.  The execution, the presentation, is what is bogging down those interesting aspects and rendering what ought to be an exciting, spooky tale into a tedious bore.

Grade: C- (as in, “Casey & April… I keep typing the damn thing as April & Casey on instinct because, you know, A comes before C and all”.)