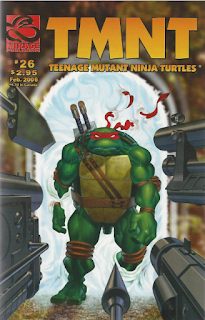 On the Styracodon homeworld, a secret bunker operated by a trio of Triceraton Commandos observes the landscape above.  The Commander sees Michelangelo on one of their hidden cameras and recognizes him from a long time ago.  He decides to act before the Styracodons get to him first. 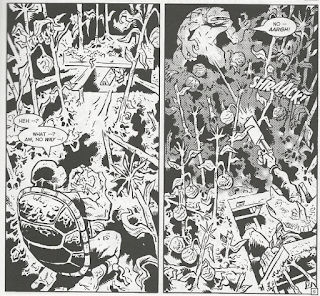 Mikey, meanwhile, is still on the run from the prison guards.  He makes it to some old farmlands and tries to eat a few dried out vegetables he recognizes from his prison mush.  Just then, a trap door opens and the Triceraton Commander pops out.  Before Mikey can react, the Triceraton stuns him with a laser and drags him into the bunker.

On Earth, the Guardifriend continues trying to drown Shadow in the river.  Luckily, Metalhead shows up in the nick of time.  He pulls Shadow from the water and destroys the Guardifriend with his hair tendrils.  The Guardifriend tears off a chunk of hair in the skirmish, but Metalhead reattaches it.  Metalhead and Shadow then head back to Stainless Steve Steel’s farmhouse for reinforcements. 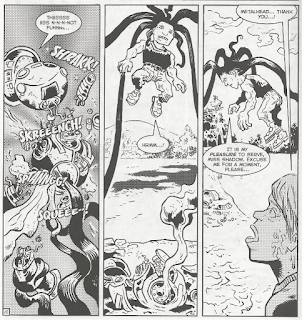 In another dimension, Leonardo’s liquid portal opens and he steps through.  The portal returns to a puddle of tap water, which Leo carelessly leaves behind on this alien landscape.  A weird deer-thing takes a sip of it and freaks out (is this relevant?  I don’t fucking know).  Leo continues to explore the dimension: A dense jungle of ruins and strange animals.

Leo comes across an alien creature named Jorut, who speaks a language he can’t understand.  Jorut hits him with a Balponagu, a mosquito-like insect whose sting allows the victim to understand all languages.  Jorut introduces himself as an official greeter for the Battle Nexus, tasked with seeing that all visiting warriors find their way to the arena and understand one another. 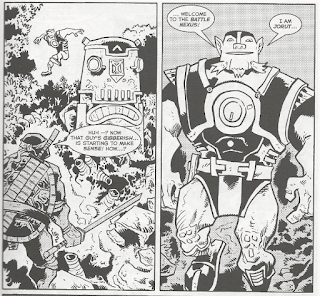 As they walk, Leo explains that he was not invited to the Battle Nexus, but came after finding instructions left behind by his master.  Jorut is familiar with “Hamato Splinter” and recalls a few of his Battle Nexus matches, including his fight with “Thotan”.  Along the way, Leo wanders onto a platform and is suddenly surrounded by six armed aliens, all of whom want to fight him.

This… oh, this was a tedious issue.  So much of the story involves the characters wandering around and talking to themselves, describing everything they’re doing in clumsy, excruciating detail.  Three freakin’ pages of Michelangelo eating space-corn and describing the texture and flavor to no one in particular.  And Leo… he’s just… plodding through the jungle, contemplating the tap water he left behind and then spending a whole page describing what it’s like to drink water.  TO DRINK WATER. 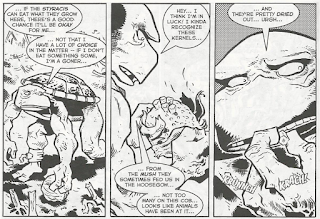 WHO are these characters talking to?  This is the kind of stuff better suited to an inner monologue; a thought balloon.  How the hell are the Teenage Mutant Ninja Turtles supposed to function as ninjas when apparently they talk loudly to themselves wherever they go?  No wonder the Triceratons and Jorut got the jump on them.

And the stuff they TALK about isn’t even remotely interesting.  Corn… water… why do we need to be reading this stuff?  And for three pages?  What takes Mikey three pages to contemplate and accomplish regarding his meal could have been covered in two panels and a thought bubble.  “Boy, I’m hungry.  Can I eat this?  Looks like the stuff in my prison food, so I guess so.”  There.  That is length and breadth of the content contained within Mikey’s meandering drivel.  But we get to suffer it for three damn pages. 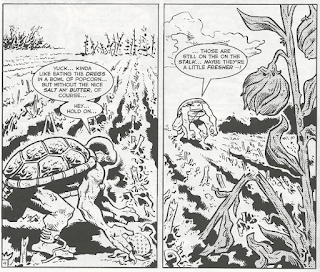 It makes it hard to tell just what is significant and what isn’t in this comic.  Was the alien-deer sipping Earth tap water and freaking out of some narrative value?  Or was it just worthless bullshit like Leo taking 8 panels to sip water from a stream?  Was Metalhead reattaching his hair a plot germ that will bear fruit issues later?  Or was it just something that was there for no other reason than to BE there?

And beyond all that boring filler (and that’s what it is: FILLER.  Three pages of eating corn is FILLER), this issue has a bunch of lettering errors in it.  Sound effects aren’t italicized (making “Groan” sound like the name of a Triceraton), words in sentences are repeated (“Those are still on the on the stalk”), and words are misspelled (“If I don’t eat something some”).  This issue also features one of the worst abuses of the ellipses in all of Volume 4.  So much pointless dialogue and practically none of it ends with a period.  Characters are constantly rambling… rambling… rambling… even when they’re making declarative statements… and not talking to themselves… they still can’t use a period… 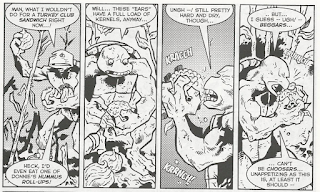 But alright, let’s talk about something else.  The Battle Nexus!

We’ll learn more about it in an issue or two, but in case you don’t remember, the Battle Nexus actually originated from the 4Kids TMNT cartoon that was airing at the time this comic was being published.  Since Laird had such a direct hand in grooming that show, he evidently felt no hesitation about adopting ideas from it for the Mirage comics.  Lots of 4Kids concepts would show up in Volume 4 and Tales Volume 2, from the Foot Mystics to Hun, but the Battle Nexus seemed like one of the biggest inclusions.

If this is the SAME Battle Nexus from the 4Kids cartoon, I don’t think we’ve ever found out.  With the Turtles all existing in a multiverse, where alternate versions of themselves can crossover and interact (as per Turtles Forever), you’d think there’d be only a single Battle Nexus.  But who knows, maybe there’s more.  I guess if the Turtles all have alternate versions of themselves across the multiverse, then the Daimyo and his court can have duplicates, too.  But again, we don’t know.

I’m trashing this issue pretty hard, but in all honesty it is not a good comic.  How someone can script three pages of Michelangelo eating corn and think “this is the Ninja Turtles story that NEEDS to be told!” I’ll just never understand.  But about six pages of content happen in this issue and the rest is filler.  Water-sipping, corn-chewing FILLER.