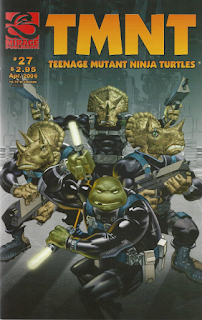 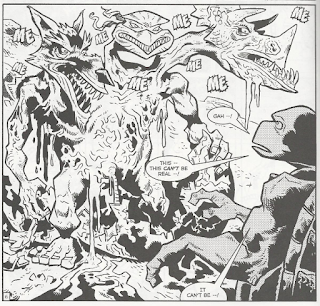 He wakes up for real inside the Triceraton bunker.  The Triceraton commandos (Commander T’Zirk, Zovokk and Zorkk) have healed his wounds and also planted a device in his throat that will allow him to breathe varying atmospheres.  Mikey assumes they’re going to bring him back to the Triceraton Homeworld to face “justice” for his crimes.  T’Zirk has no such intentions and merely demands a debriefing of how he got to the Styracodon Homeworld. 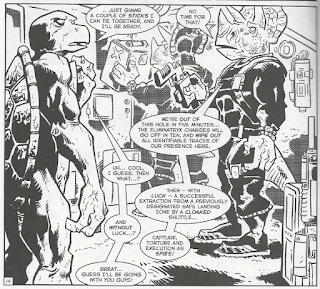 Mikey tells his story and the mention of Azokk stops the commandos cold.  T’Zirk orders their mission aborted and tells his commandos and Mikey to prepare to evacuate the bunker and meet their prearranged transport.  Mikey is hesitant to join them, but hasn’t any choice.

At the Xihad compound in Northampton, the shrunken Donatello navigates the floor in search of clues.  He finds stacks of the Guardifriend dolls, all in retail packaging.  Before he can figure out what the deal is, he’s spotted by one of the rednecks, who takes him to the smiling alien, Mr. Yogu.  Yogu plans to dissect Donnie to see what makes him tick, inciting the Turtle to call for back-up.  The mutated Raphael then bursts through the wall and clobbers everybody. 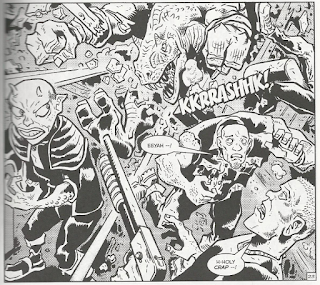 Yogu escapes to the roof, but sees that the compound is surrounded by cops.  Before Raph can nab him, Yogu attaches organic wings to his back and flies away.  The cops call in air support in the form of Officer Raptarr.  Raptarr defeats Yogu in aerial combat and grounds him. 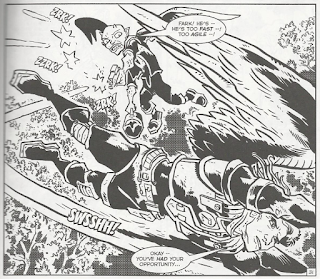 In the Battle Nexus arena, Leonardo is faced down by the six warriors.  As per Battle Nexus rules, Jorut cannot assist him and he must win on his own.  Leo handily takes down the warriors, only for the fight to be interrupted by a giant, monstrous deer-creature (mutated by the Earth tap water Leo left in the forest).  Leo has his hands full with the monster when suddenly a mysterious warrior appears and defeats it.  Much to Leo’s shock, the warrior appears to be… 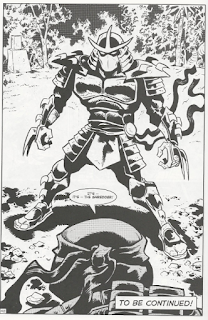 *Michelangelo and the other Turtles committed "crimes" on the Triceraton Homeworld in TMNT (Vol. 1) #6.  They'd have several nasty encounters with the Triceratons after that.

This was a massive step forward from the dreary, doddering issue that came before it.  There’s plenty of action and forward momentum (or what passes for it in Volume 4) and while the dialogue is still atrocious, the energy offsets that negative.

The Stan Lee style “captioned” dialogue, as I’ve mentioned before, is one of the worst elements of Volume 4.  I thought I could get used to it, but it seems to be doing its level best to ruin tension and suspense with infuriating prattle.

Mikey’s nightmare is supposed to be frightening or at least suspenseful, but he’s constantly describing everything.  He has to tell us that the chain is buried in the sand when we can SEE it.  He has to tell us that it is shackled to an egg when we can SEE it.  The whole “egg” thing, too, is framed as this dramatic reveal, but the bizarreness is muted when Mikey is obnoxiously describing the artwork to the audience.

Are these comics captioned for the blind or something?

I do rather like these Triceraton commandos, though.  There’s an informal, chummy attitude amongst them, even when they speak to their commander, and it gives a nice counterbalance to previous portrayals of the dino-aliens.  They’re usually portrayed as snarling, violence-hungry thugs, so any opportunity to see a different perspective is more than welcome.

Mikey also gets an “upgrade” in this issue; he can now breathe any number of alien atmospheres.  Last issue, Leo got an “upgrade” that allows him to understand any alien language.  So even the two Turtles that weren’t obviously physically altered over the course of Volume 4 did receive subtle changes or extra abilities setting them apart from their brothers.

The stuff with the Xihad was a cute bit of “Incredible Shrinking Man” stuff.  However, whether Laird intended it or not, a shrunken Donatello being comically chased by a cat is about as close to the Fred Wolf cartoon as it gets.

So the smiling alien FINALLY has a name, which will save my fingers some key strokes in the future.  Also, Raptarr is back, but who really cares?  I don’t think he’s anybody’s favorite character and he certainly hasn’t done much since his introduction in Volume 4 a million years ago.  I guess we do find out that he’s a police officer in this issue, so that’s something.

The Battle Nexus fight was an okay moment and the only action sequence not smothered in play-by-play narration.  The characters do talk up a lot of “Silver Age” smack, as they clumsily describe their special attacks before they launch them, but I get that it was an intentional homage.  And then there’s the “Shredder” that appears at the end, which was a thrilling cliffhanger at the time.  I’ll talk more about him next issue.

Anyway, this issue was a nice turnaround from the last.  Its 42 pages, which is pretty long, though as I’ve stated before, this is not an economical comic so the “length” breezes by in a flash.  The comic’s problems remain the same and after 27 issues I’m a little disappointed in myself for not growing a callus to them.  It’s just those damn ellipses, man…

THERE THEY ARE AGAIN!