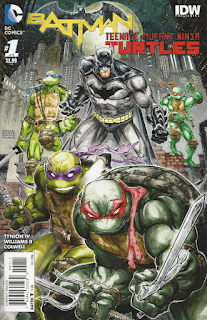 “Knights in a Half Shell”

In Gotham City, Batman investigates an attack on a Powers Industries laboratory.  A band of ninja and four green monsters apparently stole an experimental generator.  It’s the fourth attack/theft on a major research facility since the abduction of Dr. Naveen Khan, a famous theoretical physicist.  Hearing the testimony from one of the lab technicians, Batman decides to investigate further.

Meanwhile, the "four green monsters" order a pizza and sneak it into the sewers after the delivery guy sets it on the ground. 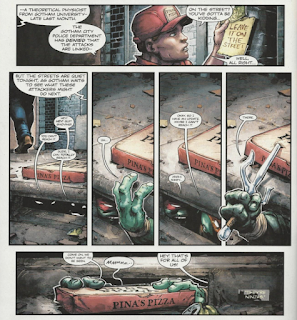 Down in the Batcave, Alfred is worried that with the anniversary of his parents’ death approaching, Bruce Wayne AKA Batman (spoiler alert) will be going into one of his “moods” again.  Indeed, Bruce is working on the Intimidator, a high tech suit of battle armor and ignoring any pleas to summon the rest of the Batfamily back to Gotham for support.

Changing the subject, Bruce tells Alfred that the injuries inflicted on the lab technicians are consistent with injuries from ninjutsu fighting styles.  Alfred suggests that if ninja are involved, then perhaps it is an attack from Ra’s Al Ghul and the League of Assassins.  Bruce dismisses the idea, as it just isn’t the League’s style to use only one martial arts technique.

Donning his costume, Batman heads to the Wayne Enterprises R&D facility in the Batmobile, asking Alfred to call the GCPD and decline their offer of police protection for the building.  He’s certain the ninja clan will strike there next and doesn’t want the police interfering.

Down in the sewers, Killer Croc is following a GPS signal following the Batmobile.  Croc and his gang know that Batman is going to investigate Wayne Enterprises and they’ve no interest in stealing anything from that place.  Rather, Croc wants to strip the Batmobile for parts, as its high tech doodads would go for millions on the black market. 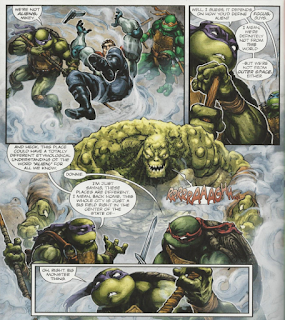 Along the way, they stumble across a sewer lair that looks like a teenage hangout.  Croc orders his men to find and kill the occupants before they can squeal to the cops.  Those occupants are, of course, the Teenage Mutant Ninja Turtles, and they beat the hell out of the thugs and Croc.  Donatello ponders how different this dimension is from their home universe and wonders how they’ll ever get back.  Raphael insists that the only way they’re going to get home is to track down the Foot Clan and not let them get away again.  Leonardo suggests they keep their cool and continue searching, a strategy which Master Splinter agrees with.  Michelangelo, however, is upset that Croc destroyed his video games.

At the same time, Batman catches the Foot Clan red-handed as they try to steal a signal amplifier from Wayne Enterprises.  Batman takes all the ninja down and interrogates the last one standing.  The Foot Soldier tells him that they are the Foot Clan and they only want a means to get home.  Batman asks about the four metahumans that have been seen with them, but the Foot Soldier only gets out the word “turtles” before he is killed by shuriken. 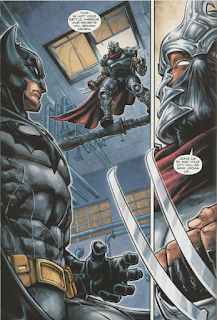 Batman looks up to see the Shredder staring down at him from the catwalk.  The Shredder warns Batman to stay out of their way then throws a smoke bomb.  When it clears, all the Foot Soldiers and the Shredder are gone.

Outside, the Turtles emerge from a manhole and stumble upon the Batmobile.  Donnie is entranced by the vehicle, but Michelangelo warns him that it may be taken.  Batman swoops down from the rooftops and sees the "turtles" the Foot Soldier was talking about…

*This story is continued in Batman/TMNT #2.

*According to IDW editor Bobby Curnow, this miniseries is not a part of the IDW TMNT canon.  However, the Turtles who appear in it are “inspired by” the IDW TMNT.

*A special Director's Cut edition of this issue was released by DC in September of 2016.

Okay, before I talk about the issue, I want to talk about DC’s marketing for it.  Namely, this: 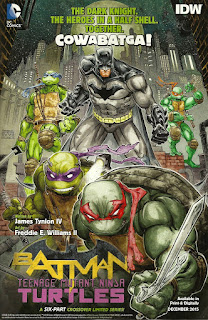 “Cowabatga”?  And I thought Image’s marketing for the TMNT was embarrassing.

Now anyway, can I say that this surprised the Hell out of me when it was announced?  I mean, yeah, because really.  Batman meeting the Ninja Turtles?  That came out of left field.  Even the Ghostbusters crossover wasn’t quite so shocking since IDW held both licenses so it made a little bit of sense.  But BATMAN?  Not in a million years.

The Turtles have crossed over with a LOT of different franchises and licenses over the years, even before they achieved major media popularity in 1987.  But this is easily their most mainstream crossover ever.  I mean, Usagi Yojimbo and Cerebus are big deals in the world of indie comics, the Wild West C.O.W. Boys of Moo Mesa had their own Saturday morning cartoon, and the Ghostbusters are major motion picture stars… but Batman is BATMAN.  That’s a big fuckin’ deal.

So to see the Turtles meeting Batman, outside of those weird unsanctioned Russian comics that we should probably forget about, is a bewildering treat.  Like Fanfiction.net and DeviantArt just sprang to life and started charging $3.99 a month.

My love of TMNT is no secret, but I’m also a relatively enthusiastic Batman fan.  I’ve written articles about Batman over at AIPT (including a couple trade paperback reading orders of my best estimation) and I’ve read countless pages of comics.  The Dark Knight duels with Swamp Thing for the spot as my favorite DC Comics character, and probably edges a lead since I’ve read ten times as many Batman books as I have Swamp Thing (if only because DC hasn’t reprinted most of Swampy’s library).

So just like TMNT/Ghostbusters, Batman/TMNT is a crossover that hits me right in the wheelhouse.  Its two great tastes and so far they taste pretty great together.

My knowledge of more recent Batman comics is a little behind; I stopped at “Death of the Family” and haven’t gotten into “Zero Year” yet.  I also haven’t read any recent Bat titles that aren’t from the Scott Snyder/Greg Capullo run.  This whole New 52 business is off-putting to me, sorry (though I enjoyed the “Court of Owls” arc).

So with that in mind, I’ve no prior experience with Tynion or Williams, though I understand more dedicated readers of DC’s contemporary output are familiar with them.  As a first impression, however, I’m rapidly becoming fond of them both.

Tynion’s Turtles get less exposure in this first issue than Batman does, but the title is “Batman/TMNT” with the Dark Knight coming first.  So the impression I got is this is going to be from Batman’s POV primarily, which works with him being “The World’s Greatest Detective” and having to piece the plot together for the reader.  If it was the TMNT’s POV first, then we’d already know everything in the first few pages because they’re the ones invading Gotham and trying to find a way home.

But from what I can tell, he obviously has their attitudes down.  Maybe he overplays their clichés a bit; Donnie loses focus during the fight with Croc to prattle ponderous exposition and Mikey won’t stop whining about his My Little Pony spoof video game.  But to be fair, Batman gets equally Flanderized, with Alfred going on about how his parents were killed in Crime Alley and how he’s become a dark, brooding avenger of the night, etc.

Oddly, it was Tynion’s Killer Croc that I liked the most.  I really didn’t dig what had been happening to Croc around the time of “Hush”, where Jeph Loeb and Jim Lee had turned him into a mindless, snarling monster.  That sort of “characterization” is horrendously limited and a major regression from the competent mobster he was in the ‘80s.

So it’s good to see him get his faculties back, with a scheme that was actually sort of inspired in how relatively mundane it was.  And he even lets his thugs talk back to him (to an extent) without going all “RAR GONNA EAT YOU!” because he isn’t a braindead monster.  Sorry to go off on a Killer Croc-related tangent, but I like to see him written with two brain cells.

Williams, well, every time I was about to type something regarding his art, I wasn’t sure if it was his doing or the work of the colorist, Colwell.  The two look superb together and there are these little nuances in their techniques that make this comic stand out visually.  The characters all have these white outlines around them that on the surface kinda makes their figures look “pasted” onto the pages, but also keeps them from getting lost in the backgrounds.  Williams doesn’t skimp on any of the environmental details, so it would be easy for the characters to get confused with their surroundings without those outlines.

IDW editor Bobby Curnow said that this miniseries is only “inspired by” the IDW Turtles and not a part of that universe, and you can see it in the character designs.  The Turtles, Splinter and especially Shredder are all drawn with their IDW models (the Turtles have Santolouco’s unique bandana shapes, Shredder has the scarf, etc.).  From a narrative standpoint, I’m not sure why this comic isn’t part of IDW canon since it seems rather nonintrusive to the IDW universe so far, but things could change.  Likely, it’s more a matter of licensing and reprint rights; IDW would have to pay DC every time they wanted to reprint this story so it’s just easier to say it “doesn’t count”.  Whether it “counts” or not, however, should be immaterial as to whether it’s “good” or not.  And it’s pretty good so far.

Grade: B (as in, “But maybe this will lead to Rocksteady making a TMNT game in the vein of the Arkham series.  Because I’d just be amused by the prospect of ROCKSTEADY making Ninja Turtle games, if nothing else”.)