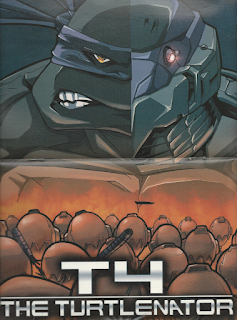 Taken from: TMNT Volume 2: Out of the Shadows
Publication date: 2007

Dreamwave’s TMNT comic ended at issue #7.  However, Peter David had completed the script for issue #8 and had plotted issues #9-10 prior to cancellation.  Lesean Thomas had also completed rough pencils for part of issue #8.  The available material was collected by Titan Books for their TMNT Volume 2: Out of the Shadows trade paperback.

(Script and rough pencils completed for most or all pages)

Although the Teenage Mutant Ninja Turtles previously succeeded in destroying PIT, the super computer built by Baxter Stockman to manufacture his Mousers, the machine has gained sentience and sworn vengeance. 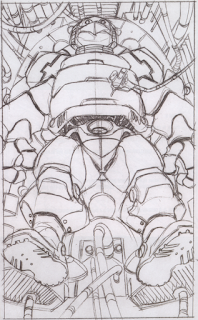 Collecting all the data gathered by its Mouser “children” during their previous battles, PIT creates T4 – The Turtlenator, a robot duplicate programmed to hunt down and destroy the Ninja Turtles.  After training the robot, PIT sends it on a mission to avenge its "brethren". 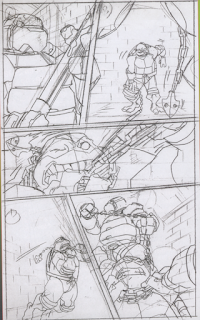 T4 begins its search with the sewers and spies Michelangelo waving goodbye to April as she exists a manhole.  Once April leaves, T4 descends into the sewers and attacks Mikey.  Subduing him with its chain and cutting him with its scythe, T4 analyzes Mikey’s blood and determines it has learned everything this particular Ninja Turtle has to teach it.  And so, T4 prepares to kill Mikey.

The other Turtles arrive in time to save Mikey.  Donatello, having studied the Mousers after their last encounter, uses a device that creates electrical feedback to severely damage T4’s programming.  T4 retreats as it begins to biologically assimilate Michelangelo’s DNA.

The malfunctioning Turtlenator, now looking organic, escapes to the surface.  Cut off from its wireless connection to PIT, its memory banks tell it that April O’Neil is an ally, so it heads to her apartment for help.  April, thinking T4 is one of the TMNT she hasn’t met, lets it in and takes care of it.  Over time, T4 develops a sense of trust toward humans.

Later, T4 overhears the Purple Dragons committing a robbery and stops it, making no attempt to stay out of the public eye.  Reporters and gawkers then praise T4 as a superhero in a “frog” costume and T4 proceeds to publicly fight crime over the next few weeks.  The Turtles, observing all this on TV, are mortified, as the new Ninja Turtle is blowing their cover.

The Turtles inform April that T4 is not one of their brothers, but an evil robot.  April encourages them not to attack the robot, as she believes it is capable of learning and changing.  With T4 about to receive a medal from the city for all its good deeds, April assures them that it has learned right from wrong.

The Turtles watch the ceremony in secret, but just as T4 is about to get the medal, PIT regains control of the robot and causes it to go berserk.  Don uses his feedback machine to try and stop it, blowing open a chest compartment and revealing to the public that T4 is a machine.

PIT won’t let T4 be defeated the same way twice and regains control.  T4 chases the Turtles through the alleys and along the rooftops, besting them in combat at every turn.  Eventually, T4 is about to execute one of the Turtles when April intervenes.  She gives a speech about “who you really are” and T4 hesitates, unable to strike.  The Turtles use the momentary opportunity to destroy T4.

Later, Don sends an e-mail virus to a Stocktronics employee.  The employee, opening the e-mail, infects all of Stockman’s computer systems, including PIT, wiping the AI from existence.

*This material covers the issues that would have followed TMNT (Dreamwave) #7.

*The Turtlenator, known as the Turtlebot in the cartoon, toyline and Konami video game, appeared in the 4Kids TMNT episode “What a Croc”.

*The bonus material in this volume also included a sketch and character model gallery, rough pencils on selected pages and rough cover art for released issues.

I thought I was done with Dreamwave’s revolting TMNT comics, but then a fan sent me the bonus content from Titan’s trade paperback collection.  I pride myself in being thorough, so here we are.  Special thanks to Adam Winter for sending me the stuff, but you’ll understand if I don’t I send you flowers.  These comics are bad.

The bonus content related to the T4 storyline is mostly just summaries and script excerpts; there are only 5 pages of rough pencils to look at.  As much criticism of Lesean Thomas as I’ve made in the past, I will say that his pencils look a lot better in the rough stages than how they wound up appearing in the finished comics.  Dreamwave’s coloring style evidently did him no favors whatsoever.  That said, there isn’t really a lot to judge; it’s just five pages of roughs.

Peter David’s plot summaries sound about as ho-hum as possible.  This is a story we’ve seen done a thousand times over; it’s the whole “can robots learn to love?” bullshit.  We have an artificial monster that starts out wanting to destroy, relents and ultimately is destroyed itself by the new sense of “compassion” its logic circuits cannot quantify.

David is a great comic writer; one of the best.  I love almost all his stuff.  But hoooooo-ly shit, he was phoning this book in long distance.  None of those plot summaries sound even remotely original, with every twist and turn boorishly telegraphed.

As for T4 – The Turtlenator, I think I liked him better as the Turtlebot, which was his more prominent name.  He was a one-off opponent and facilitated a good fight scene in his episode, made for a well-sculpted action figure and provided a decent-enough boss battle in a video game, but that’s about all he was ever good for.

T4, I guess, tries to go a route a bit closer to Metalhead from the Fred Wolf TMNT cartoon; the robot Turtle programmed with the thought patterns of the TMNT and built to destroy them, but eventually starts to learn right from wrong.  However, even the Fred Wolf cartoon didn’t play it this close to the clichés and Metalhead’s single head-lining episode was actually pretty fun.

Anyway, it probably isn’t fair to judge these stories based on paragraph plot summaries and rough art, but I’ve already endured the seven completed issues that were published.  So call my estimation of their potential quality an “educated guess”.  It just would’ve been more hackneyed plots, amateurish art and atrocious coloring.  Be thankful the series ended at #7.