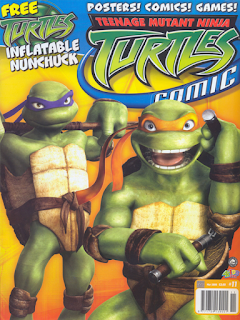 "Two Heads are Better than Three"

High above Manhattan, a police van is carting Triple Threat off to jail yet again.  However, one of the cops pulls out a syringe and knocks the driver out.  The bad cop turns off a holographic disguise and reveals himself to be Shade, Triple Threat's biggest fan.  Shade never got over how Raphael beat him for the championship belt and wants to help his hero get revenge.

At Cody's lab, the Turtles are hanging around as Cody makes yet another attempt to get his time window working.  There's an explosion and when the smoke clears, Raphael and Michelangelo are fused together!  Apparently it had something to do with the space-time continuum or whatever, but Cody thinks he can fix it.  In the meantime, Raph and Mikey "enjoy" one another's company. 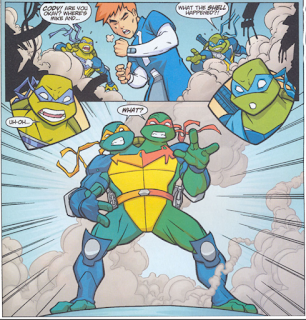 Later, Cody assembles all the equipment needed to separate Raph and Mikey, but before he can throw the switch, there's a crash and half the power goes out.  The police van has smashed into the side of O'Neil Tech, disrupting the power flow to the lab. 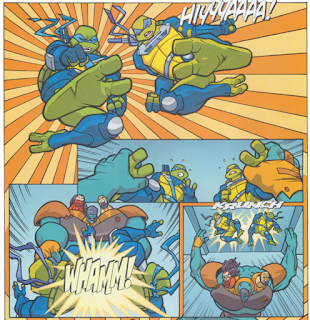 Triple Threat and Shade invade the building and Leonardo and Donatello quickly engage them in battle.  However, the two Turtles alone aren't enough to defeat Triple Threat and they're quickly taken out of the fight.  Luckily, Raph/Mikey show up and use the cooperation skills they've learned to evade Triple Threat's blows and land an uppercut on one head that starts a chain-reaction, bonking all the heads together and knocking the wrestler out.  Shade attacks, but is easily taken down by one of Mikey's nunchakus. 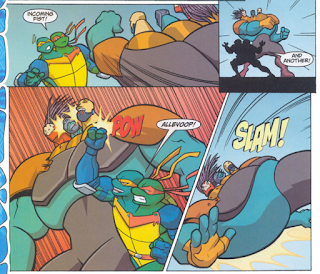 Still later, Mikey and Raph are successfully separated and Triple Threat and Shade are carted off by the police.  Donnie asks if the two Turtles learned anything in their time sharing a body, but all they've learned is how much they can't stand each other.  As Raph and Mikey fight, Shade vows to get his revenge.

*Shade was created by Sarah Palmer, the winner of the "Bad Guy Competition" promotion.

*Throughout the course of this series, the coloring studio's name has been alternately parsed by the credits as "Hi Fi Design", "HiFi Design" and "Hi-Fi Design".  I don't know which one is correct and I don't care.

Triple Threat... Not exactly the best Fast Forward villain, was he?  Granted, Fast Forward wasn't spoiled with much of a rogues gallery, but Triple Threat ranked near the bottom.  Just a big strong guy with three heads, there isn't much TO that, is there?

This story is less a showcase of the villain and more a reward for the contestant who won the competition to have their original villain appear in a TMNT comic.  Check it out: 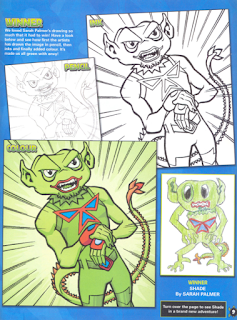 Heh.  There were also three runners up, and they got to see their drawings re-rendered by Andres Ponce.  It was a cute promotion and a lot of fun to see a professional artist try and rework the drawings of a child into something threatening.  Shade was definitely the weirdest of all the submissions shown in the issue, this bizarre gremlin-looking thing, so I'm glad he was the winner.  Admittedly, he doesn't do much but spring Triple Threat, but it was a nice gesture.

Actually, I wonder if this comic was originally written to feature the unnamed shape-changing alien that appeared in Tristan Jones' story from TMNT Comic #1.  Shade was probably just plopped in there because it was an interchangeable role that would suit the competition.

Well, whatever, the story is as brisk and forgettable as anything else published in TMNT Comic.  Mikey and Raph going all Two-Bad from Masters of the Universe was a neat visual, and Andres Ponce provides some nice art, but it's still a sort of throwaway adventure.

And it'll probably be the last one of these I ever review.  I don't have TMNT Comic #12 and #13, so I can't provide summaries or reviews of those issues.  I found the covers online, so I made up some placeholder articles, but I guess I'll never know what happens in them.  I'm not losing any sleep over it.