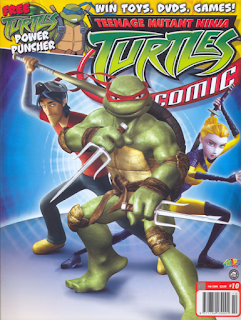 Upper Manhattan.  Divisional Law Enforcement Precinct 13.  Michelangelo is in hot water for using vigilante tactics to "aid" in the capture of a bad guy.  The Police Chief wants to press charges against Mikey for interfering with an arrest, but Splinter and Cody manage to convince him to let Mikey off the hook so long as he participates in a ride-along to learn proper police procedure.  Donatello, on the other hand, wants to join so he can film a docudrama.

Later. all four Turtles have piled into the back seat of a cop car while Officers Strait and Naru (ha ha ha) lament that they've been stuck babysitting.  The beat is pretty boring and providing nothing good for Donnie to film, so while the officers are out of the car to deal with a streaker, Mikey programs new directions into their beat map. 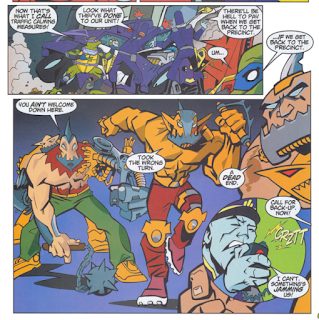 The new beat takes them to the far rougher Old Manhattan where they're immediately assaulted by a gang of alien cyborgs called the Tiger Sharks.  Straight and Naru try to call for backup, but something is jamming their transmission.  The cyborgs trash the cop car, but the Turtles quickly trash the cyborgs (leaving Strait and Naru to do nothing but film the altercation for Donnie's docudrama).  They wonder how a gang of thugs like the Tiger Sharks could get the tech needed to jam police transmissions and Mikey suggests that there may be a bigger brain behind them. 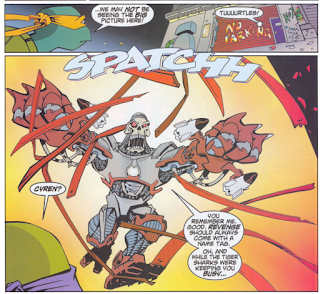 His suspicion proves correct as their old enemies Cyren, Sludge and Crush attack.  Cyren bailed both villains out of the pokey (rebuilding Crush's anti-gravity suit, too) and together they have formed the Triumverate of Terror.  As the Turtles and the Triumverate go at it, Strait and Naru launch a flare.  Backup soon arrives and the Triumverate is taken down with tear gas by the police. 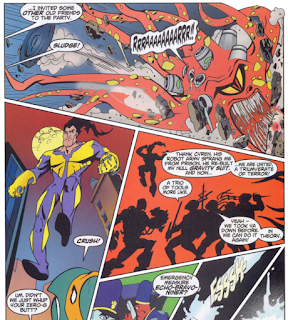 Back at Cody's place, the Turtles, Cody and Splinter watch Donnie's docudrama chronicling their ride-along.  At the end of the film, Donnie concludes that there is still room in the world for traditional peacekeeping and that the TMNT's tactics aren't always the best method... they're just the best method most of the time.

*This issue also reprints the next 6 pages of TMNT Movie Prequel #5: Leonardo with new colors by Hi Fi Design.

This is an issue that could have been a lot more fun than it proved to be.  A team of super villains comprised of comic-original baddies could have been a cool little story, but they don't show up until the very end and are dispersed in just over 1 page.  The ending in which the police take down the Triumverate with riot suppression tactics was a neat twist, but it would have been more rewarding if we'd gotten a longer battle between the Turtles and their foes.  If maybe the Turtles were shown unable to beat the villains using their methods, only for the police to take them down, the lesson about the need for by-the-book peacekeeping would have stood a little stronger.

As it is, we get some power level decay with this story, especially on the part of Crush, who uses his gravity powers only to float a little bit before getting taken down by tear gas.  Pret-ty lame.  Add to that, Sludge is just sort of a mushy thing for Leo to swing his swords at and Cyren shows off a bunch of missiles that he never actually fires (instead blasting lasers from his hands).  It's all very disappointing.

Perhaps most disappointing is that the issue wastes a rather good artist.  John McCrea offers more traditional comic book penciling without the same pared down, cartoonish look that previous artists on TMNT Comic have gone with.  Characters like Cyren and Crush, who looked really dumb in their first appearances, appear a bit more menacing under McCrea's aesthetic.  I bet he could have drawn a pretty killer action sequence if only the script had allowed it.

Also... what exactly WAS the Triumverate's plan?  They didn't lure the Turtles down into Old Manhattan; the Turtles journeyed down there completely of their own volition.  Were they just waiting in an abandoned building on the off-chance the TMNT might wander by?  Well, I mean, it WORKED, but... what're the odds?