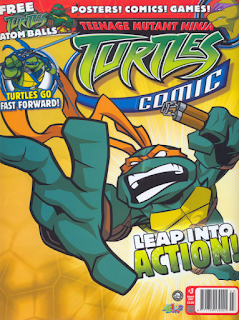 "The Greatest Show in Space"

At Michelangelo's insistence, the Turtles pay a visit to the Martian State Circus.  Everyone's having a good time (save Raphael, who hates clowns) when a purse-snatcher robs a guest.  The Turtles use their martial arts to stop the thief and their display impresses the Ring Master, who asks if they'd be kind enough to fill in for his acrobat who called out from work.  Mikey jumps at the chance and drags his brothers along.  The Ring Master explains that the act involves inviting a plant from the audience into the ring and then "stealing" his wallet. 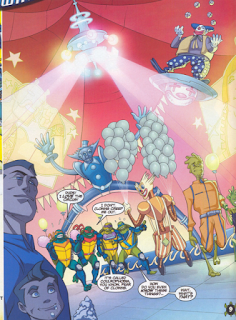 Before the show, the Turtles tour the back lot.  The others aren't so sure about the Ring Master's "act", but Mikey insists that if they're stealing from a plant then they aren't really stealing at all.  They try to interrogate one of the clowns about the circus, but he seems nervous and refuses to talk.

When the show starts, the first act involves an alien named Zorak the Great, who steals the jewelry from a guest with his teleportation magic.  The Ring Master promises that all "stolen" items will be returned at the end of the show.  Next up are the Turtles, who invite the plant down from the audience and then do some ninja moves to distract him while Mikey snags the wallet. 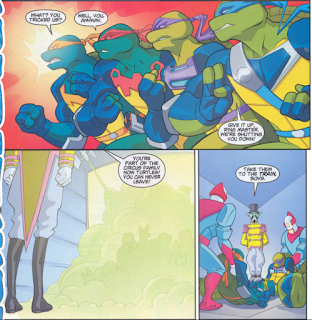 The Turtles awaken on a circus train heading for space, locked up in a sideshow car.  Donatello manages to pry a panel loose and they escape to the engine.  They fight their way past Zorak and several other circus performers, save the clown who insists that he's a captive, too.  The Ring Master proves tougher to deal with, but he's inevitably clobbered by Raphael. 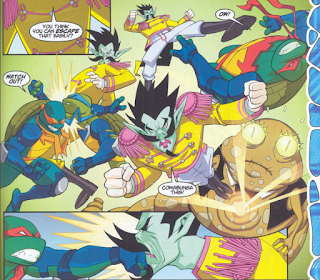 The Turtles turn the Ring Master and his crooked performers over to Bishop, who thanks them for their help.  He then tells Mikey that because he did such a good job on his assignment, the charges against him after the "incident" with the Ambassador from the previous week will be dropped.  Leonardo wants to know what this assignment was and Mikey says that he was ordered by Bishop to take the Martian State Circus down, otherwise he'd be arrested.  Raph repeats his earlier assertion about hating the circus.

This script is full of a lot of conveniences, nonsense and half-ideas that never bear fruit, but I guess you can only do so much with a short strip.

For starters, why bother introducing the good guy clown character if he never contributes anything?  I thought that he was going to land the finishing blow on the Ring Master (he even gets a parting "Take THAT" line), but he doesn't do anything aside from profess his innocence.

Likewise, Raphael constantly groans about hating clowns, but that concept is never actually visited in the story.  The only clown character is a sadsack and Raph never has to actually face any clown-related menaces.

Then there's being locked up in the train car, a dilemma that lasts a whopping one panel.  "Hey, we're locked up in this train car how will we everOH LOOK A LOOSE PANEL WE CAN CRAWL THROUGH!"

The ending twist, that Mikey was in on the mission the whole time, is the only bit of inspiration in the story.  The "incident" involving the unnamed ambassador goes unexplained, but I think that was the point of the joke so don't bother asking.  Maybe Black was trying to maintain a running gag with the Fast Forward TV series, that once made a funny about Torbin Zixx mistaking an Utrom ambassador's wife for sushi.  "Ambassador jokes".  They'll catch on someday.

Andres Ponce's pencils are cartoony in a good way and he tries to wring some action out of a pretty dull script.  The fight with the Ring Master lasts less than a page, but he throws together a montage panel of the villain evading and attacking the Turtles that looks pretty good.  I appreciate how he rounds the edges of the TMNT's faces, softening the angular look they were saddled with in the cartoon.

Anyway, not very good but I feel rather stupid for judging these UK comics for babies so critically.