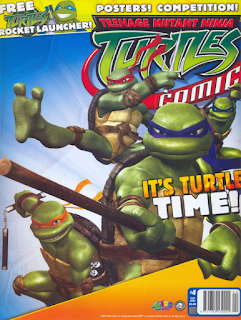 "Ghost in the Shell"

In their lab, Cody and Donatello test out their latest invention by asking Serling to punch Donnie with all his strength.  Serling is more than happy to comply, only to have his fist pass right through Donnie as if he were a ghost.  Michelangelo steps in and asks what all the commotion is about and Donnie reveals that he reverse-engineered one of the cloaks the Street Phantoms use to create a molecular displacement gauntlet.  Mikey begs to play with it, but Donnie won't let him and locks it up in the lab. 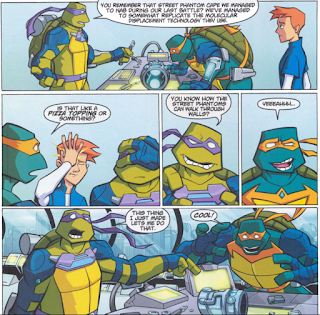 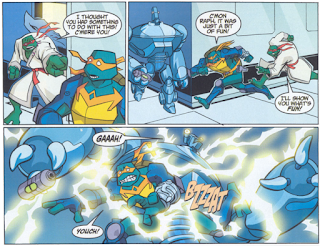 Catching wise, Raph chases Mikey into the hallway.  Not looking where he's going, Mikey passes through Serling just as he was carrying a power cell for the time portal to the lab.  There's a malfunction, freezing Serling up and locking Michelangelo in his intangible state.  Donnie is summoned by Raph and soon figures that the power cell caused the malfunction.  More concerning: If they don't find a way to restore Mikey soon, he'll starve to death. 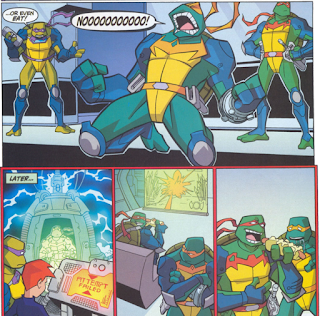 Days of trial and error later, Donnie and Cody program the portal generator to hopefully restore Mikey once he passes through it.  He comes out the other end solid as a rock and quickly removes the gauntlet.  Donnie asks if he's learned a lesson from all this, but Mikey exclaims that he's got some catching up to do and promptly pigs out on the couch.

*While asleep, Raph can be seen cuddling a plush toy designed after Miyamoto Usagi from Usagi Yojimbo (who had also appeared in previous episodes of the 4Kids TMNT cartoon).

I remember an episode of Batman Beyond did something like this, where a journalist uses an intangibility device to sneak into the homes of celebrities and take incriminating videos.  Of course, since it was Batman Beyond, he wound up dying in the most nightmarishly awful way possible.

Luckily, TMNT: Fast Forward WASN'T Batman Beyond, despite kinda sorta trying to be.  This go-around with that plot ends on a much more comedic note and no harm is done.  Well, Serling is never repaired after Mikey fries his circuits, so I guess the issue ends with him suffering while nobody cares.  But that was sort of Serling's whole shtick in the cartoon, anyway.

While the story is pretty good, tying the intangibility gauntlet in with the Street Phantoms and their ghostly cloaks, the pacing seems a little off.  Most of the issue is spent setting up the malfunction that traps Mikey in ghost-mode.  By the time the conflict is established, there's no time left to explore it, so Mikey's dilemma is endured and resolved in a two-page montage.

Nick Roche provides art for this issue.  He favors the angular style that was actually seen in the cartoon, so in a way his aesthetic is more on-model than some of the other artists who have taken turns on this book.  I never cared for the weird hexagon-shaped heads the characters sported in the Fast Forward redesigns, but that's not Roche's fault.  He's just working with what he's got.

Roche would later carve out a bigger niche for himself in IDW's Transformers comics, and he's one of the better artists they've got on those various titles.  His TMNT work is a little lackluster, though I don't think these short UK gag comics really played to anybody's strengths.