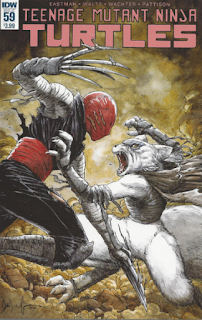 The Turtles return to Foot Clan HQ to find Kitsune, Alopex and several Foot Soldiers attacking Splinter and Jennika.  Kitsune is moments away from planting a knife in Splinter…

Earlier.  Splinter pays a visit to the Shredder’s tomb which is being guarded by Jennika.  Jennika asks why Splinter would honor his enemy with a shrine and Splinter explains that Oroku Saki was once a valued ally before he became the Shredder.  Of more import to Jennika, though, is the fact that he was Master of the Foot Clan and deserves a place of honor regardless of how his reign ended, and all who serve the Foot Clan must honor their past Masters.  Jennika promises to remember that. 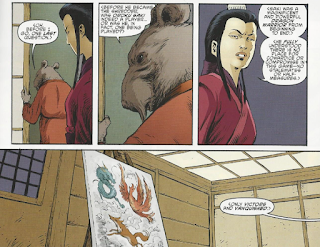 Splinter then pays a visit to Kitsune, who is painting a portrait of a dragon, a fox and a phoenix.  While the fox represents herself and the dragon represents Shredder, Splinter finds the point of the phoenix a bit more elusive.  Kitsune suggests that the figure of death and rebirth personifies hope for a better tomorrow.  Splinter cuts to the chase and starts interrogating her about “the game” she and her immortal siblings have been playing.  Kitsune says that all who exist are part of the game, not just the immortals, though many who participate are pieces to be played rather than actual players.  As Splinter leaves, he asks which type of participant the Shredder was.  Indignantly, Kitsune says that Oroku Saki understood the stakes of the game intimately.

In the throne room, Angel and April have a powwow about Casey.  April’s worried about him following their breakup, but Angel insists that sort of stubbornness is par for the course with Casey.  She tells April not to worry too much; in his own weird way, Casey was doing what he thought was best for her and his friends.  She says that Casey will eventually come around.  Splinter steps in and adds his two cents, agreeing that Casey has a noble spirit and will eventually figure things out.

As Angel puts her Nobody gear back on and gets ready to leave, she asks Splinter if he could check in on Alopex.  Apparently, she’s been acting weird all week and they had to cut their patrol short.  April also excuses herself, heading down to the Foot library to research the scroll some more. 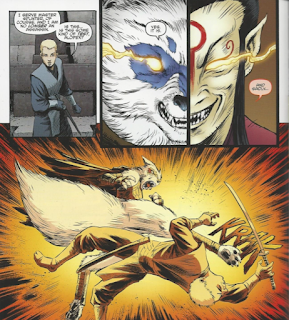 Meanwhile, Kitsune finally uses her telepathic powers to seize control of Alopex.  Being used like a puppet, Alopex goes down to Shredder’s tomb and uses Kitsune’s powers to take control of the Foot Elite Guard stationed outside the doors.  They enter and Jennika tries to stop them from collecting Shredder’s body.  She is taken down by Alopex and the Elite Guard carry Shredder’s remains toward the rooftop where a helicopter awaits.

Splinter is accosted in the halls by Kitsune, Alopex and her army of mind-controlled Foot Soldiers.  Splinter defends himself but is overwhelmed by sheer numbers.  Jennika arrives and protects him, but is quickly cornered by Alopex.  Kitsune then grabs Splinter and raises her knife just as the Turtles arrive. 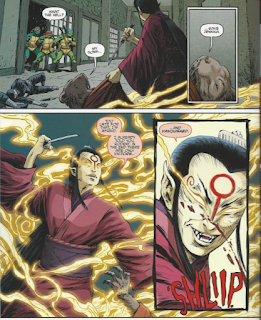 This takes us back to the present.  Splinter tells his sons to protect Jennika just as Kitsune brings her knife down on him.

I love IDW’s TMNT comic.  I’ve been reading it since day one and I’ve never missed a month.  I’ve cataloged and summarized and reviewed every issue so far.  And if you’ve been reading my reviews since I started, you know that when I begin a paragraph with a whole lot of fawning and dull praise, that usually means I’m about to segue into a critique.  Here I go, lads.  Brace yourselves.

You REALLY need to be patient with this comic.  I love it to death, but it takes its sweet time with most everything.

And seeding future plot points in advance is far from a bad thing.  It makes the story arcs feel more organic as they overlap and develop in tandem rather than awkwardly progressing in conveniently segmented succession.

But oh gee willikers, two years for this Pantheon thing to get going is a little stretched out, don’t you think?

And it’s still not really at the fruition point, yet.  This may just be another bump in the road for the arc and then we’ll have to wait again.  It’s more that something has finally HAPPENED after two years of being told to “get ready for it”.  I mean, when did Kitsune first reveal that she had telepathic control over Alopex?  TMNT #37?  When was that?  August, 2014?  Again, just under two years ago?  Yikes.

You can only tease something for so long before the tension and anticipation begin to wear off.  I mean, this isn’t the first arc the IDW guys had seeded for an extended period.  General Krang was teased in TMNT #1 and the Turtles didn’t throw down with him until TMNT #20, but Krang was built up with tiny rewards along the way.  We saw more of his island, more of his warriors, learned more of his plan, learned more of his past...

The Pantheon has been a lot of characters lurking in the shadows, snickering to themselves about how cool and powerful and mysterious they are and JUST YOU WAIT they’re gonna be so rad you have no idea.  It's been two years of demigods wringing their hands and promising that they're going to make their move while never telling us anything substantial about them.  We haven’t gotten those little rewards along the way over these past 24 months of “progress” like we did with Krang or the Mutanimals or anything like that.  At best, we’ve met new members of the Pantheon here and there, and they’ve been neat, but none of them have told us anything of substance that we didn’t already know.

So we’re at the point in the ongoing where something is FINALLY happening with these characters, but the excitement just isn’t there for me.  I’m pretty patient with this book (I endured the 2 year wait for Bebop and Rocksteady from tease to mutation, likewise the near 2 year wait for Leatherhead), but this was a case of the slow burn technique burning me out.  This is the “Chinese Democracy” of TMNT storylines (just kidding; that honor would probably go to The Forever War miniseries or Volume 4 conclusion).

But to circle back from my criticism to get into praise again, there were moments in this issue that held up nicely regardless of whether my enthusiasm had bled out or not.  One little question that had been nagging in the back of my mind ever since Kitsune’s true nature was revealed has been, “Did she really care for the Shredder or was she just using him all along?”  While we don’t necessarily have a full blown answer to that, I think Wachter got a lot of her attitude across in his artwork.  When she barks back at Splinter’s leading question, Wachter imbues her with this look of indignity and subdued scorn.  Clearly, he struck a nerve by making the subtle accusation that Saki never meant anything to her beyond his usefulness as a pawn.

I think giving Kitsune that sort of vulnerability, a mortal affection for someone, helps develop her just a little bit.  And boy, does she need it.  She’s been the embodiment of that snickering “I know something you don’t know but I won't tell” sort of characterization, and she could desperately use something more.  Thus far, her entire character has consisted of her motivation; a motivation that’s been deliberately vague so as to stretch out this storyline to the breaking point.

The new character, Jennika, gets something to do.  She hasn’t really impressed me yet, but I’ll give her time.  She was able to resist Kitsune’s mind-controlling influence, which was a nice way of showing that her change is sincere.  Hopefully we won’t get another “character betrayal” arc in the future; at least not from her.  I mean, we're about to go down that road with Alopex again, right?

All in all, yes, I’m interested in seeing where this storyline is going, but I don’t think I’m so excited for it anymore.  The Pantheon when first introduced were mysterious and cool, but it’s been the same ole song and dance for two years.  Good will isn’t a bottomless resource; if you withhold the payoff for too long, people are going to get bored with you.