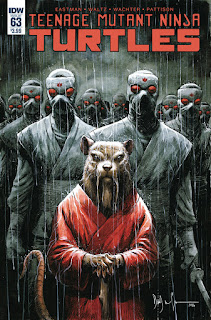 Michelangelo and Raphael arrive at Foot HQ and Donatello clues them in on Harold’s abduction and Splinter’s plan to take out the Street Phantoms that night.  Although Angel has been notified and called in for backup, the Turtles aren’t too thrilled about Splinter’s decision to use Harold as a diversionary “asset” in his war.

At Dun Import/Export, Dr. Meitner rousts Harold, who is none too happy to see her.  She tries to convince him to cooperate with Dun and pool their intellects and resources, but Harold is as obstinate as ever.  Dun then enters, flanked by Jammer and Maze, and decides to try his own hand at convincing Harold to join him. 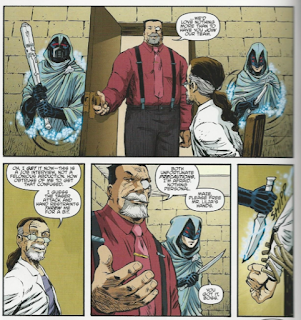 Back at Foot HQ, Leonardo asks Splinter to dismiss Jennika so that the Chunin and his Master might speak in private.  Leo expresses his concerns with Splinter’s decision to keep him and his brothers in the dark, as well as his rather callous treatment of Harold.  Splinter reminds Leo of the time he kept his plans to attack the Technodrome a secret.  He reassures Leo that what he did was right and insists that he is operating under the same logic.  As Master of the Foot Clan, he has to make many hard choices and at times he will have to keep his sons in the dark if he feels their emotions might compromise his vision.  Leo begrudgingly agrees and Splinter orders his sons to get ready.

Meanwhile, Dun tells Harold that he can either work for him willingly or be coerced into doing so.  Either way, Dun is confident that he’ll get what he wants.  Harold continues to reject Dun’s offers and presses a button on his glasses that then emit a bright flash, blinding everyone in the room (except Dr. Meitner, who was expecting it).  In the confusion, Harold escapes the cell.  Enraged, Dun orders Jammer to summon Lupo and his mob. 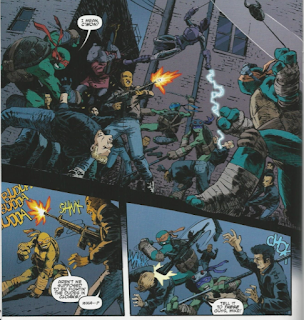 In an alley across the street, the Turtles and Splinter meet with Angel (in her Nobody guise) who has brought them some tech from Harold’s lab.  The Turtles gear-up with goggles that will be able to see the Street Phantoms when they’re invisible and a field generator that will allow them to hit the Phantoms when they’re intangible.  Donnie warns that the only thing that can get in their way is a blast from an EMP gun.  However, the Turtles find that they won’t be facing the Street Phantoms as anticipated, as Lupo’s mob arrives on the scene and opens fire on them.

Inside Dun’s place, Harold makes his way to the fuse box and cuts the lights.  While the Street Phantoms reorient themselves, Harold makes a break for it.  He’s stopped by Dr. Meitner, wearing some exo-suit armor.  “Libby” tells “Harry” that she still loves him, even if they’re no longer married, but she can’t let him escape. 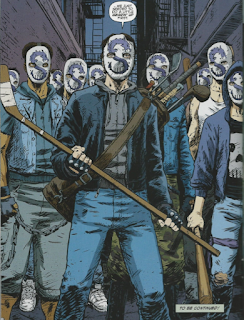 In the alley, the Turtles find themselves pinned by all the gunfire.  They ask Splinter to call in the Foot Soldiers for reinforcements, but he says that he has other plans in mind.  Reinforcements do arrive in the form of Casey Jones and the Purple Dragons, all of whom are now wearing hockey masks with the gang insignia painted on them.

*Splinter mentions how Leo and his brothers did not inform him of their full strategy against the Technodrome until after it had been implemented, which happened in TMNT (IDW) #42.

*Donatello got his artificial bulletproof shell in TMNT (IDW) #49.

Hey, when’s the last time I talked about Harold?  I think it’s been a while, and if I’ve mentioned him recently it’s been as an addendum to IDW’s take on Donatello (with Harold being one of many scientist characters helping round out a team of eggheads assisting the Turtles, as opposed to the usual gimmick of having Donnie do everything brainy).  But Harold’s been around since nearly the beginning of the series, playing an important role in practically every major storyline following his introduction.

He’s worked well as a character for a lot of reasons; the “taking the science burden off of Donatello” bit being only one element.  Harold’s best as part of a team and his grouchy nature lets him work off of just about anybody.  He, Donnie and the Fugitoid make for IDW’s major “brain trust”, at least on the protagonists’ end, and all three characters are major nerds but with wildly different attitudes.  Where Harold has shined most, though, has been in his dynamic with Alopex and Angel/Nobody.  His grumpiness has been the perfect foil for Angel’s wise-ass perkiness and Alopex’s mopey melancholy.

Together, they formed a great trio; one that I hope IDW doesn’t keep broken up for too long.  It’s been something of a wasted opportunity thus far; these fun characters who work so well together, playing mostly bit parts in the margins for years at a time.  They’ve been long overdue for their own miniseries (or arc in TMNT Universe, now that that book’s replaced the character-themed minis).

But what about Harold as a solo act?  Well, in that regard, he hasn’t been the DEEPEST of this book’s cast.  He’s a harrumphing, socially awkward old scientist who has a good heart but a bad attitude.  Not much has been explored in him individually beyond that.  This “Chasing Phantoms” arc seems to be as much about Harold as it has been the other characters and their dilemmas and it finally feels like he’s getting his overdue turn at backstory and pathos.

The highlight of the issue, at least for my money’s worth, wasn’t the fight in the alley with Lupo’s mob, but the intimidation sequence between Dun and Harold.  There’s some great little insights into the character and you get a feel for that balance he’s got going on: Self-destructive stubbornness paired with genuinely confident swagger.  He mentions his friends and how he was sure they’d come to his aid, but in the next breath he proves perfectly capable of fending for himself with his own tricks and intellect.  Harold generally hasn’t been in “action” for quite a while, mostly operating out of the lab, so this was an exciting reminder of what he’s capable of when backed into a corner.

As for other stuff, I rather liked the manner in which Splinter put Leo so promptly in his place.  Leo was about to give him an earful about keeping secrets and acting emotionally disconnected, but then Splinter drops a reminder about the whole “Attack on Technodrome” prelude, where Leo pulled exactly that same shit on him.  It was a nice bit of perspective; Splinter isn’t behaving out of character or even particularly villainously, he’s just doing what Leo did but on an admittedly larger scale.

And then there’s that cliffhanger.  I expected Casey would be commandeering the Purple Dragons, given the events of last issue, but the designer hockey masks were a cool visual touch.  I think I’m going to like where this is going.

On the art side of things, hey, let’s talk about Wachter.  There’s a superb amount of “acting” on the part of the characters during the Dun/Harold intimidation sequence; visually, it did as much to sell the characterization as the script did.  Harold has this insufferable smugness to him while Dr. Meitner is constantly face-palming and eye-rolling with these “oh lord…” expressions.  You can tell that they were married well before the bombshell was dropped near the end of the issue.

And I loved the futility of Dun trying to play the benefactor in that sequence.  He’s this humongous muscle-man with a beard and a monocle; he LOOKS like pure evil.  So the very idea of him trying to be Mr. Nice Guy is ridiculous, and Wachter’s art gets that across very nicely, planting a kindly brow overtop a vein-popping, fist-clenching behemoth.  In that way, it reminds me of Dun in the Fast Forward cartoon, of which he spent the first half masquerading as a good guy when BY ALL VISUAL EVIDENCE he was clearly a super villain.

So yeah, more good stuff.  But “good stuff” is par for the course with IDW’s Turtle book.  I’m digging the exploration into Harold’s history.  It’s something we probably should have gotten years ago, but this book has always had that “good problem to have” situation of too many cool characters and not enough pages to spotlight them all.